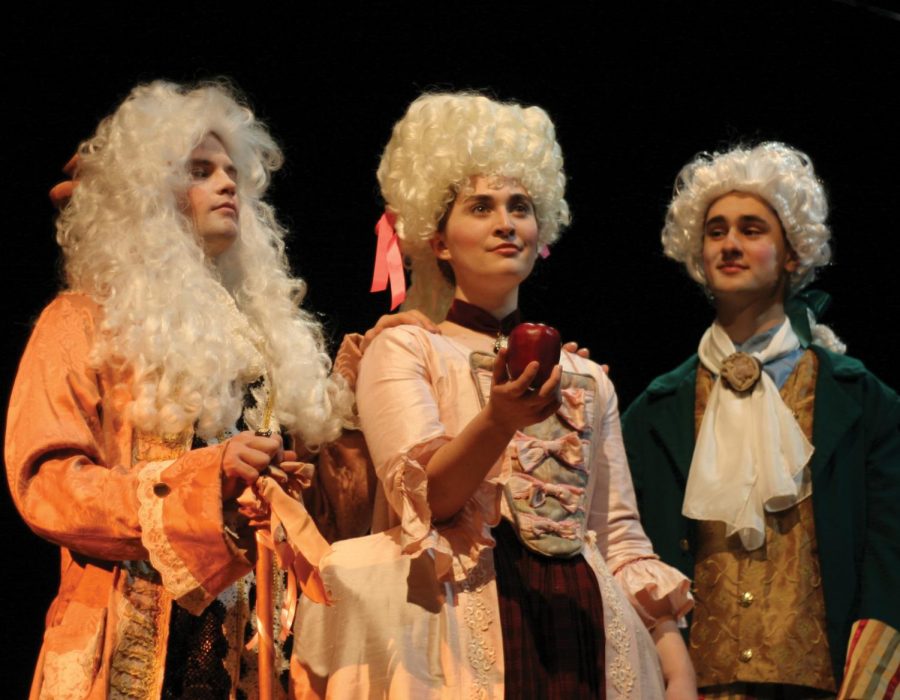 Science, comedy, romance, history and even some sword-fighting combine in Theatre UNI’s upcoming production of “Legacy of Light.”

The show premieres in the Strayer-Wood Theatre on Thursday, Feb. 21 at 7:30 p.m. and will continue playing through Sunday, March 3 at 2 p.m.

Written by Karen Zacarias, the play is based on the true story of Émilie Du Châtelet, a French scientist who lived in the 1700’s. Du Châtelet’s story is presented alongside the fictional character of Olivia, a modern-day scientist inspired by Du Châtelet’s work.

“‘Legacy of Light’ is about women empowerment,” said Bonnie Ruble, the production stage manager and a senior theatre design and production major. “And it is about women in science, and their struggles that are still relevant today.”

Ruble said that much of Châtelet’s work was overlooked by her contemporary and fellow scientist, Voltaire.

“So, it’s also showing that a lot of these things that are happening are still relevant today — showing that women are powerful beings, and they can do pretty much anything and deserve credit for the work that they do,” Ruble said.

Du Châtelet made important contributions to the scientific community, such as her research on energy and light. She was the first scientist to discover that energy was a constant, according to The Concord Consortium. However, her work was seldom credited due to the fact that she was a woman.

She had a relationship with Voltaire; the two of them wrote the book “Elements of Newton’s Philosophy” together. However, only Voltaire’s name made it to print, according to the American Physical Society. Du Châtelet was also a translator, with her French translation and commentary of Newton’s “Philosophiae Naturalis Principia Mathematica” still being used in France today.

Because she rarely was credited for her work, many people have never heard her name. Amy Osatinski, the show director for “Legacy of Light” and assistant professor of theater and directing, hadn’t heard of Du Châtelet until she was a PhD student. “Legacy of Light” was part of the contemporary theater seminar Osatinski was taking. The following year, her university put on a production of the play.

“I love that it’s a play told by a woman,” Osatinski said. “It’s about a woman and it’s really told from the female perspective. It seems silly, but that’s really rare that you find a play that focuses on women and really captures that perspective. I also love the fact that it’s set in two time periods and that those time periods in the play cross. They are sort of — I call it magical realism. It’s a realistic play, but there’s this element of magic to it and science.”

The play has presented Theatre UNI with many opportunities for research. For example, Osatinski says that on one occasion President Mark Nook, who holds a PhD in astronomy, talked to Theatre UNI about the formation of planets. A French professor also helped them with their pronunciation of some of the French words in the play.

“It’s been really neat to be able to utilize the resources on campus,” Osatinski said. “I think [it’s been] really great for the students to understand as theater artists [they should] be well-rounded students of the world and to know how to do that scientific research [because] even if they’re not going to be scientists, they have to play one.”

One of the changes that Osatinski has made to the play under her direction is the addition of a pantomime chorus. These are actors playing characters intertwined with the rest of the story, almost like interludes between scenes. She added these scenes to make sure that the play never stops moving, which is a note Karen Zacarias made as the playwright.

Osatinski hopes that audience members leave the play with questions about the universe and themselves. She hopes the play gets them thinking about what their legacies will be after they’re gone and what they want them to be.

“I hope that the audience takes away the deeper meaning behind the comedy,” Ruble said. “I think I want them to see the struggles that these women are having. And I want them to be able to realize that this is something that’s happened and is still happening.”