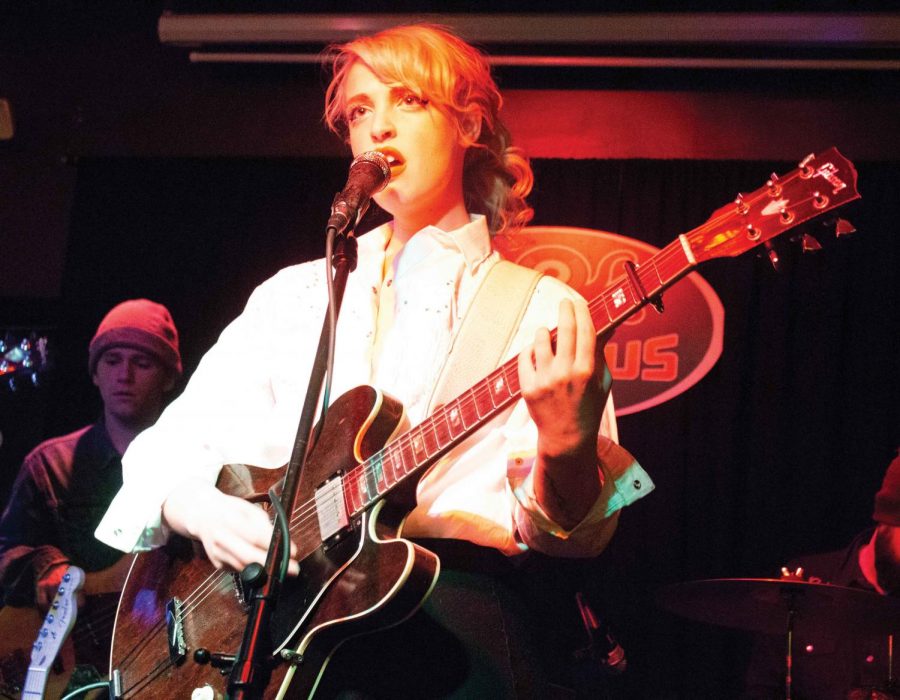 A winter storm rolling into Iowa can sometimes mean canceled plans and events, but not at the Octopus on College Hill. About 50 fans and general local music show-goers came out to see Iowa native Elizabeth Moen perform on Sunday, Feb. 17.

Katie Sin opened up for Moen with a solo set. Similar to Moen, Sin is a folk artist with rumble rock-n-roll influences. The second scheduled opener, Elle Hofmaier, was unable to make it due to the weather.

“Shows are just whatever songs make the most sense to play,” Moen said. “We can be a little rowdy.”

Moen performed with bandmates David Hurlin on drums, Erich Martin on bass and Dan Padley on lead guitar. She said the four of them have been working together for a while now and know the songs by heart.

Moen said that one of the goals she has with songwriting is to only write music that sounds better live than recorded.

“When I hear songs recorded and I see it live, it loses its excitement,” Moen said.

Moen is from Vinton, Iowa, and graduated from the University of Iowa. She started songwriting three and a half years ago and has played guitar since middle school. The 25-year-old singer-songwriter didn’t expect to get into music after college, but now her second album has been successful both in the United States and Ireland, where she toured last year.

Some musicians that have influenced her work include Phoebe Bridgers, Angel Olsen, Courtney Barnett and Jimmy Hendrix. Moen said she loves “that 60’s rock-n-roll mixed with soul vibe.”

“She’s amazing,” Gregorsok wrote. “And I like the fact that she wasn’t afraid to go political.”

During Sin’s set, she performed a song discussing politics and how difficult it is to be a woman in American society. Moen shared a similar sentiment during her set, commenting on how she always feels safe and comfortable performing at  the Octopus.

“It was really good,” Welter said. “She has a cool stage presence.”

Welter said she liked hearing Sin address politics, how she did whatever she wanted and how Moen discussed feeling safe at the bar.

She frequents local music shows in the Cedar Falls area, often attending house shows. She notes that there is usually a difference with live performances compared to recordings.

“There’s a lot more emotion seeing [Moen] live and how much she’s into it,” Welter said.

Welter also said the benefits of frequenting the local music scene is seeing a wide variety of people perform.

Gregorsok said she wished she could attend shows at the Octopus more often.