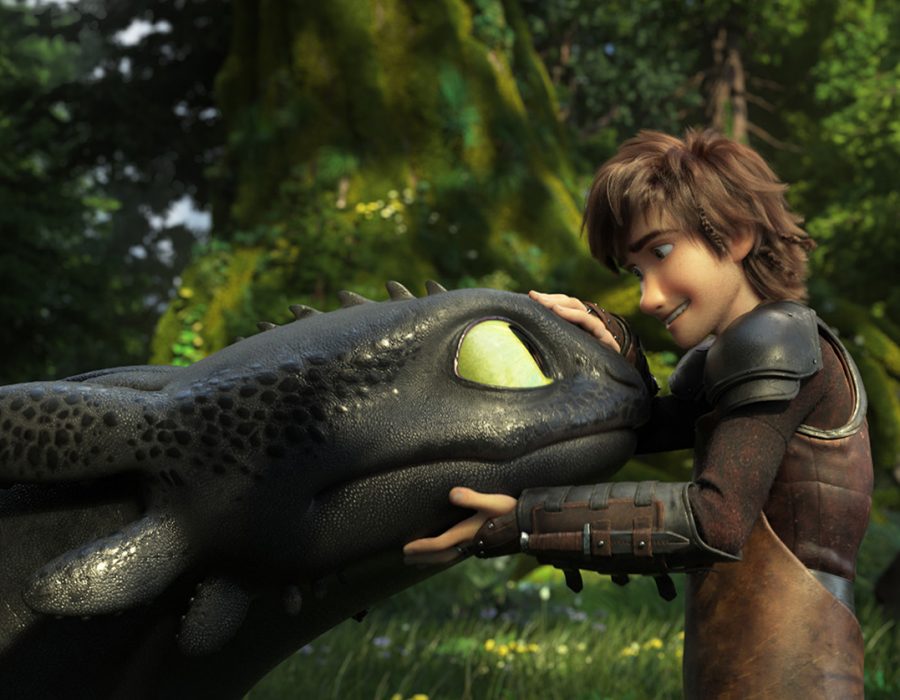 Without many people noticing, the “How to Train Your Dragon” series has become one of the most highly regarded modern film trilogies. The first two installments struck a chord with audiences and critics by telling the beautiful story of a friendship between a boy and his dragon. The third and final film in the franchise, “How to Train Your Dragon: The Hidden World” meets the bar set by its predecessors and caps off a series a decade in the making.

Now the leader of Berk, Hiccup has transformed the island into a dragon sanctuary. Due to their vulnerability and approaching enemies, Hiccup decides to search for an underground dragon paradise known as the Hidden World. At the same time, a new Night Fury mysteriously appears, catching the eye of Toothless. With both their physical and emotional fortitude being tested by new outside forces, both Hiccup and Toothless will have to re-examine their bond and decide what truly matters to them.

First and foremost, this is an insanely gorgeous movie with several stunning shots. In association with the great Roger Deakins, cinematographer Gal Zimmerman has crafted a beautiful breathing world filled with vivid colors. Director Dean DeBlois uses the outstanding cinematography to its fullest potential as a large part of the film takes place in the foreground of majestic vistas. He also stages many of his scenes with single camera movements that make for more believable action.

DeBlois proves to work best without dialogue as he creates great emotional depth through movement and expression. The dragons benefit the most from this as they are developed into full characters, with most being more fleshed out than the humans.

As always, composer John Powell delivers another amazing score. The mix of epic and tenderness makes Powell’s score quite possibly the best part of the film as it combines with the sweeping imagery.

Serving as the sole writer, DeBlois isn’t as good on paper as he is behind the camera.

The script for this entry follows beat for beat with the previous two installments. The main theme of dragons and humans learning how to coexist is heavily touched on, but this time to the point of boredom. I realize it’s the essential crutch of the trilogy, but it’s just tiring to tread the same points for the third film in a row. There’s only so much that can be said until it becomes monotonous.

The film also feels quite overstuffed, as too many supporting characters fight for a small number of good jokes. Most of them turn out to be quite irritating as they only get one trait that wears thin incredibly quickly.

The thread of single trait characters can also be extended to the main villain, Grimmel, whose one defining characteristic is his evilness. Instead of developing him and creating justifications for his actions, DeBlois backs up everything Grimmel does with the explanation that he’s a bad guy who does bad things.

Even with all his faults, DeBlois does a great job with the final act. He effortlessly ends the series on a high note through sequences of heartfelt character interaction that will bring tears to the eyes of audience members of all ages.

Compared to most other animated films, the voice acting is not as high of quality as one would expect.

Jay Baruchel as Hiccup is still pretty good. His voice perfectly captures the character both physically and emotionally.

America Ferrera does equally decent work as Astrid. Her best scenes are the more intimate ones she shares with Baruchel.

F. Murray Abraham does a respectable job as Grimmel. Unfortunately, his perfectly menacing voice is somewhat wasted on a paper-thin character.

Weighing the rest of the cast down is the comedy sidekick trio of Jonah Hill, Kristen Wiig and Justin Rupple. They each sound like they’re on autopilot and end up becoming progressively more annoying throughout the length of the film.

For lovers of the first two films, “How to Train Your Dragon: The Hidden World” is another instant classic. While it isn’t perfect, this finale to a solid trilogy will leave you dazzled by its imagery and touched by its story.