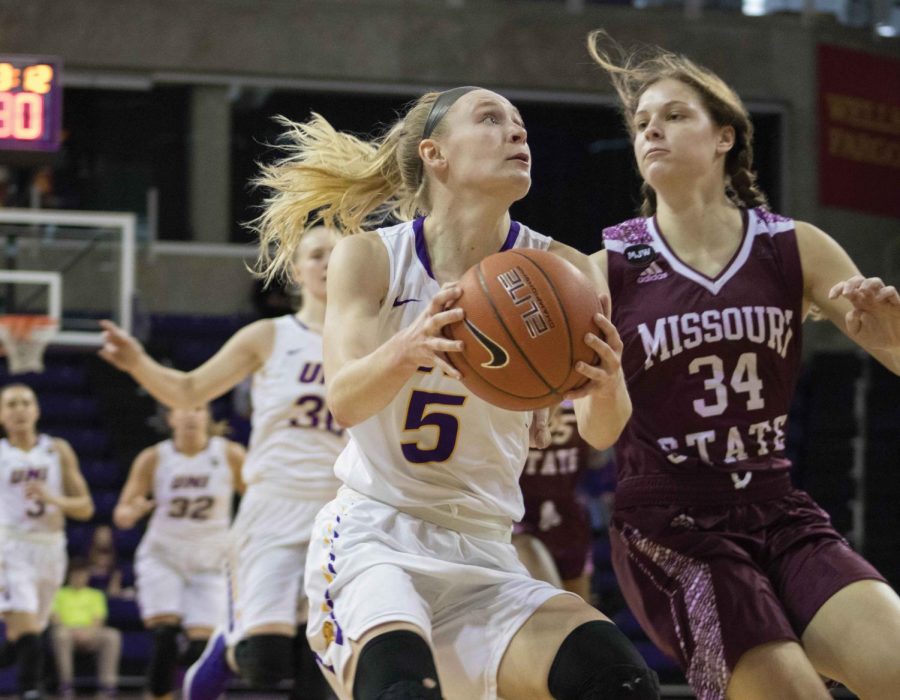 The UNI women’s basketball team ventured out to Carbondale, Ill., to take on the Southern Illinois Salukis on Sunday, March 3. The game was heated, with hard-fought competition between these two conference rivals. The Panthers ultimately outscored the Salukis 76-67.

This was a game of defense, as both teams put up 14 points of turnovers. The Panthers also scored 20 points from the paint.

So far, the Panthers have a winning record of 18-10 and are sitting at third in the Missouri Valley Conference with a record of 11-5.

For UNI, Karli Rucker stands at 5 feet 6 inches tall, but towered over the competition by putting up 28 points. The next leading scorer for either team was Abby Brockmeyer of SIU with 17.

Rucker also grabbed three boards and snatched two steals from the Salukis. Her ability to shoot from downtown was also a difference maker, as she went 6-9 from the three-point line.

Senior Taylor Hagen also played an impressive game with a total of 13 points. Her toughness stood out as she grabbed four boards to help the Panthers moving forward. Mikaela Morgan was also able to put up double digits with 10 points, eight of which came from the free throw line.

The Panthers will return home this week to take on the Braves of Bradley University on Thursday, March 7, and the Redbirds of Illinois State on Saturday, March 9 for their final regular season contests of the 2019 season.