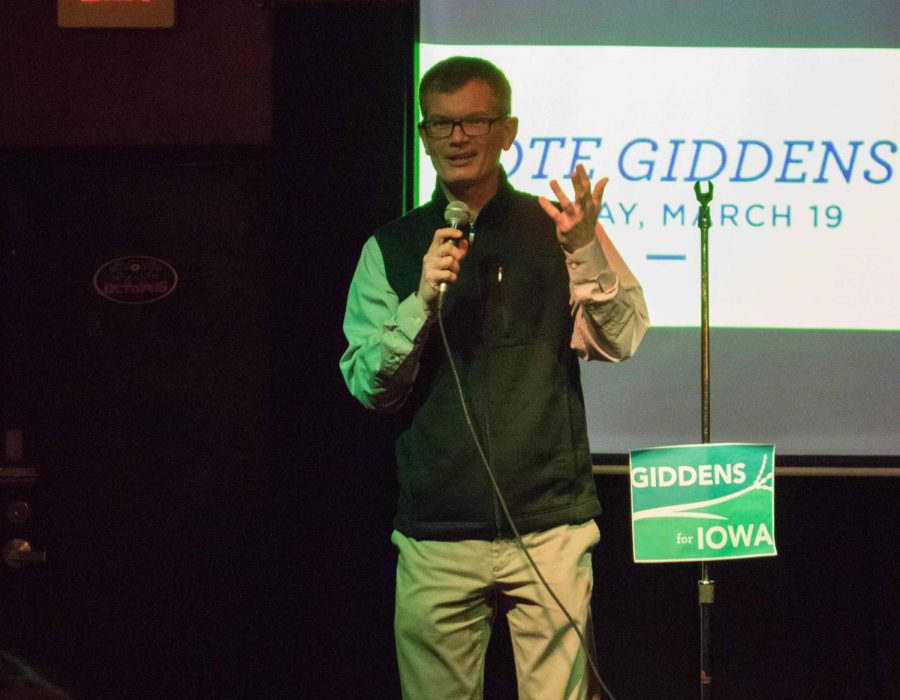 Democratic candidate Eric Giddens speaks at a fundraiser at the Octopus on College Hill on Thursday, March 7.

There will be early voting for the Iowa Senate District 30 election this Tuesday and Wednesday on campus. Students and Cedar Falls community members registered to vote can do so in the Maucker Union from 10 a.m. to 7 p.m. There will also be polls open Wednesday and Thursday from 9 a.m. to 5 p.m. at the Diamond Event Center, 5307 Caraway Lane, Cedar Falls.

This sudden election comes after the resignation of former Sen. Jeff Danielson who resigned on Feb. 14. Danielson cited the Cedar Falls Public Safety Officer (PSO) program and a new position as the American Wind Energy Association’s central region director as his reason for leaving, according to reports from the Waterloo-Cedar Falls Courier.

With his absence, Iowa Governor Kim Reynolds had to select a date for a new election. Reynolds set March 19 as the election date, which falls on spring break for many students in Cedar Falls including UNI and the public school district. There initially was no plan to allow early voting.

There are some people disappointed by the election date, including members of the NI Democrats.

Hannah Gregor, the vice president for the NI Democrats and senior political communications major said, “We were very disappointed to hear Gov. Reynolds scheduled it for spring break. I think that was very intentional.”

According to Democratic campus organizer Sam Blatt, people need to request satellite voting. She helped with the push to get two days of early voting on UNI’s campus and better locations.

The NI Republicans and NI Democrats both tabled for their respective party candidates last week. Candidate Walt Rogers came to the Maucker Union to table with the NI Republicans. Rogers weighed in on the election date.

Rogers has been in politics before as a member of the Iowa House for district 30. He’s a Cedar Falls native, as is his opponent Eric Giddens.

“I want to get down there and represent UNI, and my record in the past eight years in the House show that I’ve been a strong supporter of UNI,” Rogers said.

Rogers also said during his eight years in the House, he helped increase UNI’s state funding by 28 percent. Comparatively, Rogers said it, “Overshadows tremendously what percentage increases that ISU and Iowa both got.”

Giddens is a current UNI faculty member and the Energy and Outreach Coordinator for the Center for Energy and environmental education department. He also serves on the Cedar Falls School Board.

Giddens said March 19 is not a good election date because of spring break. Along with UNI, the local school district will be on break.

“I have a strong background in education and environmental work, and I’ve done a lot of work on trying to improve our community here in the Cedar Valley and other communities as well in Iowa,” Giddens said. “And that’s what I’m most passionate about—improving communities.”

Both candidates discussed UNI’s funding as part of their campaign pitches. Giddens highlighted how tuition increases are in response to low state funding and said he wants to fight to fully fund UNI.

Rogers detailed how he plans on supporting education in the state of Iowa as a whole including lower, middle and higher education.

“I’ve been criticized for not being a supporter of education which is totally false,” Rogers said. “I’ve been part of giving a record dollar amount to schools in the past several years. I’ve never cut education.”

Brenna Wolfe is the NI Democrats social media officer and is supporting Giddens in this election.

“I’m supporting Eric Giddens because he values things that I support,” Wolfe said. “He’s pushing for wind energy. He’s also on the school board, so he has a record of supporting education.”

“He’s a great candidate for UNI because when he was in the Iowa House, he increased our funding by 28 percent when the other state schools, Iowa State and Iowa, only went up by 2 percent each year,” Schindler said. “He’s been in this community, he bleeds purple, so he’s great.”

The NI Democrats have been canvasing the community and tabling for Giddens and held a day of action on Saturday, March 9. Blatt has also been helping people register to vote. The NI Republicans have also volunteered for Rogers campaign and helped with phone banking.

Students and community members can vote early at the satellite locations March 12-14 or on election day March 19 at their respective polling place. People can register day of with proof of residence and identity.