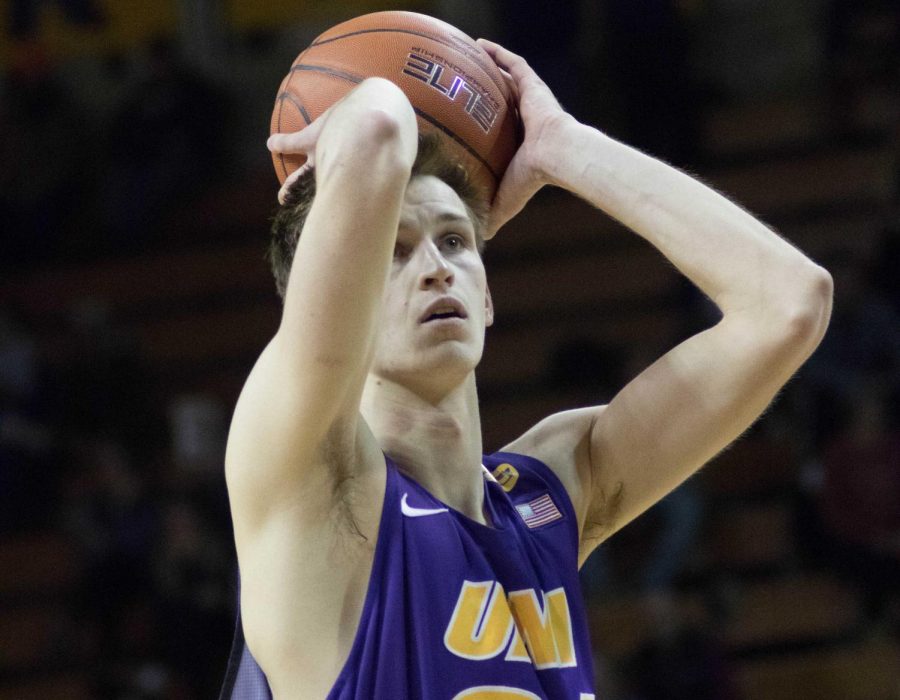 Heartbreak is perhaps the best way to sum up this past weekend for the UNI men’s basketball team.

Riding off the momentum of two upset wins over Southern Illinois University and Drake University on Friday and Saturday in the Missouri Valley Conference Tournament, UNI was looking to make their first NCAA Tournament appearance since 2016.

Standing in their way was the Bradley Braves, who had just come off an upset over top-seeded Loyola-Chicago the day before.

Things were looking promising in the first half, as the Panthers got out to a 14-2 lead and held a 27-15 halftime score, holding their opponent to only 22 percent shooting.

The Braves completely turned the tide in the second half, shooting a blazing 58 percent from the field and outscoring UNI 42-27 overall in the final 20 minutes of play.

With under two minutes to play, UNI center Luke McDonnell was called for a dead-ball technical foul, resulting in four made Bradley free throws, a made basket and a five-point advantage for the Braves.

The purple and gold were not able to cut into the deficit in the final seconds, as Bradley clinched the MVC’s automatic NCAA Tournament bid.

When asked about the crucial call, UNI head coach Ben Jacobson said: “The way the rule is written on a play like that when something like that happens the officials don’t have, it’s not within the rules for the officials to use any judgement on the play.”

Coach Jacobson confirmed that UNI will not accept any other postseason tournament bids, ending their season with a record of 16-18.

The first round of the Missouri Valley Conference men’s basketball tournament saw the 6th-seeded UNI Panthers face off against the 3rd-seeded Southern Illinois Salukis in St. Louis.

The two teams had met twice during the regular season, with SIU taking both contests by single-digit margins. As the saying goes, however, ‘it’s hard to beat a team three times.’ This proved to be true, as UNI came away with a 61-58 victory.

Senior Wyatt Lohaus played 38 of the 40 minutes in the game, and led all Panther scorers with 21 points. Junior Trae Berhow followed up with 11 points and 3 three-pointers.

The men in purple led for most of the game, and by as much as 11 points in the second half. However, a late run by Southern Illinois brought them to within two points when SIU guard Eric Cook made a contested, step-back three point shot with the clock running down to put SIU up 58-57 with around 30 seconds to play.

On the other end, Missouri Valley Conference Freshman of the Year AJ Green made a go-ahead 10-foot jump shot in the lane to put Northern Iowa up one. SIU missed the go-ahead shot on the other end and Spencer Haldeman sealed the game for UNI with two free-throws.

On Saturday night, UNI was tasked with playing their in-state rival, the Drake University Bulldogs in the MVC tournament semifinals.

The teams split the two matchups in the regular season. In a back-and-forth game, UNI was able to pull out the two-point upset victory over the favored Bulldogs. They returned to their first MVC title game since 2016, taking on the 5th-seeded Bradley Braves.

Drake scored 26 points in the paint, while the Panthers were able to hold Drake to 5-18 shooting from three-point range.