‘Us’ provokes through terror 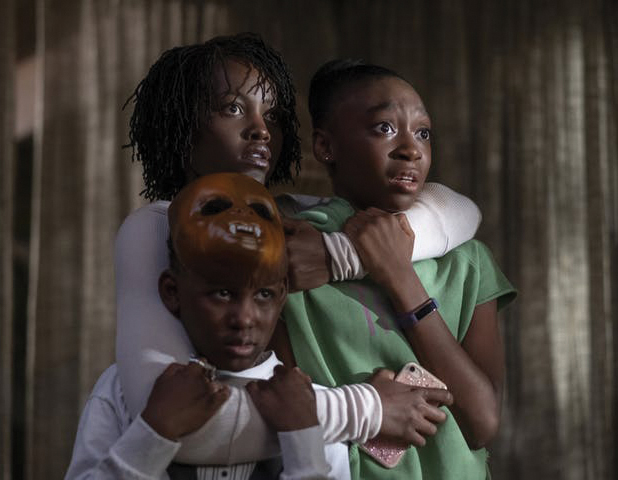 Lupita Nyong’o, Winston Duke, Elisabeth Moss and Tim Heidecker star in the new horror-thriller “Us,” written and directed by “Get Out” creator Jordan Peele. The film received a 95 percent rating on Rotten Tomatoes.

When you hear the name Jordan Peele these days, you instinctively think of his 2017 breakout hit “Get Out.”

Through impeccable directing and writing, Peele created a pop culture moment around a film that was able to be entertaining and thought-provoking. It was so good that the only real critique people had was that it really wasn’t that scary.

“Us” is Peele’s response to that critique, as he delivers an out-and-out horror film that is still able to make you think while it scares the pants off you.

In 1986, a young girl named Adelaide wandered into a hall of mirrors and encountered what seemed to be an evil version of herself. Never really convinced of what she had seen, the little girl turned mute and for years wasn’t able to express herself.

Now, 30 years later, Adelaide and her husband Gabe take their children, Zora and Jason, to that same beach where the incident happened. Adelaide tries to keep calm for her family, but the thought of that childhood moment keeps lingering in her mind.

Unfortunately, only a day into the vacation, that evil doppelgänger returns to get its revenge, and this time it has a family identical to Adelaide’s, all armed with scissors.

With his second directorial gig, Jordan Peele proves that “Get Out” was not a one-hit wonder and that he is a fully accomplished director. While still delivering the scares, he takes the home-invasion thriller genre and gives it a much larger scope.

This feat is accomplished through his expert use of camerawork, which is used to push the narrative as much as possible. A mixture of long takes and pan shots keep the story moving and give off a constant feeling of suspense. When opting for quicker shots during bursts of violence, Peele incorporates well-timed cuts that perfectly match the tone of the scene.

As noted in “Get Out,” Peele knows how to use music as a storytelling tool. That skill is put on full display here as he combines usual horror music with modern hits such as “I Got 5 on It” and NWA’s “F— Tha Police.” Every music choice here is just right and heightens the power of each scene.

Note: It is quite hard to critique certain story elements without revealing essential spoilers that would ruin the viewing experience. In service of this, I will be quite vague when it comes to specific details.

His script is filled with questions referring to themes of classism in America and the duality of man. Little answers are given for these big questions, seemingly on purpose in an effort to let the imagination of the viewer run wild.

Unfortunately, while I do respect Peele’s honorable intent, I feel that he has set his sights too high and isn’t able to come full circle on his ideas.

A few plot holes pop up from time to time, most notably during the third act when Peele decides to dump exposition in one short sequence. Little payoff was given for important questions that had been building since the beginning, leaving me feeling unsatisfied.

Coupling this misstep with the ambiguous ending quickly makes the narrative lose its luster. Many questions I had came more from the film’s faults rather than its merits.

Lupita Nyong’o is absolutely perfect in her dual roles. Her performance as the conflicted heroine of Adelaide is top notch. Equally great, if not better, is her turn as the doppelgänger Red, where she is downright terrifying as she moves around the screen with menacing precision.

Winston Duke is great as Gabe, who offers some comedic relief from time to time. Duke ingeniously uses his physicality for both roles as he loafs around to make his human character seem like a teddy bear and stands tall and bulky for his fearful doppelgänger.

Both the child performances by Shahadi Wright Joseph and Evan Alex deserve applause. They don’t fall into the usual trap of overacting and are able to make the audience genuinely care for them.

The rest of the cast, consisting of Elisabeth Moss and Tim Heidecker, are fine in their own right but hold nothing compared to the main troupe.

While it could be considered as slightly inferior to his previous film, Peele’s “Us” is still leagues ahead of the usual movies that file under the horror genre.

Best seen going in as blind as possible, this film will have you captivated during its two-hour runtime, along with the subsequent days proceeding.