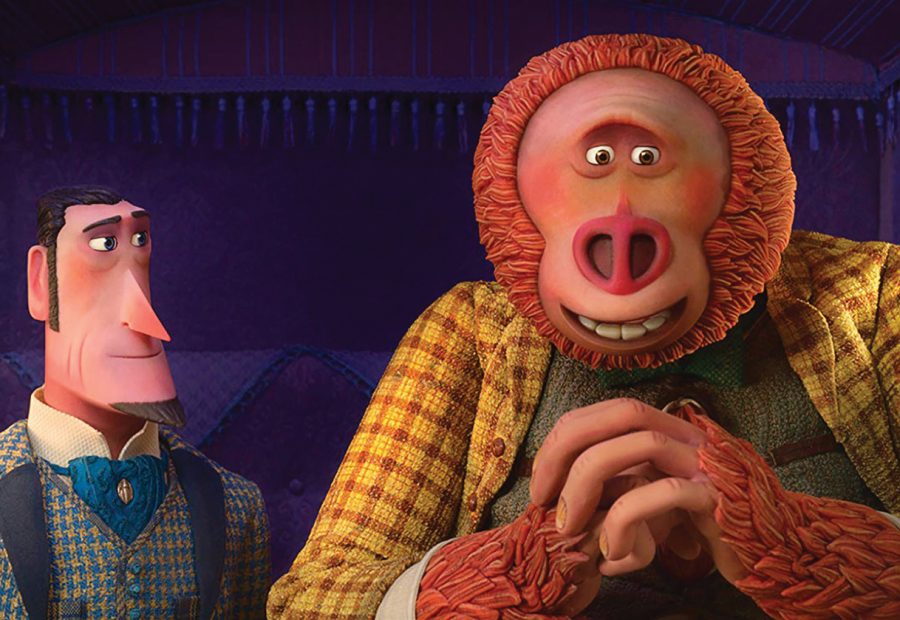 Priding themselves on craftsmanship and hard work, Laika Studios has carved out a special spot in the modern animation industry. Their preference for stop-motion over computer effects has led to some dazzlingly authentic films such as “Coraline” and “Kubo and the Two Strings.”

The studio’s newest film, “Missing Link,” follows in the same high-quality footsteps laid down by its predecessors.

The story begins in the early 19th century and introduces us to Sir Lionel Frost. He’s an explorer who longs to become part of the high society of “great men.” In order to gain entry to the club, Lionel must prove the existence of a mythical creature: The Sasquatch.

He immediately treks to the United States and finds the creature, who surprisingly has the ability to both write and speak. Lionel dubs the creature the name Mr. Link, playing off of the fact that he is the missing link between early and modern humanity.

Link longs to be reunited with his Yeti cousins in the Himalayas, a trip Lionel agrees to partake in as long as he gets the proof he needs. Through their long and treacherous journey, the duo venture into unexplored areas within the world and within themselves.

Laika everyman and “ParaNorman” director Chris Butler stepped back into the chair for this film.

Just like all Laika productions, the animation and set design within “Missing Link” are simply outstanding. The characters and the multitude of diverse sets are a marvel to look at and experience. Throughout the film, you get a genuine feeling of the unfathomable amount of hard work that each artist put in.

Butler’s direction of the story is just as meritable as his handling of the animation. He treats the narrative like any other and doesn’t downplay any of it in order to cater to the younger audience. The emotions and themes are quite sophisticated and actually make you think about what you’re watching. It’s a tragic fact that only a few children’s films like this one deal with tough subject matter, which is something I was reminded of when watching the mindless trailers that played in front of this film.

One fault that can be mentioned about Butler is that his pacing is lightning fast and tended to negate some of more the important character development that he had tirelessly worked for.

Also serving as the sole writer, Butler does a decent job at telling a wholesome story with lasting themes.

It becomes apparent that Butler never compromised his vision for kids as he doesn’t try too hard for jokes. He goes for quality over quantity as there aren’t as many funny moments as you would expect. This turns out to be a pleasant surprise and allows for the story to flow better without the need to constantly crack a joke.

The main ingredient of the touching story is simplicity, which from time to time restricts the viewer from having a deep connection with the film. The main group of characters is decently constructed but just aren’t developed enough for us to get a sense of knowing them.

This theme of underdevelopment is also illustrated in the rapidly paced plot that doesn’t seem to want to slow down and bask in the beauty. We’re always racing to the next destination or story element, leading to a rushed ending that doesn’t reach the emotional heights of the studio’s previous films.

Laika films in the past have tended to have lesser-known casts, but this time they went for a more a star-studded lineup.

Zach Galifianakis is excellent as Mr. Link. His soft and innocent voice perfectly embodies the character’s kind and lovable traits.

Hugh Jackman is great as Lionel Frost. Jackman uses his macho voice for the initial scenes of his self-centered character but later gets to be gentler as his character begins to mature.

Zoe Saldana does her best as Adelina, an adventurous spirit that tags along with the pair. Unfortunately, Saldana doesn’t get a lot to do other than being the stereotypical female voice of reason between two male characters (although it is not entirely clear what gender the beast is).

While centrally a kid’s movie, “Missing Link” tells a heartfelt story that can be enjoyed by all ages. It’s not the best quality from the always dependable Laika, but it is mesmerizing to watch and will send you home with a smile and a slight sense of wonder.