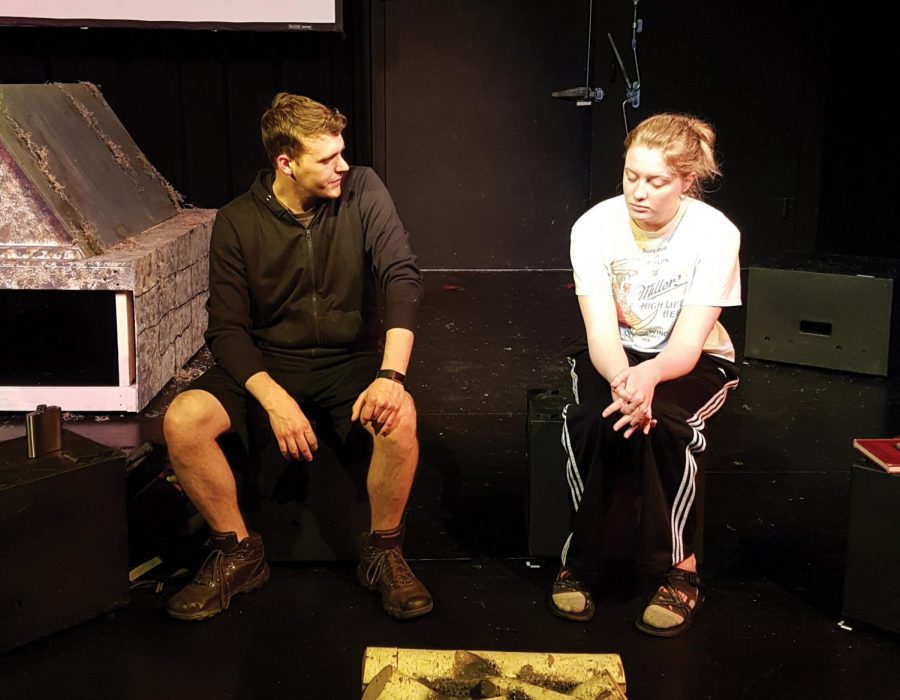 Theatre major Brittany Starr tells the story of her ancestor Belle Starr in her production titled "Bandit Queen," showing in the Interpretors Theatre at 7:30 p.m. on April 25, 26 and 27.

Brittany Starr was fascinated when she heard stories about her outlaw relative Belle Starr.

As her grandfather, James Starr, spoke of Belle Starr’s hilarious exploits, Brittany  Starr wanted to know more about her larger-than-life tales. After speaking with a guest artist over lunch, Starr decided to write, direct and star in her own play production titled “Bandit Queen.”

“Jay and Eliza are college students,” said Starr, a senior majoring in theatre with a performance emphasis. “Their American history professor told them that as extra credit for their project, they can hike up to Belle Starr’s grave and research more about her. Essentially, they’re hiking up there to get a feel for what she went through. Her tomb is by her cabin spot and along the way there, they realize that Belle Starr is actually there. She was messing with them the entire time and she’s helping them understand that women have been treated unfairly in her time and in today’s society.”

Starr faced several challenges while making the production. She performed extensive research on her past relative through websites such as Ancestry.com. She had to juggle a full-time job along with her responsibilities as a student and acting in other performances. This was all in addition to the casting process and figuring out the blocking.

During the production, Starr received assistance from Danielle McGeough, a professor of communication studies and the artistic director of the Interpreters Theatre.

Although wearing multiple hats was a challenging experience for her, Starr has still enjoyed working on the production.

“I love directing this production and working with the amazing cast and crew that I have,” Starr said. “I might have gone insane without them, so bless their hearts. I don’t get a chance to direct too often, so it was nice to get a chance to expand my areas and dive into something that I don’t normally do.”

Assistant Director Jessica Buchanan has enjoyed that her position has allowed her to focus on the less technical aspects of the production, such as developing the movements, moments and lines of the characters. These aspects included the relationships between Jay and Eliza, along with Sam and Belle. Buchanan said she found Sam’s character particularly interesting becuase he was nonverbal. This made Sam’s expression of love for Belle difficult, but overall, she still believes that it was a fun process.

Since the play is a Western, acquiring the costumes involved a combination of buying them online and renting them from Strayer-Wood Theatre. Some characters had different costuming requirements, however.

“For Jay and Eliza, I just knew that they were going to be in normal, casual clothes,” Starr said. “I let those two actors run free with whatever they thought their character would wear. It turned out great.”

As audience members walk into the theater, Starr hopes they’ll arrive with an open mind. The show is free and open to the public, so everyone is welcome to explore the issues at hand. She wants them to take the topics in the show to heart and realize that it is still difficult for women in this day and age. While the show has dancing and comedic elements, it also features some heavier themes such as femicide.

“I specifically hope that men will come to the show and learn how Jay did. With their help, we don’t have to be afraid anymore,” Starr said. “We can take the step together towards being equals.”

The “Bandit Queen” shows in the Interpreters Theatre at 7:30 p.m. from Thursday, April 25, to Saturday, April 27. Tickets are free and can be reserved through Eventbrite.