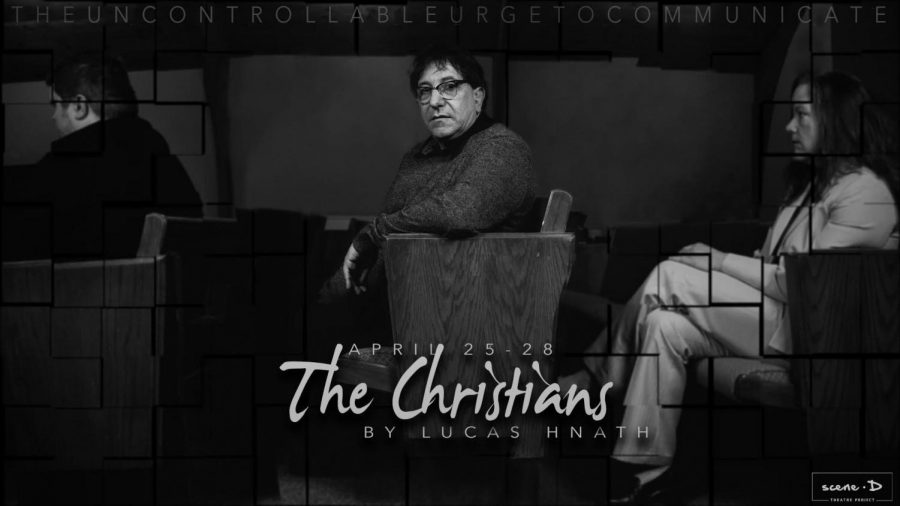 Associate Professor of English Grant Tracey portrays a pastor having a crisis of faith in an upcoming theatre production, “The Christians.”

Scene D was founded in 2018. The project, headed by Orion Risk and Jacqueline Kehoe, focuses on showcasing works that highlight those who would not normally be at the forefront of a story, as well as current issues that affect everyone.

“We always look for scripts that we’re in love with, so we read dozens and dozens,” said Risk. “When I read this, I was like, oh wow. This is a complicated story, it has deep things about humanity, it makes me think multiple times and I think every person who watches it will walk away with something different.”

“The Christians” was written by Lucas Hnath, a Tony-nominated playwright. It follows a pastor named Paul, played by Tracey, who founds a church that grows and becomes larger over time.

“He’s doing really well, but he has a moment of conviction. He’s like, ‘Oh shoot, something I believe has to change because it’s not right,’” Risk said. “So, he gets up in front of his entire group and says, ‘Look, we have to believe a different thing,’ and the play follows from that moment.”

According to Risk, the play is about the complicated nature of belief, as well as, how can leadership decide the direction of a group?

“This play, it’s called ‘The Christians’ because all of these big questions about belief and leadership and communication are dissected inside of that space of Christianity. Most everyone in some way or another will probably have been touched by that culture.”

The play will also feature Kim Groninga, an adjust professor in the Languages and Literatures department, and the set design was largely created by TheatreUNI students.

“For me personally, I am really inspired by seeing other people making happen the other things that they want to make happen, and so if you’re like, wow, I have my own secret dreams and a sense of my potential, then come see what we’re doing, and let it excite you,” Risk said.

Tickets cost $15 for the general public and $10 for students with ID. Run time is 90 minutes with no intermission.