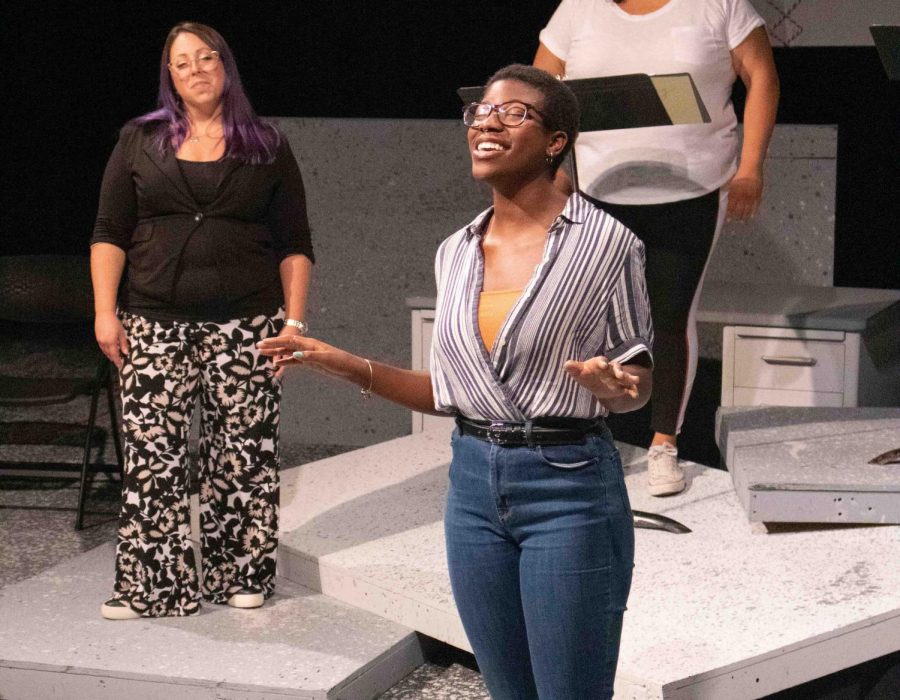 TheatreUNI explored issues of diversity and representation of minority groups in theatre during their cabaret production of "Anything You Can Do, I Can Do...?" on Sept. 6 and 7 in the Bertha Martin Theatre.

TheatreUNI presented “Anything You Can Do, I Can Do…?” on Sept. 6 and 7, a cabaret performance highlighting the conversation surrounding diversity and representation in musical theatre.

Performed in the Bertha Martin Theatre, the show was written by assistant professors of theatre Jim Bray and Amy Osatinski, who were awarded a summer fellowship from the Graduate College at UNI for the creation of the piece. The production was developed over the summer with the help of students Tatiana Sandoval, Caroline Henry, Zoella Sneed and Abigail Chagolla — all of whom identify as black or Latinx.

The production touched on the historical representation in the theatre of Asian, Latinx, black, Jewish and LGBTQ+ people through the musicals “South Pacific,” “West Side Story,” “Miss Saigon,” “Porgy and Bess,” “Fiddler on the Roof,” “Falsettos” and others.

After an impressive commencement by Bray and Osatinski, featuring the show’s namesake, “Anything You Can Do” from the musical “Annie Get Your Gun,” the cast began performing pieces from roles in which they would never stereotypically be cast.

Bray gave a moving performance of “She Used to Be Mine” from “Waitress,” in which the character portrayed is a pregnant pie-maker. Picturing a bearded professor as a pregnant baker was a humorous and lighthearted way to introduce the show’s theme, a type of humor that seemed to be a trend throughout the show. The format of the show, which was a combination of staged reading between musical performances, allowed the show to remain lighthearted, conversational and captivating.

“Anything You Can Do, I Can Do…?” invited the audience to learn more about inclusivity, representation and appropriation in the form of a healthy conversation, while remaining honest and non-accusatory. Aside from its important message, the show featured incredible renditions of musical theatre staples, which was a treat in itself.

Although it considered the future in a positive light, the show was unafraid to condemn the blatant racism, cultural appropriation and ignorance laced throughout the history of musical theatre.

They called out the Hungarian State Opera, which, this spring, asked members of an all-white cast of “Porgy and Bess” to sign a letter stating that the “African American spirit” was a part of their identities, because the musical’s creators specifically state that the characters of Porgy and Bess must be portrayed by black actors. The UNI cast emphasized the ridiculousness of this happening in 2019. This show took an effective angle in addressing the discrediting of insensitive behavior and normalized injustices.

After an intermission, Act II began with a jovial compilation of Disney musical hits and featured the vocal capabilities of all six performers in roles that they would not typically play. Their creativity and hilarious choreography had the audience laughing for the remainder of the show.

The production concluded with a thought-provoking and memorable performance of “I Am What I Am” from “La Cage Aux Folles,” in which each cast member shared about who they were and how they proud they were to be who they were. After reflecting on Friday and Saturday’s performances, the crew expressed hopes to refine the show and present it to a wider audience in Iowa and beyond.

Roman philosopher Horace was quoted in the show’s program as saying the purpose of theatre is to both “teach” and “delight.” This creative, witty, and didactic production certainly achieved both of these goals. Viewers left the theatre glowing from a night of breathtakingly performed musical theatre classics, as well as much more informed on the history and current obstacles to diversity in the performance world.

A compilation of resources regarding the issues in the show are provided at bit.ly/anythingcabaret.