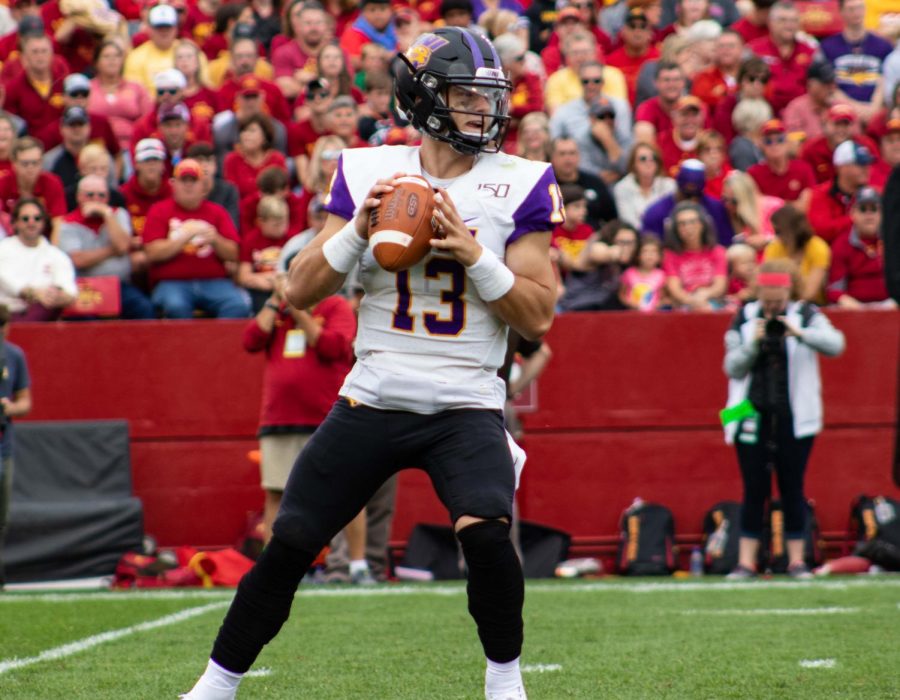 Much like head coach Mark Farley, redshirt freshman quarterback Will McElvain walked on to the Panther football team with the goal of eventually becoming a starter.

Hard work and dedication made that goal come to fruition.  In his first collegiate start, McElvain went 25-42 for 228 yards and one touchdown, coming up just short against Iowa State in a 29-26 triple overtime thriller.

McElvain’s work ethic shined through in his second start, improving on his first showing going 17-25 for 262 yards and three touchdowns in his UNI-Dome debut against Southern Utah in a 34-14 rout.

“I have just kind of invested it [work ethic] in myself from where I grew up going to a school in Des Moines in the inner city,” McElvain said.  “Went to Lincoln [High School] so that’s just how we go.  You have to work for it.  We’ve always been the underdogs,  and I came here and was an underdog.”

McElvain calls himself an underdog, not only because he was a walk-on, but also after several colleges questioned his height at 5-foot-11.

“There were a lot of schools that weren’t too interested in me for whatever reason like my height, or if they were they wanted me to play a different position,” McElvain said. “Then I came to UNI … They were going to give me a chance to play quarterback, so I just felt like I was more appreciated and more wanted here.”

McElvain originally committed to Iowa State, but chose to walk on at UNI instead knowing the chance he had to earn the starting quarterback spot.

Coach Farley, who is known as the walk-on from Waukon, IA, can attest to the work McElvain has put in not only to become the starter, but also to become a great quarterback.

“You ought to see the guy during the week,” Farley said.  “He works at it from the time he’s up in the morning until he goes to bed at night.  He’s the last one off the field every night.  He’s up in the offices all the time.  His production isn’t just happening.  He’s prepared.”

After countless hours of working on his craft, McElvain is starting to see his hard work pay off.

“It means a lot because it’s been a long time coming,” McElvain said.  “I originally walked on at UNI so I think the work that it’s taken me to get here, and not even knowing if I’d be able to play quarterback at this level because of the way I was recruited … makes me appreciate it that much more.  I think it makes me appreciate it much more for the journey that it’s been to get there.”

The journey came full circle for the Des Moines native in his debut against the Cyclones in Ames.

“Playing at Iowa State was sweet because it was like a homecoming,” McElvain said.  “It’s like 40 minutes from home.  I had a lot of family there [and] I had a lot of friends there from high school.  It was also my first game so it was surreal to kind of be back in your hometown in a sense for your first college start.  Then that doubled with [playing against] a school that I was once committed to.”

Facing the team that he was supposed to play for gave McElvain extra motivation to put his talent on full display.  “I was committed there so I kind of had a chip on my shoulder going into that game,” McElvain said.  “I wanted to play well in that game … It was an awesome first game.  You can’t really ask for a better scenario than that.”

McElvain looks to lead UNI at the helm for years to come with big goals for this season.

“Just start with getting in the playoffs,” McElvain said.  “Once we get there take it one step at a time, and obviously try to win a national title.  I think the pieces are there.”

From the first time McElvain visited UNI, he knew it was the right school for his future.

“It was just a welcoming visit,” McElvain said.  “When you’re kind of deprived of that, as hard as you work and those things aren’t happening, once you finally get that it’s kind of a warming feeling.  It just felt like I was wanted.  It felt more like home.”