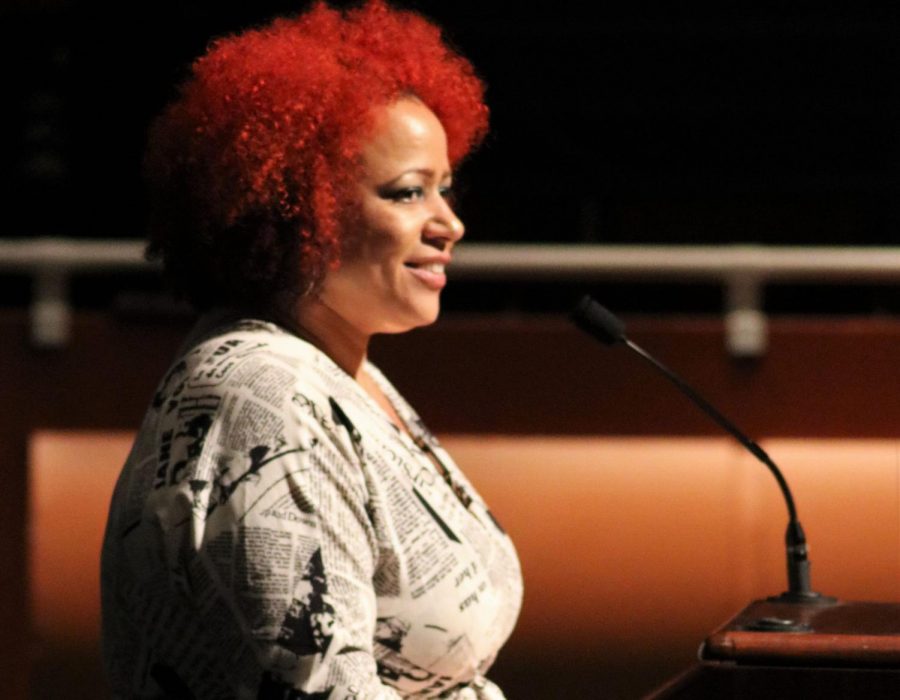 A Waterloo native, Hannah-Jones works as an investigative journalist for The New York Times Magazine, where she covers topics of civil rights and racial injustice.

“Tonight’s lecture is part of a much bigger effort which aims to increase dialogue across the state about complex public issues and to equip students, faculty and staff with the skills to build a shared understanding of challenges, to empathize with experiences very different from our own and to create positive change from collaboration,” said UNI President Mark Nook as he introduced the speaker.

Originally, Hannah-Jones’ planned lecture was titled “Separate and Unequal: Considering Modern Day Segregation and the American Constitution.” However, as she began her talk, Hannah-Jones told the audience that she would be going “a bit rogue” and would not be speaking on school segregation, but instead on the 1619 Project.

At the mention of this, the audience erupted into applause.

The 1619 Project is an interactive collection of essays and other works, organized by Hannah-Jones and The New York Times, in observation of the 400th anniversary of American slavery. Hannah-Jones said the topic of her lecture, while seemingly unrelated to the anniversary of the ratification of the U.S. Constitution, was “perfect timing.”

“So much of the 1619 Project is talking about how our Constitution failed many of the citizens at our founding,” she said, “and how it has actually been black Americans who have worked the hardest to make the ideals of the Constitution true.”

Hannah-Jones outlined a history of slavery in the United States, from its inception in 1619 to its legacy that prevails today. She asked the audience to consider their misconceptions about American slavery.

She painted a picture of Thomas Jefferson penning the well-known liberating words of the Declaration of Independence with a young Robert Hemings sitting beside him — his half-black brother-in-law, serving him as a slave. The original draft of the Declaration had actually mentioned slavery and criticized it, she said. However, some founders disliked the implications of the criticism — namely, that their newborn nation would have to abolish slavery or else face accusations of hypocrisy — and struck the passage from the Declaration.

“This is our founding paradox,” Hannah-Jones said. “At that moment, we decide that we are going to enter as a brand-new country in the world, based both on the idea of individual freedom and also on the idea of absolute bondage.”

Hannah-Jones described slavery as an “American endeavor,” with all branches of government and all aspects of the U.S. economy and society coming together to uphold the institution. She noted that American slavery was the first to establish heritable servitude based solely on race, with slaves treated as property and experiencing a permanent “social death.”

Moving on to the Civil War, Hannah-Jones struck down the misbelief that the U.S. was a leader in abolition, noting that only two other countries in the Americas took as long to end slavery, and only one other country, Haiti, required a war to do so.

“We were the only other country that literally had to have a civil war, the bloodiest and deadliest war in the history of our country, to end slavery,” Hannah-Jones said. “This tells you how important slavery was to us.”

Hannah-Jones also exposed the hypocrisy of Abraham Lincoln, the “Great Emancipator” who planned to have emancipated slaves shipped out of the U.S.

“And instead, black Americans do this thing that really logically doesn’t make sense,” she said. “Instead, we said, ‘we are going to stay here and we are going to fight to perfect this democracy.’ Because black Americans actually believed in the ideals of the Constitution, even when the founders did not. That’s the most beautiful thing to me. And so they fought.”

After a brief 12-year period of Reconstruction during which black Americans served in government roles and key pieces of civil rights legislation were passed, federal troops withdrew from the South, and white southerners took over and reinstituted a “quasi-slavery” through racial terror, Hannah-Jones said.

During the second civil rights movement in the 1960s, black Americans found themselves fighting for rights which had already been guaranteed in the Thirteenth, Fourteenth and Fifteenth Amendments a century ago.

“Laws that are not enforced are just words on paper,” Hannah-Jones said.

“When black Americans fought for civil rights, they never fought for civil rights only for their own,” she said. “Because people on the bottom understood more than anything that no one values freedom more than those who have never had it. And so, instead of selfishly trying to only get rights for themselves, they understood that as long as any person, any group was being oppressed, that their own freedom was in jeopardy.”

In discussing today’s continuing battle for equality, epitomized in the Black Lives Matter movement, Hannah-Jones placed herself in the context of history. Ten years before her birth in 1976, it was legal to deny her housing, and it was illegal for her to exist in some states since her black parents could not legally marry. Fourteen years before her birth, it was legal to say she couldn’t use a library, a swimming pool, a park or a school.

“I am not an old woman; this is not ancient history,” she said. “So when we understand that I am part of the first generation of Americans since 1619 who was born in a country with full legal citizenship rights, then we should not be astounded that we have so much progress to be made.”

Hannah-Jones said she initiated the 1619 Project to reveal aspects of American life demonstrating the lasting legacy of slavery — everything from the nation’s high sugar consumption and its low rate of labor union membership to its broken educational system and dysfunctional politics.

“I want people to understand: you can’t contain the harms of our original sin,” she said. “We think that those harms only hurt black people, but they actually hurt all Americans because our fates are intertwined together.”

Hannah-Jones brought her speech home by pulling up a screenshot of a news article titled “Waterloo confronts list’s label as worst area to be black.” While she joked that the Waterloo mayor would be aghast that she had mentioned the article, she also lamented the label and called for change.

The audience was left with a charge to “reframe” the way they see black Americans: to see them not as a problem, but as “perfectors of democracy.”

“We have fought for democracy to turn this country into the country of our ideals,” she said. “What a powerful country we would be if everybody in this room actually believed in the America that black people have believed in, and treated all of our citizens as if we are all worthy of the country that we are trying to build.”

Hannah-Jones was met with a standing ovation, cheers and whistles resounding through the nearly full auditorium.

Following the lecture, audience members were able to participate in a 20-minute question-and-answer session with Hannah-Jones. In the GBPAC lobby, the League of Women Voters of Black Hawk & Bremer Counties had a booth where people could register to vote.

Monday’s event was sponsored by the American Democracy Project, Chief Diversity Officer Gwenne Berry and the Office of the Provost.