Keep the light on for Banned Books Week 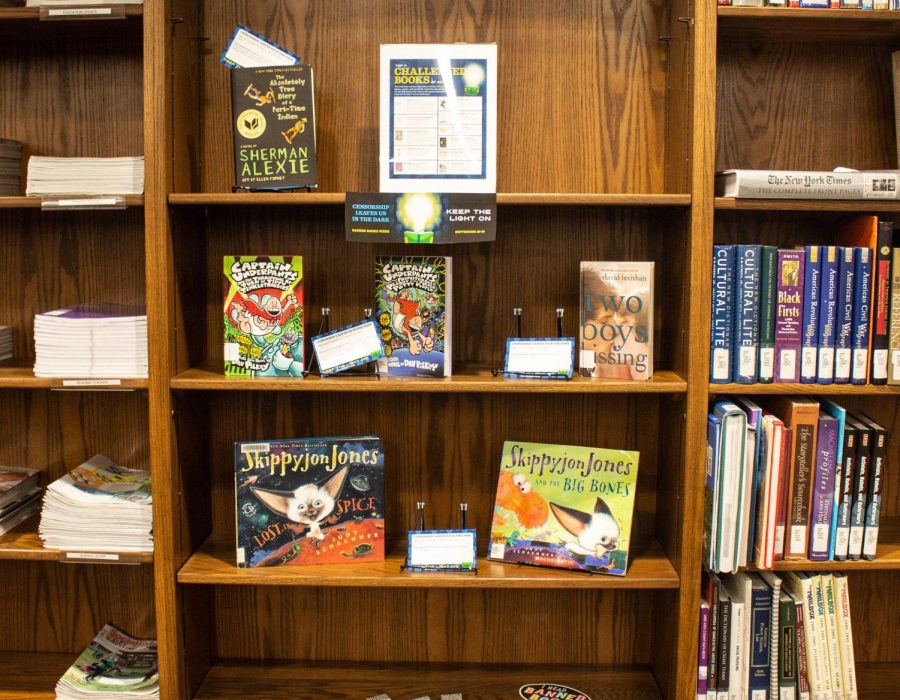 The IRTS Lab in Schindler Education Center is showcasing a display of challenged literature in observation of Banned Books Week from Sept. 22 to 28.

Rod Library and the College of Education are observing Banned Books Week alongside the rest of the nation this week from Sept. 22 to 28.

This year’s theme is “Censorship Leaves Us in the Dark: Keep the Light On.” A display highlighting recently challenged books is located in the HNI Corporation Instructional Resources and Technology Services (IRTS) Lab in the Schindler Education Center.

“Banned Books Week is an important observation,” said Katelyn Browne, youth services librarian. “It helps us have this conversation once a year about, you know, why would a library have a book that I think is inappropriate, or is scandalous, or is 100 years old and is pretty racist now?”

Although some literature for adults does spark controversy, Browne said it is most often books for children and teens that are challenged.

Banned Books Week is a project of the American Library Association’s (ALA) Office for Intellectual Freedom. According to Browne, it began as an annual observation in the early 1980s, with the first display going up in 1982.

“What was going on in that time was that there was a new and unusual wave of organized book challenges in the United States,” Browne said.

Browne said these challenges went beyond individuals in a community raising concern about a book that their own children were reading and having private conversations with teachers and librarians.

“This was kind of a wave of national organizations or state-wide organizations saying [in] communities all around the country or the state, ‘Here’s a list of books. Let’s try to get them out of as many schools as possible or as many libraries as possible,’” Browne said.

Since the 1980s, the ALA and other organizations concerned with free expression have worked to raise awareness about challenged and censored literature. The ALA Office for Intellectual Freedom annually compiles and releases a list of that year’s top 10 banned books, based on reports from the media, school and library staff.

This year’s list includes not ten, but 11 items, selected from the 483 books that were challenged and banned — and some even burned — in 2018. The reasons for the controversy surrounding each book range from LGBTQ content, political and religious viewpoints, profanity, sexuality, cultural stereotypes and more.

Number nine on the list, “The Absolutely True Diary of a Part-Time Indian” by Sherman Alexie, was deemed controversial for “sexual references, profanity, violence, gambling, and underage drinking, and for its religious viewpoint,” as stated on bannedbooksweek.org. The book was pulled from shelves in Waterloo’s own middle school classrooms in 2015, according to an article published in The Courier in April that year.

Although there are currently no challenged books on UNI’s campus, Browne encouraged students to continually educate themselves on the issue.

“It is one of those things that is just kind of this lofty intellectual idea until the day it comes through,” she said.

Browne emphasized the point that not all book challenges are publicized in mainstream media; many incidents are quiet affairs.

“A lot of local challenges are just people who have different opinions about what should be priorities in our schools and libraries, what kids should learn at home versus at school, things like that,” she said. “I hope students […] know that most book challenges can be resolved just by having conversations with people and assuming everyone is invested in the same well-being of the same school or community population.”

In addition to familiarizing themselves with the books on the ALA’s list, Browne also encouraged those entering the education field to learn about the policies surrounding book challenges and their rights and obligations, both as teachers and librarians and as parents and guardians.

The most important action students can take, Browne said, is to “read widely.”

Those who wish to learn more about the issue of banned books are welcome to contact Browne, visit the display in the IRTS Lab or visit the ALA Office of Intellectual Freedom’s website at www.ala.org/advocacy/bbooks.