Students compete for the crown 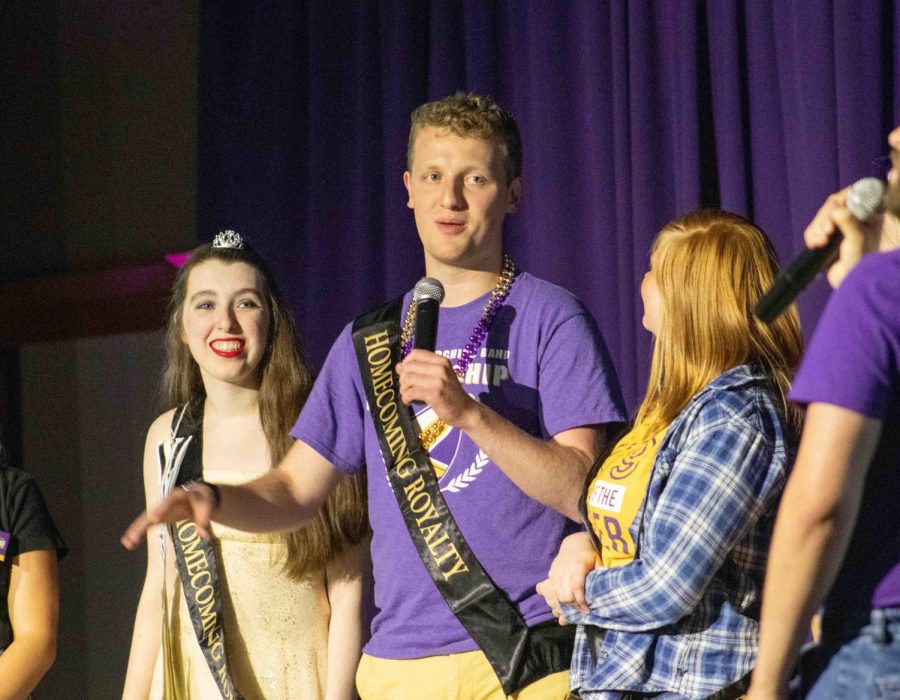 Eight candidates competed for the crown at the annual Homecoming Royalty Competition on the evening Thursday, Sept. 27 in the Maucker Union Ballroom.

The competition was hosted by the Campus Activities Board (CAB) and emceed by senior social work and Spanish major Ryan Frank and senior psychology major Mahlia Brown.

The evening started out with a hardball question: “Is water wet?” Each candidate had to defend their stance. The competition seemed split on the controversy.

“Water is wet because water is the essence of wet,” said Erika Wold, a senior psychology major. “And if you take out the ‘A’ and the ‘R’ and mix around the ‘T’ and ‘E,’ it says ‘wet.’”

“Water itself can not be wet, but if I go into water and leave the water I will be wet, because the water is on me,” he argued. “Water can not be on itself, and therefore is not wet.”

The heated debate was followed by the talent competition, which showcased the wide range of the each Panther’s skills. The evening began with a stand-up comedy act, which then led to a tarot card reading, screenprinting, singing a cover of “Nations of the World” from “The Animaniacs” circa 1991.

One candidate, history graduate student Hannah Ackerman, chose to embody the first UNI homecoming queen, Evelyn Arquette, from 1923. She acted out a script with several facts about UNI homecoming history and danced a historical waltz from the time period.

Between the talent acts, students competed in a game of “Andy’s Coming.” At the sound of that phrase, candidates slammed to the ground as if toys from the “Toy Story” franchise. It was a close race, but the winner of the game was senior art education major Sydnee Chiri.

During the last portion of the competition, candidates answered one final question: “What is your favorite UNI homecoming tradition?” Answers varied from the homecoming parade to the homecoming kick-off.

Senior choral music education major Liz Fontenot answered, “Kickoff and Pride Cry — it just gets everyone in the homecoming spirit and is a lot of fun.”

CAB member Ava Shafer, a sophomore sports public relations major, said that homecoming is “a time to get together and [about] having a good time.”

The results of the competition will be released during the Homecoming Kickoff on Monday, Sept. 30 at 5 p.m. in Lawther Field.