Jepson Forum on immigration and tariffs 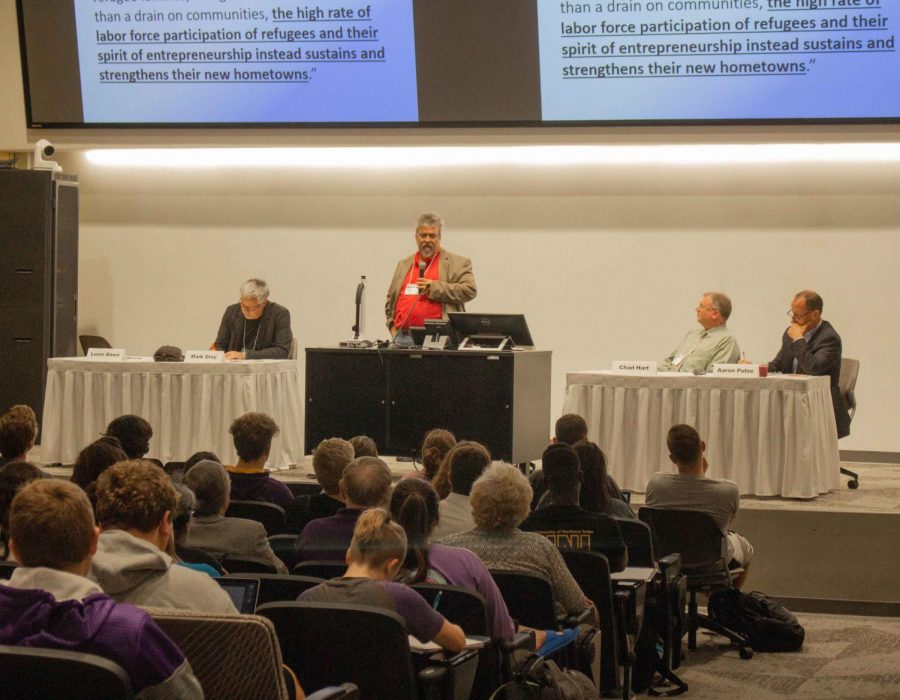 On Wednesday, Sept. 26, 2019, the annual Jepson Forum took place inside Schindler Education Center. The Jepson Forum honors Lawrence Jepson, an immigrant from Denmark who arrived in the Cedar Valley in the early 1900s and became a successful Wall Street businessman and outspoken advocate for the impact of global economics. After Jepson’s death, an endowment was established in his honor to create professorship and scholarship in global economics. The current forum is organized by the Lawrence Jepson professor, Professor Shahina Amin, and the Department of Economics at UNI.

The first speaker was Bawn, of the Iowa Department of Human Services (DHS) Bureau of Refugee Services. Bawn focused on the refugee and immigration impact in Iowa and the United States. The financial impact of refugees in the United States is extreme, said Bawn, quoting a New Economy study stating that refugees “earn $77 billion in household income, and $21 billion in taxes.”

Since the beginning of the Iowa DHS, said Bawn, Iowa has been a “Work First” state, meaning refugees coming to Iowa need to be self-sustaining quickly following their arrival and most begin work 30-90 days after arrival. Bawn described Iowa as a “magnet” for refugees thanks to its high job demand, positive family life and welcoming nature.

However, this may all soon change. Each year the amount of refugees allowed to enter the country is determined by the president. Since the last year of the Obama Administration, this number has been at a steady decline. The presidential determination for the 2020 fiscal year has not yet been determined, but Bawn fears for the worst: zero.

The second speaker, Grey, a UNI professor and Director of the Iowa Center for Immigrant Leadership and Integration, focused on two factors: political disconnect and mass migration. Grey argued that a major focus on immigration and refugee issues is based on the current “anti-immigrant” political sphere.

“Two-thirds of our state’s population growth for roughly the past 20-25 years has been due to immigration and the arrival of refugees,” he said.

Grey stated that many companies are in desperate need of labor, yet in public are silent about their needs in fear of backlash.

“You cannot have it both ways,” he said. “You cannot remain silent about these anti-immigrant and refugee settlements and turn around and beg for more of them to come along.”

“Forced migration around the world is [at its] highest in human history,” he said. “Roughly 71 million people are being forcibly misplaced today. 26 million are refugees, 41 million in their own countries, 3.5 to 4 million asylum seekers.”

He blamed this mostly on climate change and food insecurity, a problem he thinks will become increasingly important in upcoming years.

“What do we need to try to do now here in the relatively short-term, to mitigate or try to get a handle on what the potential is of the mass migration of human beings?” he asked.

“I think it’s upsetting that companies hide in the public about wanting employees but will only speak in private about their needs, because they’re refugees. Public opinion needs to change because we need them here,” said Kersten Kahley, a sophomore English major.

The third speaker was Hart, an economics professor from Iowa State University. Hart focused on tariffs themselves, defining them as “a tax on imports’’ used to “reduce trade” or “protect domestic industry.”

Hart claimed that “the biggest thing happening with agriculture is the tariff dispute with China.”

“For the first time in 40 years, the U.S. is at a trade deficit for agriculture,” he said. “[This] is a direct result of the China trade dispute.”

He hopes that the U.S. will strengthen its relationship with other agreement holders, such as Mexico and Canada, for the time being. According to Hart, the damage is “irrevocable,” and the end is not near.

“It takes decades to create these kind of agreements,” he said. “We are in year two.”

Putze, the final speaker, is a UNI alumnus and Director of Communications and External Relations from the Iowa Soybean Association. Putze also focused on the impact of the current trade war with China, specifically its impact on the soybean industry.

The U.S. is currently the lead producer of soybeans and China is the lead consumer. On average, Putze said, 4 billion bushels of soybeans are exported annually, and 14-16% of those beans are from Iowa. Prior to the trade war, Iowa had been working with China for over 30 years. However, China is now looking for soybean producers in other countries, such as Brazil and Argentina.

Putze mentioned the current rainforest fires in Brazil due to the burning of forest to make room for farming. Several companies are pulling out of Brazil due to this issue.

However, even with the backlash of Brazil’s production, the U.S. and China conflict is still at a stand-off, with “no end in sight,” according to Putze. He also claimed that the situation is “lose-lose” because both sides are losing money and resources.

Taylor Shipley, a junior finance economics major, said, “It’s interesting we don’t know when anything is going to be solved […] We’re just trying to make our losses as less as possible.”