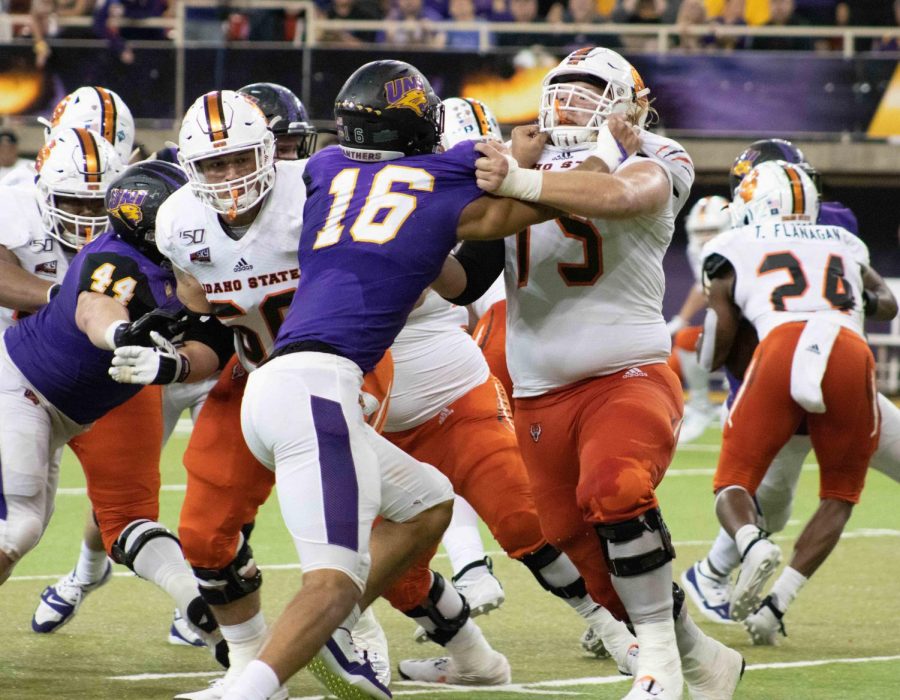 Junior defensive end Elerson Smith is becoming a force to be reckoned with after tying his 2018 sack total of 7.5 sacks through the first five games this season.

The Minneapolis native earned his second Missouri Valley Football Conference Player of the Week award after racking up 2.5 sacks and three tackles for loss in a 21-14 win against Youngstown State last week.  Smith was first awarded the honor after a three-sack performance against Idaho State. The 6-foot-7, 245-pound defensive end now leads the FCS in sacks, but his humble nature and work ethic that got him to this point shined through.

“There’s always something that you can work on,” Smith said.  “Like today, I was getting very frustrated with myself just trying to figure out my run fits.  Just never being satisfied.”

Bryce Paup, defensive line coach and 1995 NFL Defensive Player of the Year, also preaches always striving to get better in a piece of advice given to Smith.

“Just recently, when I won the Missouri Valley Player of the Week [award], he was like, ‘Alright, now that things are going your way, remember what got you there,’” Smith said.  “‘That’s hard work, that’s focusing on the little things and doing things the right way.’”

Smith feels that the biggest difference from last season to now is the increased opportunity that he’s getting along with building strength in the offseason.

“I feel a lot stronger than last season as well,” Smith said.  “Thats a huge factor, and I just feel a lot more comfortable with the play calls.”

Head coach Mark Farley has been impressed with what he’s seen from Smith this season.

“Elerson is a very good football player,” Farley said.  “He’s kind of grown into that body. I mean he’s always been a big man, but he’s really expanded his game and the more physical strength he gets the better pass rusher and defensive linemen he is for us.  In previous years, he was probably just a pass rusher, but now he’s become a whole defensive end for us.”

Farley also speaks to Smith’s work in the weight room and what makes him a unique among the other players.

“When you put him in the weight room, you know, he doesn’t look like a guy that’s  going to go in there and outlift [Jared] Brinkman, but there are some lifts that he is that strong because he just has the leverage,” Farley said. “He just knows how to put it all together […] his coordination and timing of leveraging people is really what makes him a different kind of player.”

The former Minneapolis South High School all-state player grew up a Vikings fan, and learns from Minnesota’s defensive linemen, as well as those from NFC North rivals.

Smith also appreciates being able to play the game that he loves.

“To be able to make plays like that with my teammates; I wouldn’t trade anything in the world for it,” Smith said.