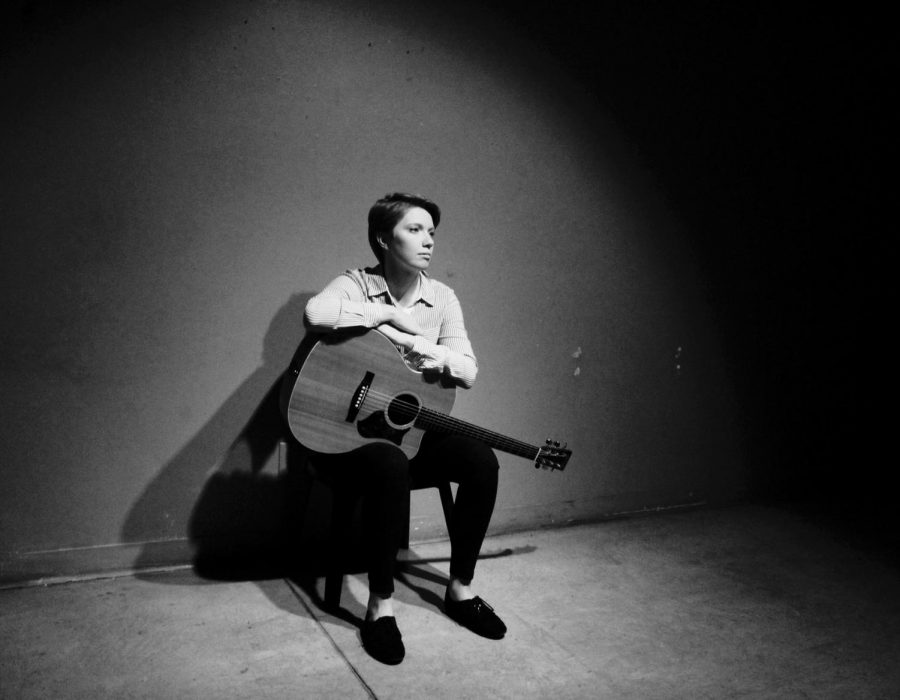 The album features 10 tracks written by Bearinger. She described “Spirals” as a “folk-rock-jazz album,” but said it could not be labeled by one particular genre, incorporating elements of different genres all throughout.

Overall, it took about a year-and-a-half to write and produce the record — although Bearinger didn’t do it alone.

While her first release in 2017 (an EP titled “We Were Well”) was produced solely by Bearinger, the singer-songwriter collaborated with several people to make “Spirals” a reality.

“With this project I said, ‘I want to make it as big and cool as I can, and in order to do that I need other people to play more instruments and help me with the recording process and the mixing and the mastering and all that stuff,’” said Bearinger, who graduated last December with a degree in instrumental music education.

The artist’s primary collaborator was Patrick Cunningham, who earned his music theory and composition degree from UNI. Cunningham acted as “a sort of producer” for the album, recording other musicians in his apartment studio and adding these elements to the Bearinger’s vocal and guitar parts.

Bearinger recorded her end of the project in a studio in Minneapolis, where she now resides. Once all recording was complete, Cunningham drove up to Minneapolis where he and Bearinger worked with recording engineer Mason Meyers, another UNI School of Music alum, to mix the tracks.

Bearinger emphasized the fact that every instrument heard on the album was played either by a current or past UNI student. Musicians included Clayton Ryan on bass and guitar, Kevin Boehnke on guitar and trumpet, Rishi Kolusu on trumpet and vocals, Chris Hansen on slide guitar, David Meyers on guitar, Abram Miller on tenor saxophone, Abigail Moore on violin and viola, Kelsey Chidley on cello, Jason Adriano on trombone and Andrey Floryanovich on clarinet.

“I kind of see it as a time capsule preserving the way that we all sounded at this point in our lives,” Bearinger said.

While the album was produced largely through collaboration, each song’s melody, chords and lyrics were purely by Bearinger. The title “Spirals” alludes to the “thought spirals” the songwriter has had over the years.

“Because my personality — I get kind of fixated on things, and I tend to just think about the same things over and over and over again,” she said. “So that’s kind of where that theme comes from. And I think it weaves its way throughout all the songs in a lot of different ways.”

Some of Bearinger’s favorite tracks include “Live with Love,” “Forgive Yourself” and “Mrs. T,” written to celebrate the life of her aging grandmother. Although Alzheimer’s has deteriorated  her grandmother’s ability to retain memories, Bearinger said that music has endured.

“What was really beautiful is that when we get to see her — my family’s all musical — we sing songs with her,” she said. “She still remembers a bunch of songs that she’s learned throughout her life.”

One lyric in “Mrs. T” says, “And when it’s springtime in the Rockies, you can bet that she’ll be there,” a reference to one of her grandmother’s favorite songs from the 1920s.

“So I kind of wanted to celebrate just all the good things about her and have a positive memory of her that isn’t quite so much just how she is at this point in her life,” Bearinger said.

The last song on the album, titled “Brazil,” is another one of Bearinger’s favorites, referring to a trip she took with the Northern Iowa Symphony Orchestra in 2018.

“All of the lyrics were taken from the travel journal while we were there, and part of the melody was taken from what I heard a street musician playing while we were walking around in downtown Panamá City,” she said.

Although she grew up in a musical family, Bearinger did not immediately know she wanted to pursue music. At first, she wanted to be a writer, then a doctor; then she decided to go to school for music teaching. It wasn’t until college that she began writing songs of her own.

“It was just such a cathartic and gratifying process, and also very scary to be vulnerable like that,” she said. “But the reception to the first few songs that I wrote was just so positive, and I was like, ‘Wow, I love doing this, and I don’t think I want to stop any time soon.”

On top of working on her music, since graduating, Bearinger has been working as an associate digital producer for “Performance Today” at Minnesota Public Radio, where she manages their social media presence. She also teaches private piano, guitar and trumpet lessons and does substitute teaching on occasion.

“I’m constantly busy; there’s never enough time in the day for everything,” she said. “But I like to be busy.”

After a rest from the lengthy and involved process of producing “Spirals,” including a two-week Kickstarter campaign, Bearinger said she will definitely start writing again in the near future. In the meantime, she plans to continue playing more shows and meeting people in the Minneapolis music scene.

“Spirals” is available on most online music streaming platforms. Physical copies can be ordered at rachelbearinger.bandcamp.com/album/spirals.