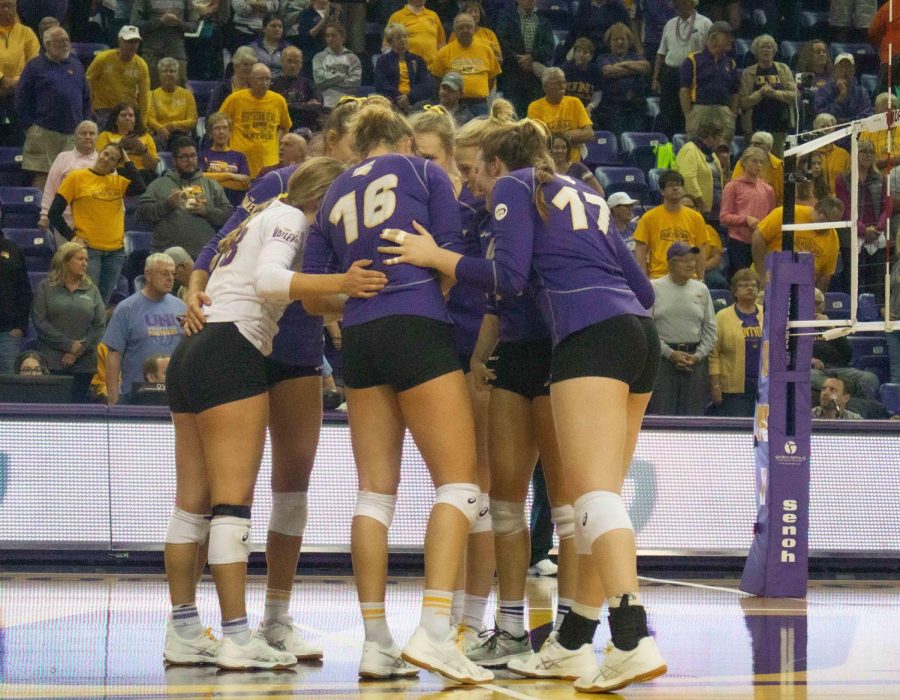 The Panther volleyball team sits at 6-1 in Missouri Valley Conference play and 12-9 overall after a split weekend at home, defeating Bradley 3-1, and losing to Illinois State 3-2.

“Being able to take care of our business at home and then stealing some road wins is extremely important in this race and we let one slip away tonight [Saturday against Illinois State],” head coach Bobbi Petersen said.

One of the leaders of the team, senior Karlie Taylor, echoed Petersen’s statement.

“I think we’ll all go home and reflect on stuff each individual can do better for the team, and then I think we’re going to take it into practice,” Taylor said.

The win of the weekend came on Friday when the Panthers took down Bradley with set scores of 25-18, 22-15 and 25-18. UNI out hit the Braves 60 to 46, and put up nine blocks to Bradley’s six. Petersen called conference play, “a crazy conference race so far.”

Taylor led the Panthers in kills and digs with 14 and 19, respectively. Taylor’s first hit of the match moved her to fifth all-time in career kills with 1,440. Abbi Staack followed close behind with 17 digs during the match, and Rachel Koop had 47 assists for her ninth 40+ assist performance of the season.

Saturday night saw a close match between the Panthers and Illinois State with the Redbirds taking the win 3-2.

Reflecting on their first conference loss this season, Coach Petersen said, “The biggest part is being able to understand the things that were in our control and the things that aren’t, because unfortunately, volleyball is a game of mistakes.”

Kaylissa Arndorfer and Taylor led the Panther attack. Arndorfer finished the match as the most efficient hitter for the Panthers with a .395 hitting percentage and 18 kills. Taylor also continued her strong play with 23 kills and three blocks. Koop recorded another 40+ assist performance with 53 assists and Staack added 31 assists as well.

Up next, the Panthers will host the Drake Bulldogs for another MVC match in the McLeod Center on Oct. 18.