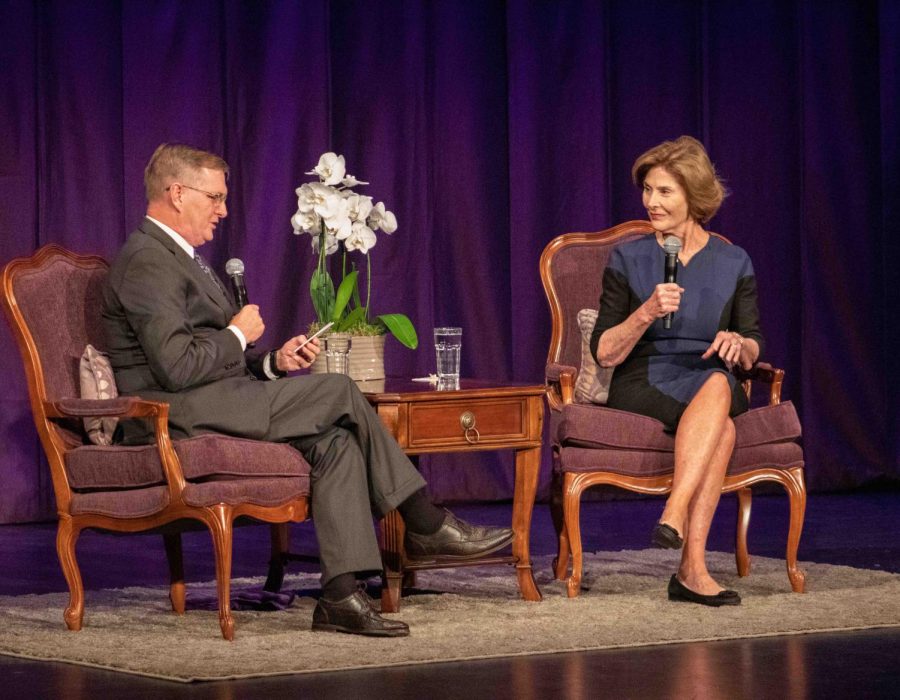 “[She] spent her life and her career in service to others and to the state that she loved,” Nook said.

Corning established the Distinguished Lecture Series in 2001 to “provide our students and community an opportunity to hear from distinguished leaders with a variety of backgrounds, ideas and experiences,” according to Nook. Previous guests have included astronaut Sally Ride and the Dalai Lama. Wednesday’s lecture was the first in the series following Corning’s death in May of 2017.

“As a former teacher and school librarian, Mrs. Bush’s work in education and literacy fits well with the University of Northern Iowa’s proud history of being the largest teacher education program in the state of Iowa,” Nook said.

The crowd greeted Bush’s entrance with a standing ovation.

Bush began her speech with an update on her family, addressing the May 2019 passing of her mother, Jenna Welch, as well as the deaths last year of her in-laws, President George H.W. Bush and former First Lady Barbara Bush.

During both her 25-minute speech and the ensuing Q&A session, Bush discussed the impact of these parental figures in her life. She credited her mother with fostering her own love of literature and nature.

“I had a mother who read to me all the time, which I’m sure is the reason I love to read and that I became a librarian,” she said. She cited “Little House on the Prairie” and “Little Women” as books that she and her mother shared and that shaped her own outlook on the world through their depictions of stable, secure American families.

Her mother was also an avid outdoorswoman and birdwatcher who served as Bush’s Girl Scout troop leader, kindling Bush’s devotion to the preservation of national parks.

Bush described mother-in-law Barbara as a role model both as First Lady and in her personal life, saying that Barbara encouraged her “to enjoy what you have now to the fullest.”

“From our parents, we’ve learned that all that we have is now,” she said.

“[We’re] living what I call ‘the afterlife’ in the state George calls ‘the Promised Land,’” she said, to audience laughter.

She highlighted the couple’s work at the Bush Presidential Center in Dallas, which seeks to further the public policy work begun during President George W. Bush’s time in office. She noted, however, that her legacy is not always so grandiose.

“It’s come to this,” Bush quipped, displaying a Laura Bush bobble-head doll given to her by a friend who found it “on the clearance shelf” of the Constitutional Center in Philadelphia a few weeks after President Obama’s inauguration.

Although she chuckled along with the crowd, Bush said that life in the White House did occasionally make her feel like “a bobble-head inside a bubble,” and she struggled to find her identity during her husband’s presidency.

“Everyone seemed eager just to assign me the personality of a previous First Lady,” she said.

One of the causes which shaped her eventual identity and personality as First Lady was literacy.

“I believe that every child deserves a quality education and a safe and happy childhood,” she said, to a round of applause from the audience. “I know that books have the power not just to move people as individuals, but to shape our nation. I know that if every child is educated, our country and our world will be more stable and prosperous.”

Bush drew from her experience as a teacher in Houston, offering an anecdote of a boy who she had to leave behind upon arriving to pick him up for a field trip when he came to the door in his underwear. His mother, though audibly present in the house, never came to the door to grant him permission to go.

“Helping children like this little boy is one of the greatest challenges of our time,” she said, noting that she often wonders what became of this former student.

She cited drugs, gangs, Internet predators and the rise of single-parent homes as problems faced by modern children, and concluded her speech by challenging the audience to seek out and help those struggling with these issues.

“Never forget that boy,” she said. “Never forget that one friendly smile, one reading lesson, one consoling touch, one check written or one busy hour given over to someone who needs you […] these are the things that can make all the difference.”

After another standing ovation, Nook joined Bush onstage for a 20-minute Q&A session. The former First Lady answered questions regarding her work as an educator, White House life and her three grandchildren. Nook’s questions also allowed Bush to address other issues which she promoted as First Lady, including women’s rights.

Bush mentioned her belief that the 9/11 terrorist attacks generated a wave of American support for women’s rights in Afghanistan.

“When the spotlight turned on Afghanistan and we saw a country where half of the population was left out […] many American women […] wanted to help Afghan women,” she said.

She described her work in creating educational and career opportunities for Afghan women legally confined to the home, and addressed her continued communication with Afghanistan First Lady Rula Saade Ghani.

“The Ghanis [hope] that we keep a military presence there, because they need the space and security that our military can give them to build a society,” she said.

Attendees from the education field appreciated Bush’s message. Adel Kessler of Cedar Falls, a UNI alumna and former special education teacher, said she connected to Bush’s story about the boy from the field trip.

“I really related to those kids like the boy she had to leave behind, because as teachers we all have those students that we wonder about—how are they doing now?” Kessler said. “Some of them you have contact with, but some of them you just don’t know.”

Senior elementary education major Alex Mens attended the lecture for a class, but said she was “genuinely interested” to hear Bush address literacy education. However, she said the lecture wasn’t what she’d expected.

However, she called it “really sweet” to hear Bush speak about her family and grandchildren.

“It honestly went above and beyond my expectations,” Bergmann said. “I liked the humor she put in it and just being a powerful female figure to look up to.”

“It’s interesting to expose yourself to different people who have made great accomplishments. It just helps open up your world,” Kessler said. “It’s all about making the world a better place, and we all have a responsibility. I appreciate that [Mrs. Bush] has taken that seriously and continued to contribute.

“Teaching truly is a work of heart,” Kessler concluded, “and I think that came through in her message.”