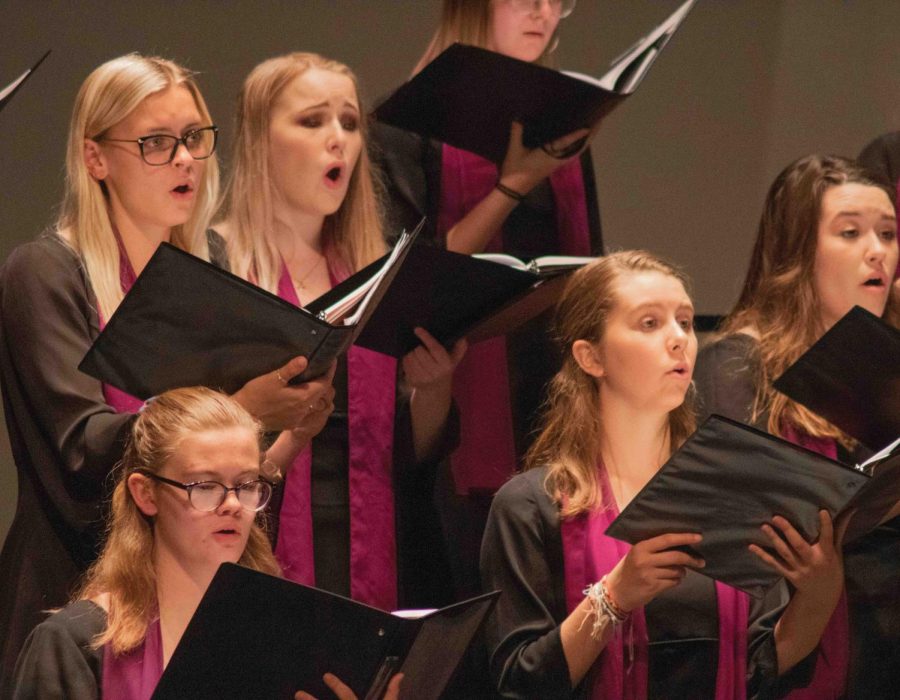 During the first half of the concert, the Women’s Chorus sang selections from Francisco Núñez, Elaine Hagenberg and Jim Papoulis.

Papoulis’ “Panta Rhei” — a Greek phrase translating to “in flux” — was prepared for the group’s upcoming third international tour to Greece in May, according to choir director Amy Kotsonis. The song was accompanied by three students providing percussion with large bamboo sticks.

After a brief intermission, Glee Club members jogged onstage as they sang the UNI Fight Song.

One of the Glee Club’s selections — Pablo Casals’ “O vos omnes” — was performed in celebration of Hispanic Heritage Month, as was the Women’s Chorus’ rendition of Núñez’s “Misa Pequeña.”

A crowd favorite of the evening was the Glee Club’s version of popular tune “Creep” by Radiohead. This was preceded by “Thou Didst Delight My Eyes,” with lyrics from a poem by Robert Bridges set by English composer Gerald Finzi.

“One of the great things about programming a concert is being able to show the relationships between seemingly disparate pieces of music or different times or different languages,” said Glee Club Director John Wiles. “And we think these two pieces of music do that. The Robert Bridges poem starts with ‘Thou didst delight my eyes: yet who am I? nor first nor last nor best’ and so forth. And those of you who know ‘Creep’ know that there’s a similar sentiment.”

After the choir concluded “Creep” with the final line of “I don’t belong here,” Wiles took the opportunity to invite people to join both choirs.

Upcoming events from the two choirs include the Women’s Chorus Holiday Concert on Tuesday, Dec. 3 at 7 p.m. at First Congregational Church in Waterloo and the Glee Club Christmas Variety Show on Friday, Dec. 6 and Saturday, Dec. 7 in GBPAC’s Great Hall.