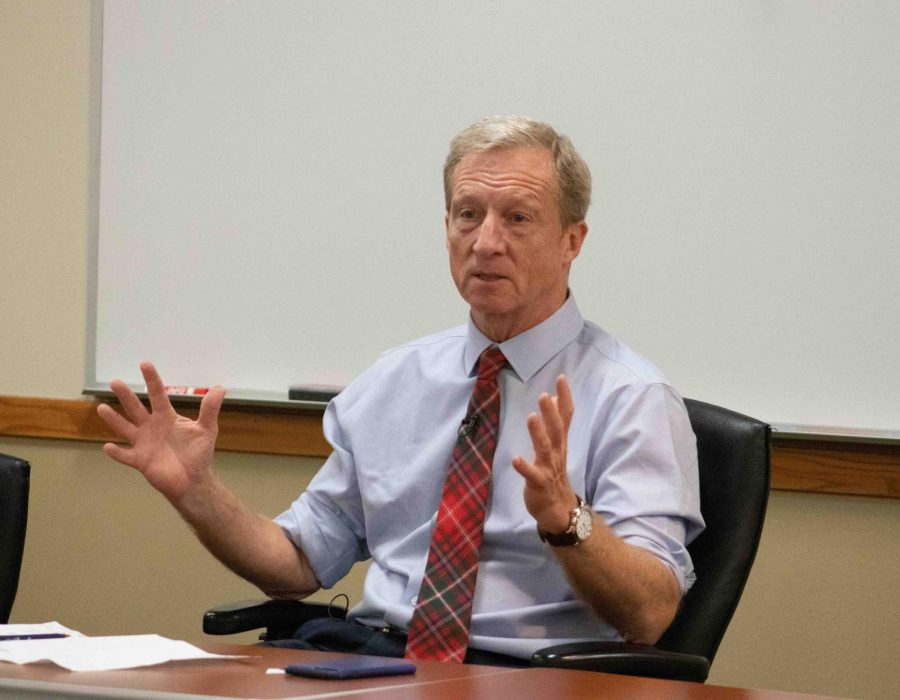 “As Iowans, we have the unique opportunity to meet many political candidates, which is super exciting,” Habinck said.

Steyer began by asking each attendee to introduce themselves and share the issues most important to them. Responses included health care, climate change, immigration, gun control and higher education. As they spoke, Steyer took notes and then addressed the crowd.

Next, Steyer gave a brief summary of why he entered the 2020 presidential race.

Steyer argued that the reason for this governmental ineffectiveness is the influence of big businesses in politics, a phenomenon he termed the “corporate stranglehold.”

“My thesis is if we break the corporate stranglehold, we get everything,” he said. “Americans are going to have to decide to take back our own government. No one’s going to give it to us because it’s working perfectly for the corporations.”

Steyer cited health care as an example, stating that Americans pay twice what other countries pay for comparable health care.

Steyer emphasized his own record, citing his anti-corporation efforts in his native state of California.

“I have spent the last ten years leading coalitions fighting corporations,” he said, describing his successes in imposing taxes on oil and tobacco companies and closing corporation tax loopholes.

Steyer also discussed the Need to Impeach movement, which he founded in 2017 and calls for the impeachment of President Trump.

“It has infuriated political scientists, the idea that the American people could actually make up our own minds,” he said. “I believe in democracy, and I believe in the wisdom of the American people. […] If there is something wrong in your country […], make sure you oppose it early, and oppose it all the time. This isn’t a question of partisanship; this is a question of what do we do for the country.”

Steyer then opened the floor for questions. Justin Scott, Iowa State Director for the American Atheists, asked Steyer to comment on the influence of religion in political discourse.

“You can use your religion to inform your values, but you can’t ask anyone else to follow your religion,” Steyer said. “That’s the problem with mixing church and state, is people become so wedded to their belief that they think that if they change their belief, they’ll be rejecting God.”

Scott asked how Steyer would build coalitions with leaders such as these.

“You will never hear me say a disrespectful thing about Republican voters, because I don’t feel any disrespect,” Steyer said. “I view them as responding to […] real, sensible, human needs. Republican voters felt disrespected, overlooked and as if the government wasn’t treating them fairly. Well, that’s not wholly unrealistic.

“There’s a reason people think the government doesn’t care about them,” he added, discussing the need for a living wage. “They’re right, and the numbers show it.”

Communications major and self-identified Republican Kayla Cook attended the event in an effort to be “really open to listening to other perspectives.”

“I think that’s really important because our country is so divided right now,” she said. “I just want to see the country united again.”

Cook had arrived late due to a test in one of her classes, and said she appreciated the “grace” Steyer showed, despite her tardiness.

“The event wasn’t a speech; it was a conversation,” she said. “Tom mentioned my name when he talked about unity. When I came up afterwards for a picture, he was very intentional, and he wanted me to know that I was welcome.”