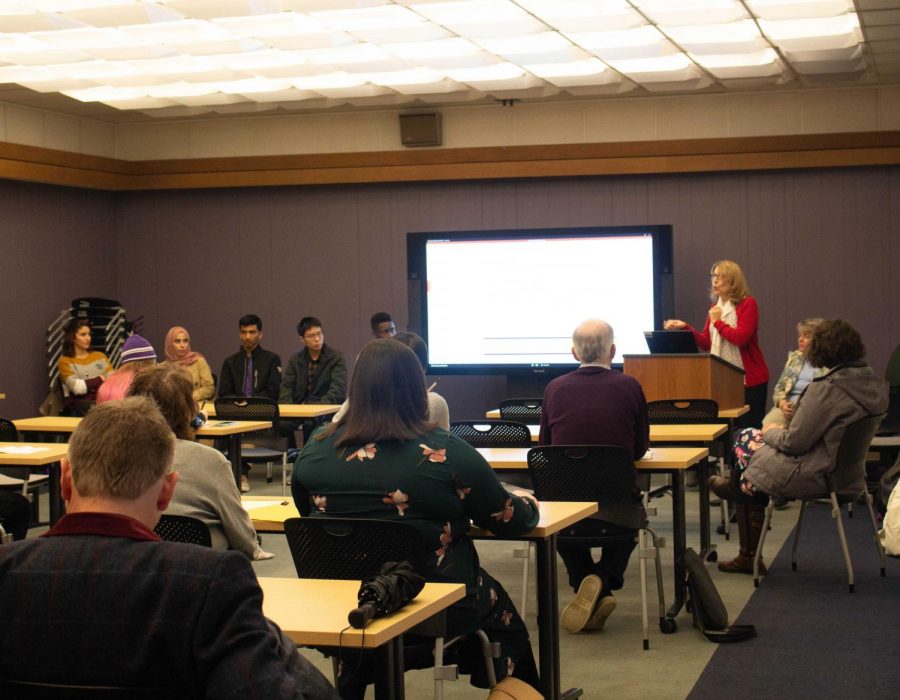 Varela started off the presentation by addressing some communication differences international students may face. While not holding eye contact may seem rude to us, it is a sign of respect in other countries. Furthermore, class participation is vital in most U.S. classrooms, but in other cultures, asking questions in class is frowned upon as many of the students are afraid of being wrong.  Other differences international students sometimes encounter are popular culture references, acronyms, anecdotes, jokes and phrases.

Another problem many international students face is plagiarism. The students don’t commit these acts with ill intent, but instead are used to another way of learning. While sharing information with one’s classmates could be considered cheating in the United States, in other countries it may be seen as simply helping them out. In addition, while not citing direct sources in papers is considered plagiarism here, the uncited information may be viewed as “common knowledge,” not requiring citations in foreign countries.

Varela asked her panel of teachers what challenges they’ve encountered with international students and how they addressed them.

“The biggest challenge I’ve had in my classroom is plagiarism. One student copied a lab report off the Internet, and another turned in the same report from last semester,” said Coon. “To fix the problem, I explained the consequences of their actions and said how they would fail the class. It helps to have very clear communication, and sometimes start from scratch.”

The international students also weighed in on challenges they faced. Yasin, a finance major and native of Saudi Arabia, shared some of the struggles she faced during her years at UNI.

“Citations are a very big thing here, [but] we never did them back home,” she said. “I also felt people were very hesitant to talk to me unless I made the first move.”

Laouar, a women’s and gender studies major, had a similar experience.

“Classmates were a problem for me as well. I felt that my classmates were in their own bubbles and weren’t very open to me,” Laouar said.

Even though there are many difficulties faced by international students, those at the presentation expressed gratitude at how hard their professors tried to make the transition as easy as possible. In addition, professors shared tips that they found helped their students the most.

Riedle said she limited misinterpretation of directions by keeping her sentences short, very clear and very stated. Fenech said that he began to bring in more Arabic literature, as many of his international students are from Saudi Arabia.

At the end of the presentation, the audience broke into small groups and discussed how best to handle situations involving international students.