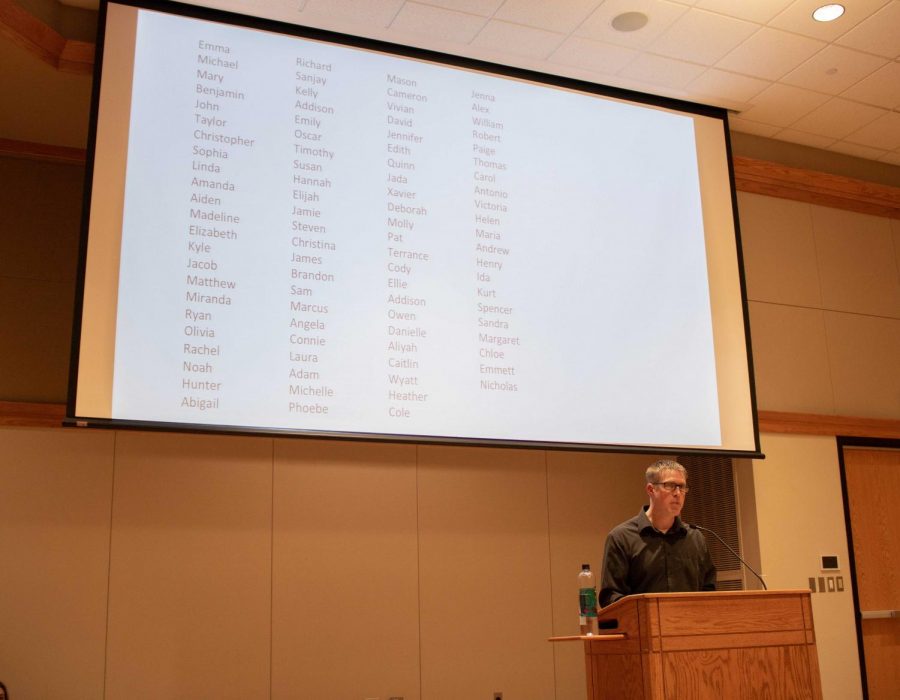 Over the course of Ross Trowbridge’s hour-and-a-half long presentation on mental health, an average of 90 people lost their lives to suicide. In total, nearly one million people die by suicide worldwide each year. Included within that number are individuals diagnosed with Borderline Personality Disorder (BPD), which has a suicide rate of 10 to 15 percent.

During his presentation on Tuesday, Oct. 29 in the Maucker Union ballrooms, Trowbridge hoped to encourage discussion about mental illness.

“I’m not a motivational speaker or a comedian,” he said. “I’m some dude with BPD. It’s good to have a discussion about mental health and issues. Everybody has been impacted by mental illness in some way in their life. I’m not unique. I’ve battled mental health issues for 25 years, and I’ve had two to three suicide attempts and suicide ideation.”

Trowbridge was diagnosed with BPD at the age of 35 after being misdiagnosed with OCD, general anxiety disorder, bipolar disorder and addiction. Symptoms of this disorder include behavior such as unstable personal relationships, harmful impulsivity, intense anger and suicidal behavior.

Although Trowbridge doesn’t believe he had a bad childhood, he mentioned that his parents were divorced. He showed early signs of potential mental illness such as being overly sensitive and analytical. In addition, he felt that he was very passive and paranoid. From a young age, he learned to shut off his emotions and escape through substances.

“I smoked my first cigarette when I was 12,” Trowbridge said. “I bought cigarettes from a vending machine and my friends and I would sneak off. I had my first drink at the age of 13. Baseball was my first drug, I was obsessed. I never felt like I had a purpose, so I really clung to that. I wasn’t scholarly, so I focused on sports and girls.”

Trowbridge hung out around jocks, but he was bullied to the point of crying after school. After being forced to try out for a play, he began to gain more confidence in himself through various acting roles. In 1997, he was pulled over for an OWI, and he was diagnosed with major depressive disorder at the age of 18. He’s currently 40, and the diagnosis that he was given at that time made him feel labeled and broken.

Between the ages of 20 and 35, Trowbridge felt that he was functional.

“I was able to handle BPD with the right support system,” he said. “I went from zero to six kids in three years, and I had two sets of twins within 22 months. I really clung to that identity, but it only lasted for four years and then I fled. My identity was career and work.”

In late 2014, Trowbridge left a senior management position that he had held for seven years. He moved from Dubuque, Illinois to Des Moines, Iowa, and married a woman two months after they had gotten together who also had BPD. He smoked methamphetamine for the first time and had an allergic reaction to it, and after that he hasn’t felt the same.

“My emotions are at that intense level at all times,” Trowbridge said. “I went from owning a home and having a family to being homeless in Des Moines in 2015 and sleeping down by the Raccoon River. Something switched inside me. In AA I learned to get out of myself, and I talked businesses into providing food to the homeless. They don’t have resources, so I started delivering to them.”

During this period in his life, Trowbridge began advocating for mental health awareness and discussion of BPD. He walked around a local sculpture park in the area, discussing the stigma behind mental health issues. In order to spread the impact that these conditions can have on someone, he started a movement called #ProjectIAmNotAshamed. Through this program, he hopes to share his story and help others to start a discussion. He described the recovery process as a formula where people have to examine the people and places in their lives while holding themselves accountable.

“I thought that it was an interesting and eye-opening experience to see how people go through their lives,” Zinkula said. “We can learn how to bring awareness to mental health.”

Other students, such as senior digital media production major Kazek Israni-Winger, were happy to see high attendance and engagement at the event.

“I really enjoyed it,” Israni-Winger said. “I was happy to see that a lot of people came to this. It allows people to learn about the stigma, and I thought that he had a good perspective.”

Tuesday’s event was sponsored by nonprofit organization To Write Love on Her Arms.