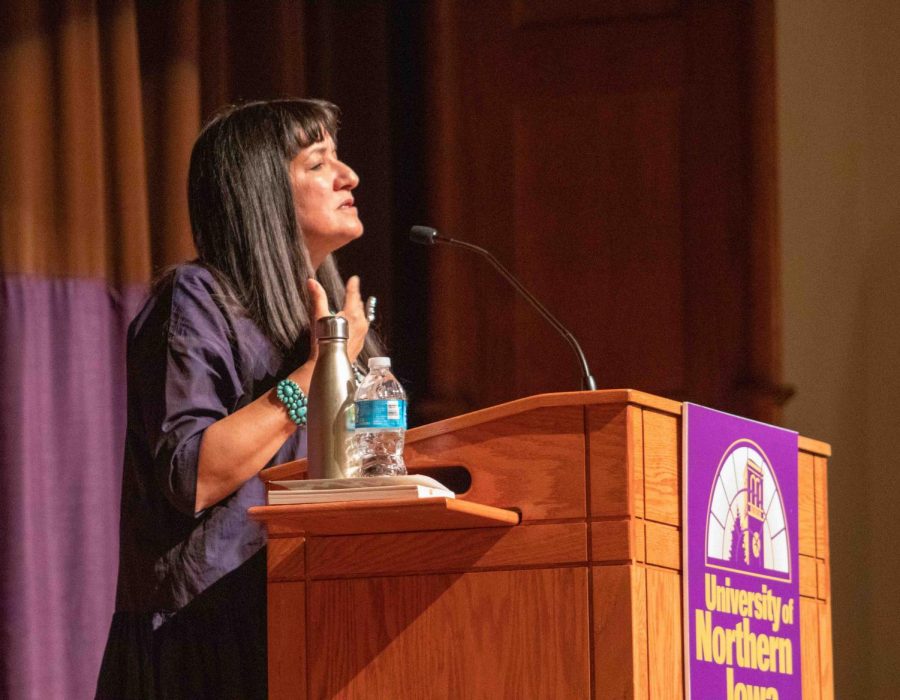 For author Sandra Cisneros, writing is a personal and restorative process.

“As artists, we have to break our hearts open in two every time we write,” she said, addressing the full Lang Hall Auditorium on Monday, Oct. 28 at 7 p.m.

Cisneros is the best-selling author of “The House on Mango Street,” “Woman Hollering Creek,” “Caramelo,” and many other short stories and poems depicting the Latina experience. She visited UNI as part of the Hearst Lecture Series, founded in 1988 by James S. Hearst in honor of his late wife, Meryl Norton Hearst. Cisneros is the first of five speakers in the 2019-2020 Hearst Lecture Series, hosted this year by the Department of Languages and Literatures.

Throughout the night, Cisneros emphasized the healing power of writing.

Cisneros opened the lecture by reading her short story “Eleven,” published in “Woman Hollering Creek” in 1991. The story describes a young girl’s humiliation when, on her eleventh birthday, she is forced to wear an ugly sweater which her teacher incorrectly believes to be hers.

Before reading “Eleven,” Cisneros addressed the young people in the audience, including two children who were ten and eleven years old. She said that, though many of her works are not written explicitly for children, they are books that children “approve of” and “insist on reading.”

After reading the story, Cisneros encouraged attendees to persevere in the face of rejection.

“As soon as I sent that story into the press in Boston hoping to get a nice big check, they sent it back and said, ‘This isn’t for kids!’” she said. “But you should never be defeated by rejection, because that story is my best-seller. It’s my big hit.”

Next, Cisneros read excerpts from her 2012 book “Have You Seen Marie?,” written in the wake of her mother’s death. In the story, the main character searches for a missing cat while coming to terms with her mother’s passing. Cisneros said that the process of writing the book helped her process and heal.

“When you lose your mom, it’s one of those losses that you never get over. You just learn how to live alongside it,” she said.

Reading from the afterword of “Have You Seen Marie?,” Cisneros said, “I knew as I was writing this story that it was helping to bring me back to myself. It is essential to create when the spirit is dying.”

Cisneros also mentioned Day of the Dead, or Día de los Muertos, the upcoming Mexican holiday celebrated from Oct. 31-Nov. 2 in which people create altars in honor of deceased family members. She advised attendees to create their own altars to celebrate the memories of loved ones.

The floor was then opened for questions from audience members. Cisneros answered questions regarding her creative process, advice for aspiring authors, mental health issues and inspiration for Latina students.

After the lecture’s conclusion at 8 p.m., Cisneros signed copies of her books (available for purchase at the event) and took pictures with attendees.

Alyssa Wiedemeir, a junior English education major with a creative writing minor, attended the lecture for a class.

“Hearing an author talk about her experiences in her writing was really cool,” she said.

Cisneros had told audience members, “Don’t say anything that you wouldn’t say in your pajamas, and that’s like your first draft. Then if you need to dress it up, you can.”

“I feel that’s going to be very helpful just to be more vulnerable in writing,” Wiedemeier said.

“[My professor] was telling me that it was a really big deal that we got her to come here,” she said.

Those interested in more information about Cisneros may visit her website (https://www.sandracisneros.com/), and look for one of her new poems, which will be published in the upcoming Fall 2019 edition of the UNI literary magazine North American Review.