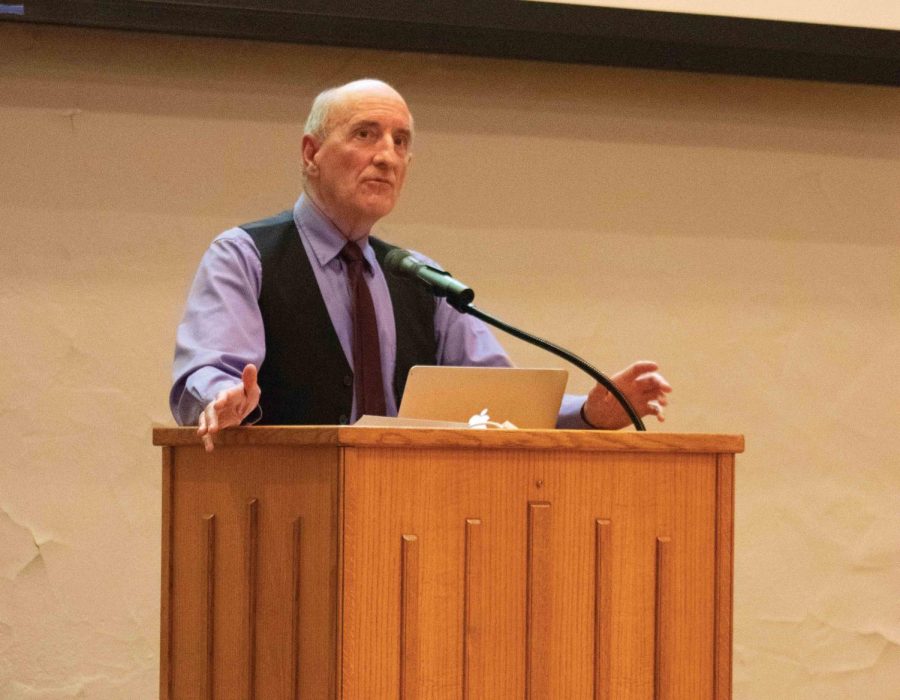 Author and translator Michael Ugarte delivered a lecture on Monday evening discussing his work translating African Spanish texts, as well as the use of language as the author's identity.

Approximately 50 UNI students, faculty and community members gathered in the Slife Ballroom in the UNI Commons at 7 p.m. on Monday, Nov. 4, for a talk given by translator and author Michael Ugarte.

Ugarte visited campus as part of the 2019-2020 Hearst Lecture Series, hosted by the Department of Languages and Literatures. Last week, author Sandra Cisneros visited UNI as part of the lecture series.

Ugarte, a native of New Hampshire who now resides in both Spain and the United States, is professor emeritus at the University of Missouri-Columbia. His talk focused on his research into the colonial and post-colonial relations between Spain and its African territories, including Morocco, West Sahara and Equatorial Guinea. Ugarte also discussed his experiences as a translator of Afro-Hispanic literature, especially the works of Guinean writers.

“Much of his work focuses on the in-between spaces of society,” Jerónimo said. “Throughout his work, Dr. Ugarte invites us to understand another site of crossing, sharing with us the importance of breaking borders.”

Ugarte began his hour-long lecture with a historical overview of the African countries he has studied. In many of its African colonies, including Morocco and Equatorial Guinea, Ugarte said, Spain simply “closed the curtain and went home” after the countries gained their independence. The lack of continued economic support from Spain has led to political unrest and, in the case of Equatorial Guinea, oppressive dictatorships in many of these former Spanish possessions.

One aspect of the Spanish culture which has persisted after Spain’s departure, however, is their language. Ugarte described African Spanish as “Spanish with African inflections infused with words from various languages.” He said many Afro-Hispanic write not in the indigenous language of their countries, but in Spanish, to disseminate their works to a wider audience.

“Spanish is used as the language of self-determination,” Ugarte said, speaking about the small African country of Western Sahara, one of the countries he has studied. “It is the language that the people […] use to make their plight known.”

Ugarte mentioned several Guinean writers who have also used Spanish as a means of sharing their identity and culture with the wider Hispanic community. Among them was Justo Bolekia, a poet whose work Ugarte has translated into English.

“[Bolekia is] making readers aware of where he’s coming from, his identity as […] someone who’s speaking in Spanish and who wants to make his culture known outside of his area,” Ugarte said.

This connected to one of the main themes of Ugarte’s talk — the importance of writing as a way for authors to share their identities with readers from other cultures, and his place within that process as the translator. Ugarte discussed his work translating the novel “Natives” by Guinean author Inongo Vi Makomé, which depicts the immigrant experience in Spain. The novel centers on two upper-class Spanish women and their interactions with an African man, and discusses the politics of racial and sexual power as well as the importance of understanding the cultural identities of others.

Ugarte said that the translator’s role in the storytelling process, as well as the level of contact with the author, depends on personal preference and the genre of the text that is being translated.

“Translation of poetry involves not only the imitation of certain cadences and, if you combine them, the rhythms and rhymes, but also the spirit of the poem,” he said, in reference to his work on the poetry of Justo Bolekia. “I was in constant contact with the author.”

Translation is also about more than just words, Ugarte said. He cited fellow translator Lawrence Schimel’s belief that translation should make the reader feel “duende,” a feeling of inspiration and emotional connectedness, in the text’s new language.

“I’m in favor of the person that says that translation should be seamless, and the reader should have the sense that they’re reading the original,” he said. He discussed the need to balance accuracy with fluidity and said that preserving the author’s artistry and style is one of the translator’s greatest challenges.

“Through Dr. Ugarte’s work of translating novels from Spanish into English, he is not simply shuffling words across a linguistic border from one language into another,” said Jerónimo in her introduction. “He is sharing stories about people, cultures and beliefs with an entirely new audience.”

One member of Ugarte’s audience on Monday, sophomore deciding major Jenn Culver, said the talk gave her a new viewpoint on both the work of translation and the Spanish culture.

“I think it was an interesting perspective on how translation is more about understanding the experience rather than a direct translation word for word,” she said. “[It was] a look into a specific area, Spanish-speaking Africa, that I had never really thought about or heard about.”