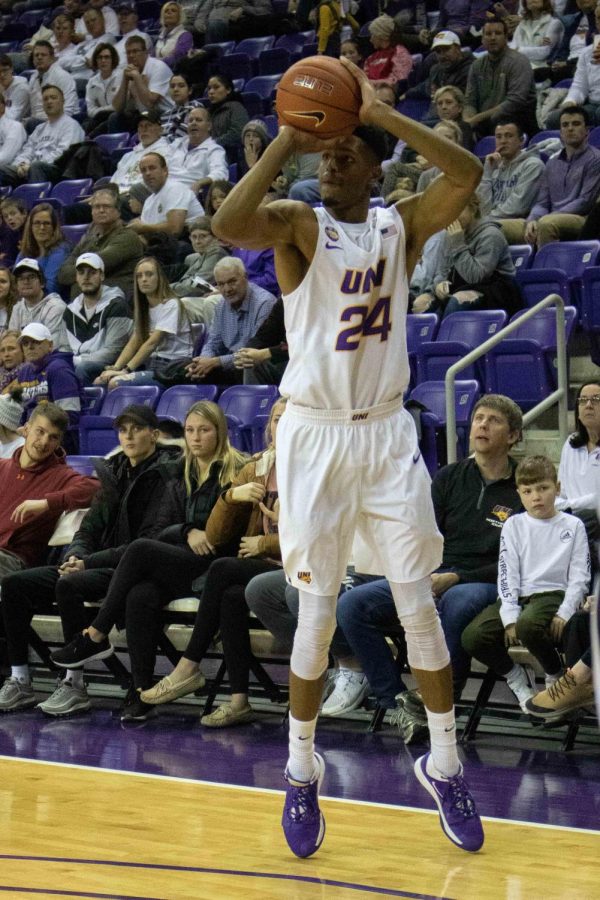 Coming off their season-opening victory, the UNI men’s basketball team took on the Northern Illinois Huskies for their first road test of the season in Dekalb, Ill. on Saturday.

Looking to spoil the Huskies’ season opener, the Panthers took care of business in the 3 p.m. matinee contest as they notched a 64-54 win.

“They got out and guarded us a little harder and denied our five men at the top which slows down the whole offense,” head coach Ben Jacobson said.

“We’ll work together on the practice floor so we’ll have a better look at things come Wednesday [vs. CSU Bakersfield at home].”

A dominant first half saw the Purple and Gold break out to a 16-point halftime lead. The second half saw UNI keep a steady lead throughout, holding off any potential comeback effort.

Senior forward Isaiah Brown led the way in scoring with 17 points, going 6-8 from the floor and 5-6 behind the arc. His effort on the boards as he grabbed seven rebounds also led the Panthers for the game.

Neither team was able to get much offensive flow going throughout the game. UNI shot 41 percent and Northern Illinois followed behind, shooting 35 percent. The Panthers shot just 33 percent from three point range, while the Huskies shot 26 percent from deep.

The Panthers had only one steal to the Huskies six for the game. UNI also lost the turnover battle nine to seven. However, their strong defensive effort and timely shot selection wound up being the difference in the game.

Up next, the Panthers will return to the McLeod Center for four games with their next matchup against CSU Bakersfield on Wednesday, Nov. 13 at 7 p.m.