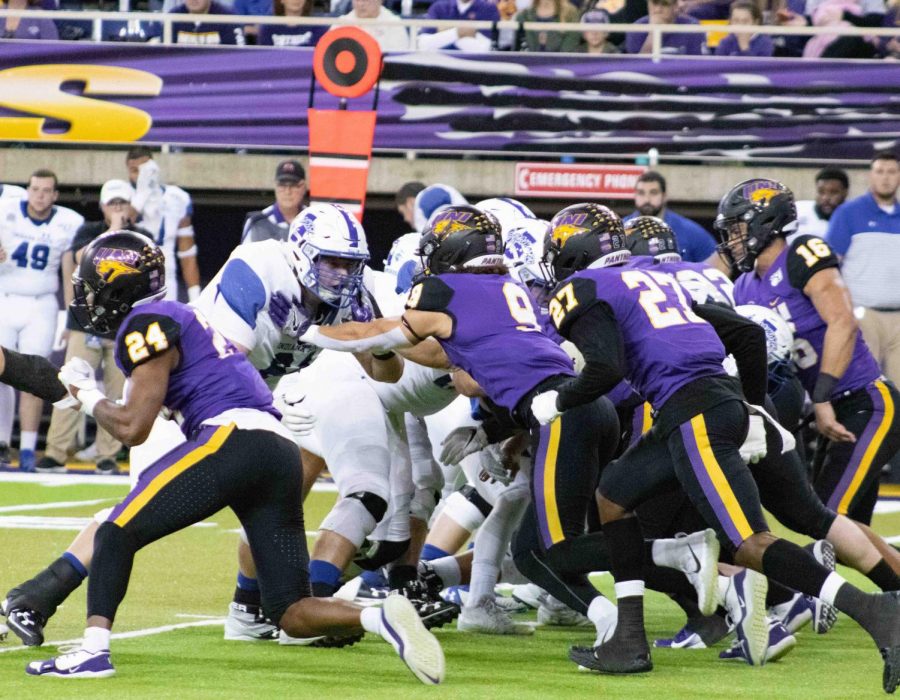 The Panthers came into Saturday ranked sixth in the recent FCS committee rankings with a record of 6-3.  Looking to stay undefeated in the Dome against the 3-6 Indiana State Sycamores, the Panthers did just that in a grind-it-out 17-9 victory sealed with a strip-sack by defensive end Elerson Smith.

“At the end of the day, good defenses are sound, play fast and play physical,” Smith said.  “I think you can check off all those boxes when we were playing at our best and creating turnovers like that.”

The Purple and Gold came into Saturday striving to finish the season strong in their playoff chase.

“We all know how hard it is to get to number five and we’ve been there before,” head coach Mark Farley said.  “With the schedule we’ve had and the things that have happened, I think for this team, they’re in a good spot.

“Right now, it’s pleasing but they have to know you’re one snap away from exiting that spot very quickly, too.”

The Sycamores started the few-and-far-between scoring trend with an early field goal eight minutes into the first quarter. The Panther offense responded quickly with a 47-yard pass from Will McElvain to Isaiah Weston on their very first play back on the field.  The McElvain-Weston connection led to a touchdown three plays later on a 25-yard pass from McElvain to Suni Lane.

Defensive back Spencer Perry came up big for UNI as he came down with his first career interception. That interception led to gains through the air before Trevor Allen rushed 13 yards for a touchdown to go into halftime with a 17-6 lead.

“A little into the second half when we started to stutter on offense and obviously things weren’t going our way and we [defense] knew that we had to step up,” defensive back Christian Jegen said. “Once again we had the lead going into halftime, it’s the same mentality as last week, as long as they don’t score, they don’t win.”

In the fourth quarter, tension built as Indiana State drove the ball to the Panther end zone. Those tensions were relieved by Jegen with an interception in the end zone for a touchback.

On their last drive, the Sycamores drove the ball into Panther territory before defensive end Elerson Smith clinched the win for the Panthers with a strip-sack, the third forced turnover on the day.

Up next, the Panthers will travel to Brookings, S.D., next Saturday to take on South Dakota State for the final road game of the regular season.