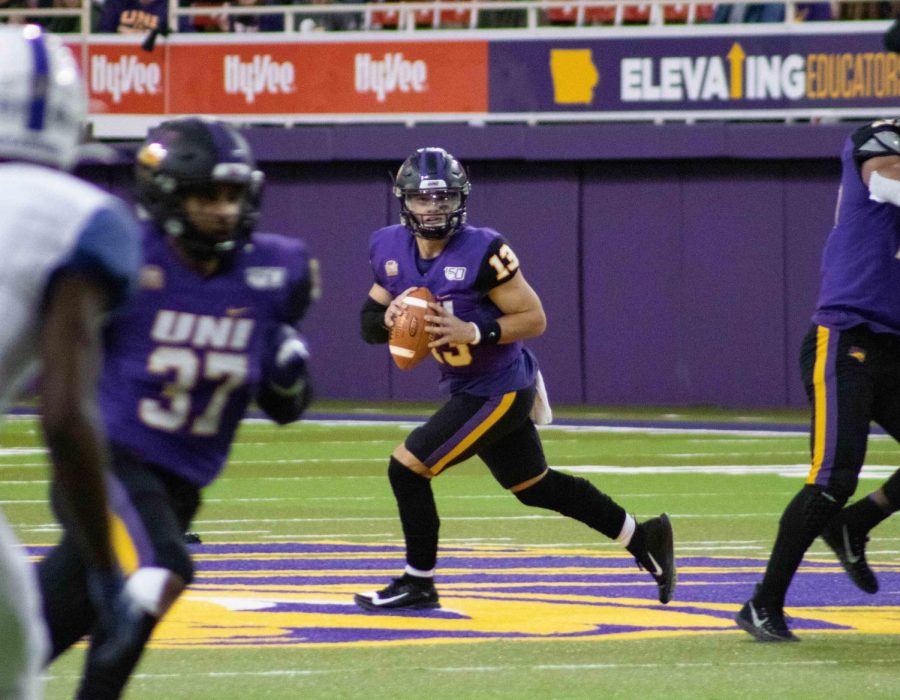 In a battle of two top 10 FCS teams, No. 4 UNI couldn’t overcome No. 8 South Dakota State, who was led by a defense that held their opponents to an average of 16.4 points per game this season. The Panthers went into halftime only down 7-0 and were mounting a comeback at 17-7 heading into the fourth quarter, but four turnovers on the day led to the 38-7 defeat for a 7-4 overall record.

“We just need to stay consistent and play a full game,” starting quarterback Will McElvain said.  “I don’t think we’ve played a full game yet, so we have to do that to be able to do what we want. We have guys that can.”

Redshirt freshman running back Sam Schnee gave the Panthers life at the end of the third quarter, punching in a 10-yard rushing touchdown to bring the score to 17-7.  However, a fumble and an interception on the next two drives by UNI led to the Jackrabbits running away with a 31-7 lead.

UNI’s passing game struggled without their leading receiver Isaiah Weston, resulting in just 85 yards through the air, but the running game made a strong effort to pick up the slack.

The Panthers were also without their starting running back Tyler Hoosman, but Schnee stepped up with 74 rushing yards and one TD in his first action as a Panther.  McElvain added 50 rushing yards, along with Trevor Allen and Aaron Graham contributing for a team total of 154 yards on the ground.

The end result wasn’t what the Panthers wanted, but head coach Mark Farley has been pleased with the next man up mentality.

“Our guys have stepped up and played well,” Farley said.  “We’ve adapted plans and it’s just resilience. We’re just looking for that next guy to come in now and fill that next role to be a difference maker in games to come.”

The Panthers will need to come together as a team to finish the season strong as they return to the UNI-Dome to face Western Illinois on Saturday, Nov. 23, set to kick off at 1 p.m.