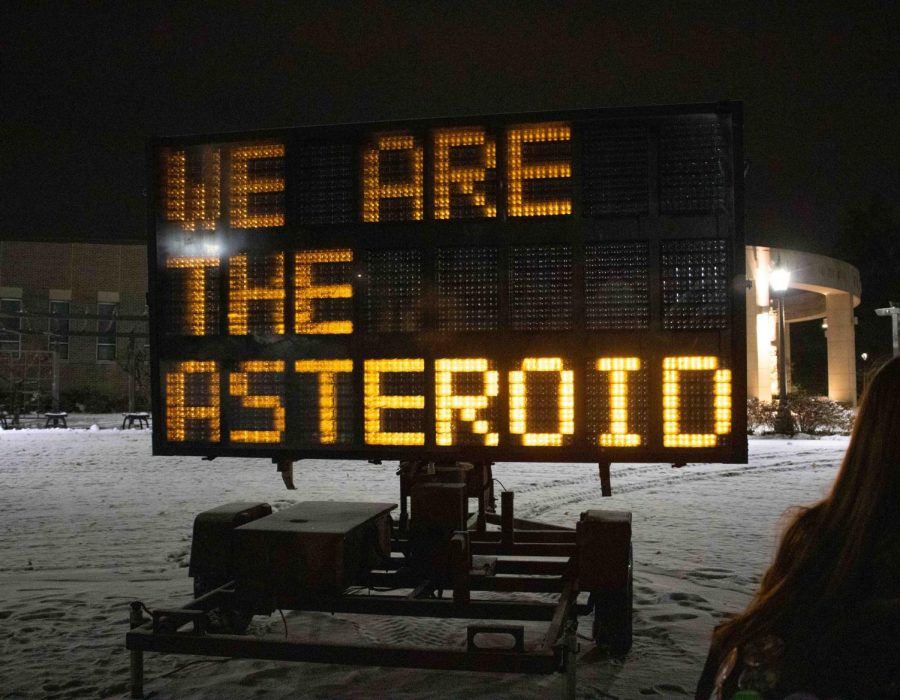 On Wednesday, Nov. 13, in the Lang Hall Auditorium, the Aldo Leopold Distinguished Lecture series presented its final installment. The lecture, titled “We Are the Asteroid: Art and the Ecological Crisis,” by artist Justin Brice Guariglia, explored the harrowing effects of climate change, what it means for our future and its relation to art.

Guariglia discussed what it means to be human and the impact humanity has on the environment.

“Humans have become the largest ecological force on this planet,” he said. “This is an ecological crisis bigger than any one individual can solve.”

He displayed photographs of mass floods in Italy, raging infernos in Australia and the Amazon rainforest on fire, all problems, according to Guariglia, related to climate change.

Our world is threatening to end, he said, leaving us with the question: is this really the legacy we want to leave behind for our children?

“It’s easier for us to imagine the end of the world than the end of capitalism,” Guariglia said.

Guariglia showed pictures of his journey with NASA scientists on their 2016 mission Operation Ice Bridge. The team, along with Guariglia, went to Greenland to study the soot on the large glaciers. Guariglia took many photographs and used them in one of his exhibits. He also learned more information about the soot and what it means for the ice on our planet: when dark soot covers the glaciers, they absorb more solar heat and melt more quickly. Guariglia explained that scientists predicted the level at which the Arctic is melting now would be happening in 2050, but humanity has drastically sped up the process.

Throughout the night, Guariglia showed pictures of his artwork. Many of his pieces involve plays on words, such as his short “eco haikus” presented on electronic traffic signs. He showed pictures of some of his previous signs, with phrases like ‘Biosphere BBQ,’ an imitation of a popular Dallas BBQ sign, and ‘Baked Alaska,” a double reference to the dessert and the increasing Arctic temperatures.

“Alaska is baking. There are new species of insects and animals traveling to the state in response to its warmer temperatures. The Inuit people are having to create new words for these animals as they’ve never seen them before,” Guariglia said. He said that humans emitted 15 million pounds of carbon dioxide into the atmosphere in 2014.

Guariglia then talked about a large source of ecological problems: water. He said that some locations have too much and suffer intense flooding, some don’t have enough and suffer from intense droughts, and many do not have access to clean water, like Flint, Mich., and many places in India.

While climate problems like these can affect everyone, Guariglia explained that in most cases, less developed countries suffer from the effects of climate change firsthand. There are an estimated 65-67 million refugees worldwide, and a large percentage of them are displaced because of climate change. Scientists estimate there will be around 100 million refugees by 2050 because of the ecological crisis.

“These people aren’t leaving because they want to. It’s strictly an act of survival, an act of desperation,” Guariglia said.

Guariglia brought up the topic of some of the wealthiest people in the world trying to bring life to other planets, such as billionaire Elon Musk, CEO of SpaceX.

“When all the richest people want to leave, you know there’s a problem,” Guariglia said, adding that “there is no ‘away.’” This is the only Earth we have, and Guariglia believes there won’t be anyone living on Mars or any other planet for a long time.

Guariglia discussed one of his recent art projects from Earth Day 2019, when he projected his creations on traffic signs in front of Somerset House in London. One of the most notable pieces listed the names of over 200 extinct animal species. Guariglia worked with writers, poets, other artists and indigenous elders to get inspiration for the exhibit.

The Lang Hall audience was somber as the animals’ names appeared on the screen, mimicking the piece. The list went so fast that it was difficult to read the full names.

As the lecture came to an end, Guariglia shared his advice and hope with the audience.

“We need a human-centric future, to [put] people over profits. And people always ask me, ‘What can I do?’ Get out and fight. Talk to people and raise awareness about the issue, even if it’s just one person,” he said. “And vote, I recommend we all vote for planet Earth. I’m looking at this issue from multiple perspectives, one of them as a parent. I want my children looking back and saying my dad did everything he possibly could to get the world get back on track.”

Kathryn Rozanek, a sophomore majoring in elementary/middle level education, and Laura Spies, a freshman majoring in environmental science, both enjoyed the lecture.

“I definitely liked [the presentation]. Everyone typically has a minimal understanding of climate change, but his presentation went into detail and showed how big of an impact it has. It really surprised me,” Rozanek said.

“It was very eye-opening, and gave me lots of new scientific terms to use when discussing climate change,” Spies said. “It’s hard to wrap your head around the subject sometimes, because it’s such a vast and abstract problem, but the presentation really helped get the most important points across and show why it’s such a pressing matter.”