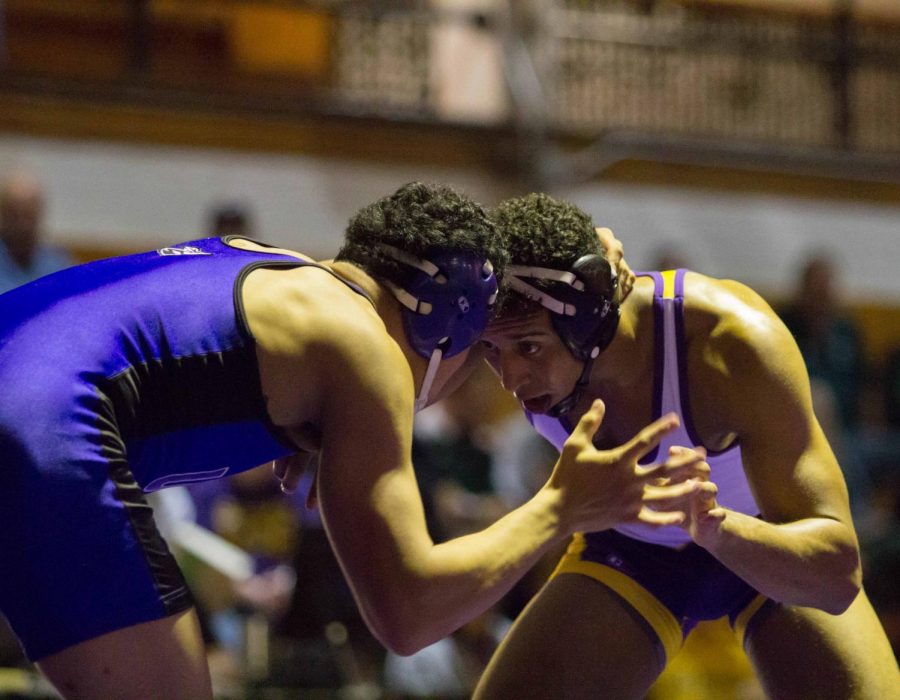 UNI Wrestling traveled out to Evanston, Ill., on Sunday, Nov. 17 for a battle with the Northwestern Wildcats.  The Panther Train sought a solid win over their Big Ten opponent, but fell just short 24-20.

“We could look at a few guys and say, ‘Wow he wrestled incredibly’ […]  A few of the other matches though, I can’t say I like how we competed,” head coach Doug Schwab said.  “That’s something we have to remedy or find someone else to put in there. This is Division One athletics, guys do have to perform to a certain level, not meaning they have to win, but how they compete.”

“Skudlarczyk was wrestling a really good guy,” Schwab said.  “That guy was a really good wrestler, but so was Jack.  He gave himself opportunities early, had a good gameplan, just being aware and executing just even a little bit more.  That’s going to come, but I like how he’s competing.”

Michael Blockhus was able to turn things around for the Panther Train as he forced a 13-3 major decision, followed by a close 4-3 decision by Max Thomsen.

The Purple and Gold then dropped two more matches to the Wildcats as Keaton Geerts was pinned at the 3:48 mark, and Pat Schoenfelder was shut out for a 15-0 technical fall.

Coming down the stretch, Bryce Steiert grabbed a 13-1 major decision before Taylor Lujan pinned his opponent at the 2:33 mark, bringing the score to an 18-17 Wildcat lead with two matches remaining. Jacob Holschlag was injured in his match, which gave Northwestern the 24-17 lead in the match, before Carter Isley finished off with a 6-0 decision. The Panthers ultimately fell short as a team by a score of 24-20.

Coach Schwab emphasized the need to come together as a team.

“We need to have a full team performance, not just five guys, that’s only half of our team that steps out there. So we need to have every single guy one through ten.”

The Panther Train will keep rolling through Big Ten competition as they host fourth-ranked Nebraska on Sunday, Nov. 24 at 1 p.m. in the West Gym for their home opener.