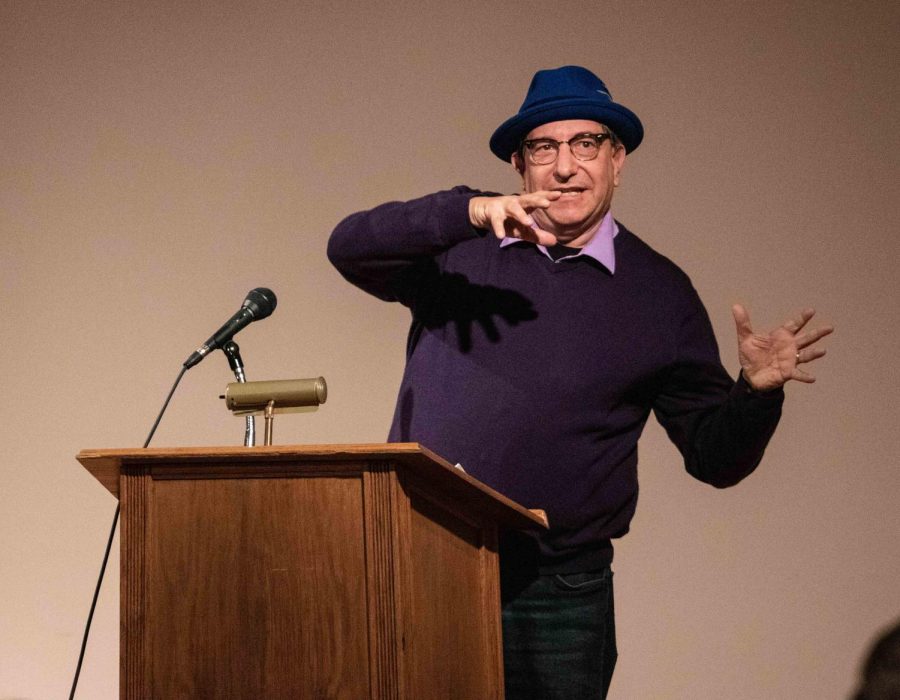 UNI community members gathered for an open mic and a presentation from English Professor Grant Tracey during the last Final Thursday Reading of the fall semester on Nov. 2 at the Hearst Center for the Arts.

The final installment of the Final Thursday Reading Series for the fall semester took place on Nov. 21 at the Hearst Center For the Arts.

The evening began at 7:15 p.m. with an open mic, allowing local authors to showcase their original work. Songs, sonnets, short fiction pieces and essays of varying genres were shared by participants. UNI students and community members alike read during this portion, the sign-up sheet for which filled and overflowed into a waiting list. There was just enough time to allow everyone a chance to share their writing.

The featured speaker for the evening was UNI English professor Grant Tracey. Tracey shared a section from his newest book, “Neon Kiss,” the third in his Hayden Fuller Mystery series. Tracey gave the audience a brief synopsis of the book before he began reading.

Tracey detailed the backstory and connections between the characters featured in the upcoming excerpt. Before he began his reading, which lasted a little more than half an hour, Tracey added, “Oh, one last thing, there’s a cult involved. That might be important!”

Tracey explained how he was inspired by many elements of the 1943 femme fatale novel, “Laura,” by Vera Caspary.

“My first love has always been crime fiction,” Tracey said.

Tracey explained how he wanted to open up the narrative more for some of the characters in “Neon Kiss.”

“I wanted fullness of my characters,” he said. “There is a large arc across the four book series, and smaller individual arcs in each book.”

“Neon Kiss” will be published in February or March of 2020. The first two books of the Hayden Fuller series, “Cheap Amusements” and “A Fourth Face,” are available now.

There were many UNI students present in the reading’s varied audience. Allie Marchesano, a senior English Education major, said she had an excellent time.

“It’s actually my first Final Thursday. I really liked the aspect of having an open mic and then listening to a published author. It really gives you a sense of direction for your own book,” she said.

“The first time I came here was for a class assignment, but I keep coming back on my own. I love listening to people sharing their work and there’s such a nice community feeling when I attend the readings,” Peterson said.

The Final Thursday Reading Series will take a break for the month of December and resume in January 2020.