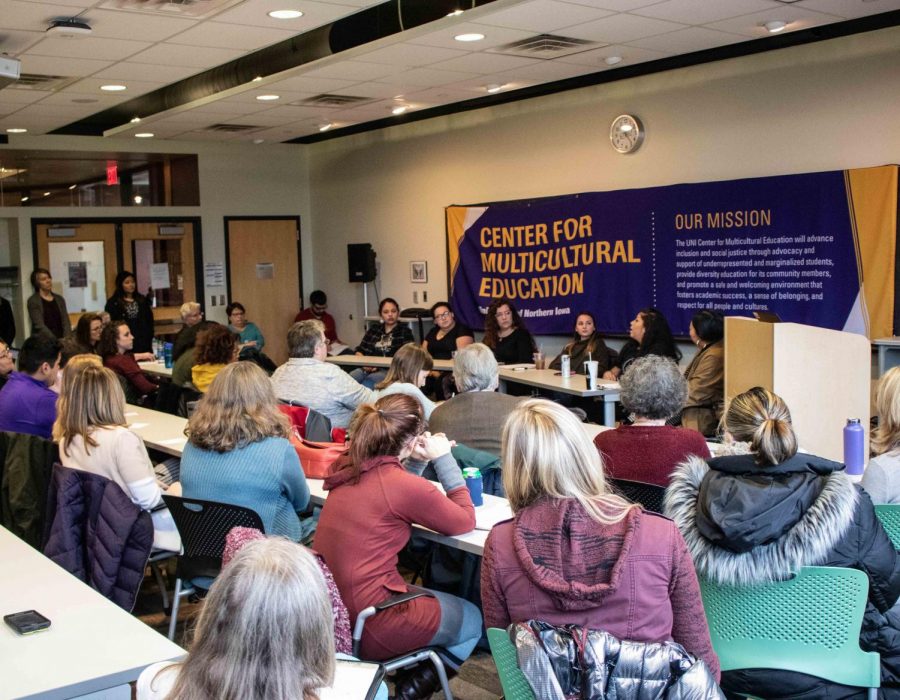 UNI students and alumni of Native American heritage participated in a panel kicking off the CETL's new series "What Your Students Want You To Know," addressing the concerns of under-represented groups on campus.

On Nov. 21, the UNI Center for Excellence in Teaching and Learning (CETL) inaugurated a new series of panels titled “What Your Students Want You to Know.”

Each discussion features a different group of under-represented students who want to express their concerns and address faculty and staff on matters regarding inclusion at UNI.

Esther Vuong, a graduate assistant at the CETL, introduced the first of the series of talks, focused on Native American students in honor of Native American Heritage Month. She explained why this series came into existence, as well as what the university hopes to achieve with it.

“We learned at a conference that another school was doing [the series] and we thought we would bring it to you, here at UNI. The goal is to feature different groups and give them an opportunity, a platform to talk about their experiences and different perspectives. We are so excited for this to happen, and to be able to reflect on different issues of diversity, equity and inclusion,” Vuong said.

Speaking to a large room overflowing with faculty, staff and students, Waseskuk started the panel by honoring the land and explaining the meaning behind this ritual.

“I think this is an important practice and something that I hope you will consider to incorporate in any kind of public event you might have,” Waseskuk said.

Afterwards, the speakers introduced themselves, the Native American tribe they belong to and their academic or professional focus.

The significance of inclusion, one of the central themes of the panel series, was discussed by the speakers towards the beginning of the panel.

“I think inclusion is inviting people to the table. As indigenous women, we are not often asked to that table, but this generation does not ask, we just sit at it,” said Etringer. “That’s what inclusion means to me. Everyone sits at the table, gets a say and […] is respected and valued.”

The other panelists added to this definition, pushing society to acknowledge indigenous people as inhabitants of the modern world.

“We are not dinosaurs,” Sprague said.

Among the key topics of the talk was the role that the Native American community has in the UNI campus, where a specific organization for indigenous people is still missing, despite the effort of several students in the past.

“I am trying to start something here at UNI. It would matter to get a room for ourselves, where we can come together and learn from each other,” said Wanatee. “It feels good to be around people like you, that understand you and come from the same background, as well.”

Towards the end of the discussion, the speakers came back to the original idea of teaching the instructors how to include Native American students in the classroom and in the general discourse.

According to the panelists, the main focus should be on decolonizing the syllabus, a term used to describe the practice of learning the history of the land and of the indigenous people, and addressing today with the indigenous perspective in mind. At the same time, they discouraged professors from putting indigenous students on the spot.

“Professors will ask me, ‘What’s it like for you?’ in front of the whole class,” Sprague said. “Yes, I am Indian, but I am also black and white. I am not solely one thing.”

Gregory Bruess, a history professor who was present at the panel, was impressed by the effective and thoughtful way the speakers had considered the issue in question.

“The indigenous population on campus is the minority; they represent 1.6% of the American population. It was interesting to hear what their impressions are,” Bruess said.

“Taking part in this kind of meeting is our choice, an opportunity to really be an ally to the students,” Clayton said.

The CETL panel series aims to educate others on the opinions of other minority groups in the future months.

“We are still here. We are not going anywhere. We need to start this conversation,” Etringer said. “Frank LaMere, an indigenous activist, said ‘Nothing changes until someone is made to feel uncomfortable.’ It is okay to have the conversation that makes us uncomfortable, because that means we’re including more people in the dialogue.”