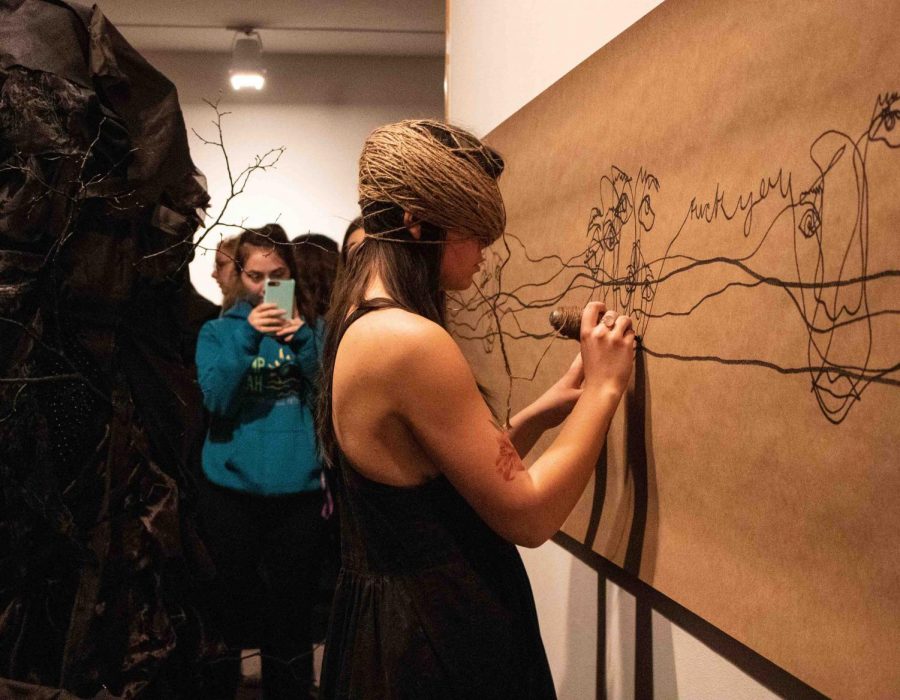 At the door, visitors were greeted by a performer dressed in all black tying string to a pillar. By the gallery entrance, a group was playing foursquare. One of the players wore a propellor hat and blew a whistle.

Near the entrance of the gallery, was an auditorium rolling student projects. During one of the videos, a woman shook a bottle of pills in between footage of her talking to her dogs and cats. The second video that played featured eye movements coordinated to music. A woman in a pink ski mask danced with a board that had googly eyes attached in the third video. After she finished dancing, the woman hit the board with a hammer and spit candy onto it.

Within the gallery, several performance acts were being put on. One woman in a clown costume laughed while smashing cherries in a bowl. Another performer traced the words “I’m here” with her fingers on a piece of paper using a glass of water. The gallery was filled with the sound of air horns, power tools and a woman screaming profanities through a megaphone.

The event was coordinated by performance art instructor Aypryl Thompson. In addition to the students from Thompson’s class, several performers came from Angela Waseskuk’s three-dimensional art class, where students worked on an assignment titled “Wearable Art.” Those who participated wore colorful costumes and elaborate dresses made out of cloth, felt or other materials. Students in the class donned various headpieces, including a glowing purple cloud made of cotton.

Interactivity was woven into some aspects of the show. One artist did magic tricks with a set of playing cards in her hands. Attendees were also given the opportunity to write goals and messages on black scraps of paper for another performance. After their message was written, the artist sewed it into a string of positive messages.

Gallery Director Darrel Taylor wanted to emphasize the amount of effort that went into putting the show together.

“There are a lot of people in the performance art class, and we combined that with our 3D design class,” Taylor said. “We also have performance art alumni who return. We have over 50 performers. That includes people who recorded video for the event. It’s a very exciting time for the department.”

According to Thompson, Wasekuk’s class had about 35 students while her own performance art class had around 40. Many students also worked on designing posters to advertise the show.

Thompson has been teaching performance art classes for 13 years. She has helped coordinate 26 iterations of “Vertigo.” All are welcome to take her class, art and non-art majors alike. She described it as a great class for anyone looking to bolster their confidence in public situations.

“Students love to see how it’s evolved since they’ve been here,” Thompson said. “The class becomes long-term friends or roommates. They stay connected forever because of this class. We call it the performance art family.”