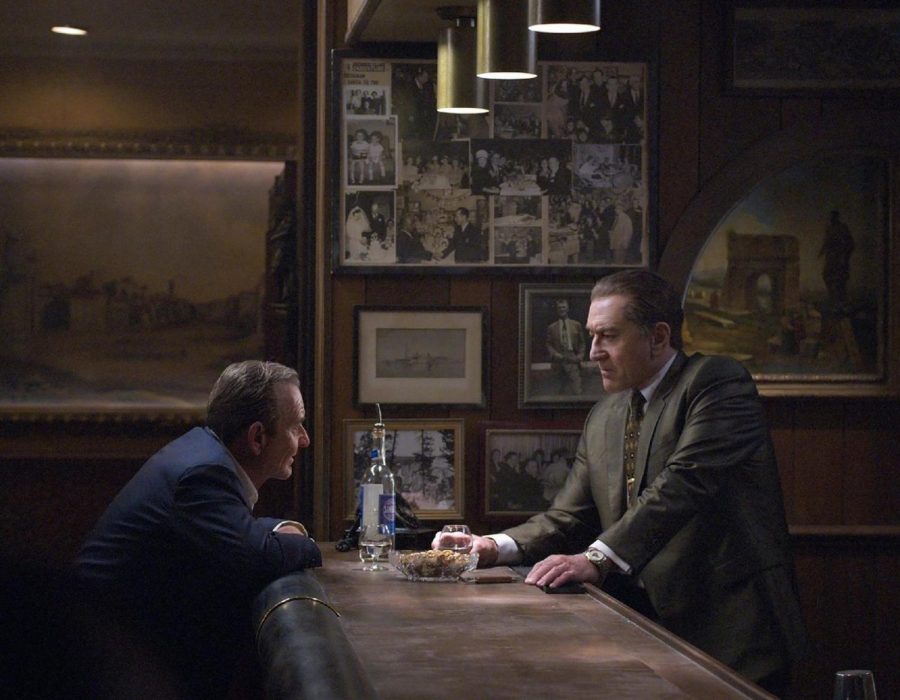 Sprawling 50 years and dozens of features, director Martin Scorsese has crafted one of the finest filmographies in cinematic history. Over the decades, there appear to be two sides to the revered auteur’s style of filmmaking. One side is filled with fast-paced and violent storytelling in films such as “Goodfellas,” “Casino” and “The Wolf of Wall Street.” The other side is a more slow and quiet study of the human condition that can be found in “The Last Temptation of Christ,” “Kundun” and “Silence.” Now, after years of being disjointed, these distinct styles have finally melded together in the director’s newest Netflix film, “The Irishman.”

Telling the true-ish story (it’s still hotly debated whether any of it is true) of mob hitman Frank “The Irishman” Sheeran, the film places its main character at the forefront of American history in the mid-20th century. Over the years, Sheeran became increasingly attached to mob life, eventually leading him to the infamous teamster Jimmy Hoffa, whose fate is still unknown to this day. But as Frank rises the ranks within the mob, we watch as he slowly descends into a life of violence where the riches are short-lived and damaging effects are ever-lasting.

The first thing you’ll probably notice when looking up the film is its massive 209-minute runtime, which makes it the longest mainstream movie released in over a quarter-century. That amount of length may be daunting on paper, but Scorsese makes every minute of it glide by with ease. His usual style of kinetic editing and pacing are masterfully employed and keep the film entirely thrilling throughout. By the time the film has finished, you feel as though you have lived a life with these characters rather than just watched it.

Another production facet that the film carries is a revolutionary new technology that digitally de-ages its main cast so they’re able to play their characters over multiple decades. Admittedly, the gimmick doesn’t work perfectly as the 76-year old Robert De Niro never convincingly looks like his 30-year-old self. But even with its missteps, the technology is never a bother and seamlessly works its magic in the scenes where the characters are closer to the actor’s age.

Adapted by Steven Zaillian from the book “I Heard You Paint Houses,” “The Irishman” is a dense (maybe too dense) and depressing crime epic. Scorsese’s trademarked main character narration is here in its entirety as Sheeran tells his life story while in a nursing home near the end of his life.

Even though Scorsese implements his usual gangster style within the script, its use here is for an altogether different purpose than previous films. Instead of showing the often joyous life of criminals with smugness, the script fully exposes us to the doom and gloom that a life of crime brings to someone.

Frank is the main character in our story, but within his story, he’s always off to the side as he gets caught up in the everlasting destruction around him. By the time the third act reaches and the characters are reflecting on their past, their sad nature is fully exposed. All the acts these characters committed were paid for in death and despair, with the reward being even more of the same.

Teaming up with Scorsese for their ninth collaboration, Robert De Niro does his best work in decades in the titular role. His performance as Frank is closed-off and internal, further highlighting that Sheeran had little control over his life. The further the story progresses, the more haunting De Niro becomes as he can more clearly see where the road will take him.

On the complete opposite side of the spectrum, Al Pacino plays the infamous union boss Jimmy Hoffa. We’ve always known that Pacino has fervor in his acting repertoire. His only problem over the years was how to effectively channel it to the right performance. Fortunately, there seems to be a method to Pacino’s madness here as his boisterous fire perfectly counters De Niro’s coldness.

Playing against type is another frequent Scorsese collaborator in Joe Pesci as mob boss Russell Buffalino. Even if it may be his quietest role to date, Pesci instills fear through his menacing delivery and stares.

Rounding the ensemble cast is Harvey Keitel, Bobby Cannavale, Ray Romano, Jesse Plemons and Anna Paquin; all of whom do great work in their supporting roles.

Proving that the two sides of Martin Scorsese work better together than separate, “The Irishman” is a crime classic on par with the greats before. Its extensive tale of remorse and sorrow is worth every minute you put into it. If you only see a handful of movies a year, make sure this Netflix epic is one of them.