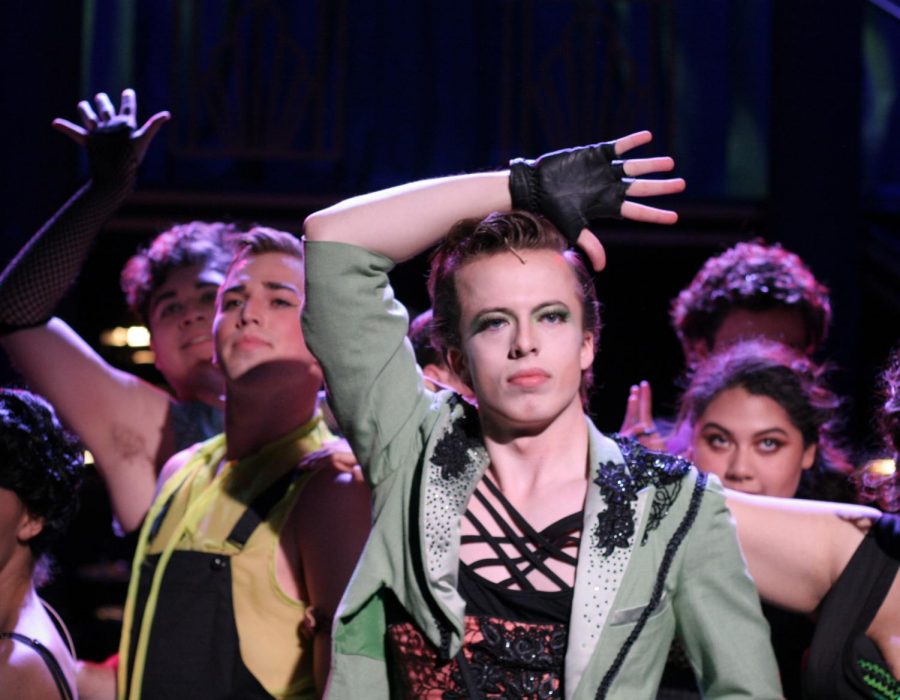 TheatreUNI wrapped up its winter season in StrayerWood Theatre with a simultaneously ostentatious and gut-wrenching musical production of “Cabaret” which ran from Nov. 20 to 22 and Dec. 4 to 8. Amy Osatinski served as director for this UNI production of the iconic Broadway musical.

“Cabaret” is an American musical that takes place in a Berlin nightclub, called the “Kit Kat Klub,” as the sun sets on the decadence of the 1920s. The Ebb and Kander Broadway show premiered in 1966 and follows American novelist Clifford Bradshaw as he grapples with love, financial necessity and the dawn of fascism in Germany.

“Leave your troubles outside,” said the Master of Ceremonies (Emcee), portrayed by Noah Hynick, to the audience. “So — life is disappointing? Forget it! In here, life is beautiful.”

The bustle of the nightclub settled audience members into the lavish and carefree nature of 1920s Germany. Tables were set up surrounding the main stage, where audience members could sit and order drinks from Kit Kat Klub servers. The interactive set served as an integral piece in the development of the storyline.

As the musical progressed, the music, set and character development all contributed to the slow and nearly imperceptible deterioration of 1920s decadence and hedonistic style. Its multifaceted themes were conveyed through a skillful and nuanced show in nearly all aspects.

Contrasting the untroubled nightclub with the crumbling world outside, main characters Sally Bowles, Cliff Bradshaw, Fraulein Schneider and Herr Schultz have varying knowlege of the growing threat of the Third Reich.

Sally (Erika Bailey) and Cliff (Thayne Lamb) hit it off at the Kit Kat Klub one night, and after Sally is let go from the nightclub where she performed, she convinces Cliff to give her a place to stay. The two fall in love, but both have doubts about trading in their wild lifestyles for the family life. Fraulein Schneider (Abigail Chagolla) and Herr Schultz (Andrew Oleson), Bradshaw’s landlady and a Jewish grocer, respectively, fall in love as the Nazis rise to power. Despite the rosy haze they seem to be perceiving the world through, the four soon realize that the political climate of Berlin is worse than they once thought.

As the lights come up on Act Two, Kit Kat Klub entertainers imitate this historic transition as they impress the crowd with an energetic, choreographed dance number. Toward the middle of the piece, however, the jovial and entertaining atmosphere dissipates as a snare drum cadence grows in the background. As the militaristic rhythm emerges, the Kit Kat Klub girls and boys march in the style of footsoldiers, ending with a salute to Adolf Hitler.

Despite the negligence of those stuck in the age of nightclubs, parties and alcohol, the rise of fascism is becomes more difficult to ignore for regular people.

The setting of the Kit Kat Klub provides “Cabaret” with a mechanism to include non-linear musical numbers that comment on the deteriorating political and social climate. Additionally, the Master of Ceremonies acts as a guide, transitioning from storyline to separate songs. Some of these include: “Two Ladies” and “If You Could See Her…,” which features the Emcee dancing with a female Gorilla he appears to be in love with. In a devastating moment that contrasts from the general levity of the Emcee thus far, he reveals that the “gorilla” is, in fact, Jewish.

Erika Bailey’s portrayal of Sally Bowles offered an incredibly versatile and emotional aspect to the character. “Cabaret” certainly allowed Bailey to shine as a triple threat. From choreography-heavy numbers like “Don’t Tell Mama” and “Mein Herr” performed in the Kit Kat Klub, to the emotional and heart-wrenching “Maybe This Time,” Bailey showed off her wide range of proficiency in dancing, singing and acting. Her performance of the title song “Cabaret,” in particular, was one audience members will not be susceptible to forgetting.

“Cabaret” serves multiple purposes in the musical, as is hinted by its name. It represents a character development for Sally, as she refuses to wake up from and let go of the ignorance she resides in. Her character is distraught, after having had an abortion and giving up on her life with Cliff Bradshaw.

Secondly, “Cabaret” is a chilling manifestation of the death of 1920s society and political culture that is shattered by the Third Reich’s rise to power. Soon after, Cliff is shown fleeing Berlin without Sally.

At its core, “Cabaret” is modeled after Christopher Isherwood’s “Berlin Stories,” but the Broadway musical’s foundation is drawn from John Van Druten’s play adaptation of the aforementioned novel.

However, the production’s transformational journey did not end there. In over 50 years since the musical’s debut, developments can be seen in the conspicuousness of Cliff’s bisexuality, the addition of several musical numbers and a new, nightmarish take on the ending of the musical (which this particular production chose to adapt).

Credit is due to TheatreUNI for being brave and skillful enough to pull off the ending sequence they chose. As the musical came to a close, the audience grew sickeningly silent as they realized the curtains of the Kit Kat Klub had disappeared, leaving in its absence a thin and wiry frame. The orchestra had left the bandstand, and the cast was nowhere to be seen.

As the Emcee flowed down the set’s stairs in for one last time, a song reminiscent to the musical’s opening tune, “Willkommen” could be heard once again. Speaking directly to the audience, the Emcee asked, “Where are your troubles now? Forgotten? I told you so. We have no troubles here. Life is beautiful — the girls are beautiful — even the orchestra is beautiful.”

By reprising the same, lighthearted song that the audience was exposed to at the beginning of the musical, it is made evident how much has actually changed in the atmosphere.

As the Emcee reached center stage for the last time, the lights highlighted the barbed wire hidden in the wireframe, and the flashy Kit Kat Klub sign rose into the rafters, replaced by infamous the “Arbeit Macht Frei” (translating to “work sets you free”) sign from the entrance of Auschwitz. He slowly unzipped his overcoat to reveal the striped suit worn underneath, denoting him as a concentration camp prisoner. The lights went down as two enormous Nazi banners billowed from the ceiling.

Suddenly, sirens could be heard, along with a German train conductor. Those who had previously been waiters and waitresses for the Kit Kat Klub had become Nazi officers.

As sirens blared and guests were brusquely ushered out of the theatre, they walked through a hallway filled with Nazi imagery from fascist Germany, as well as pictures of modern antisemitism in the United States.

According to Osatinski, this was no mistake. The musical lends itself to cultural and political criticism that can be applied to the modern era. “Cabaret” is widely considered to be a conceptual musical due to the dual structure found between the actual storyline and out-of-place musical numbers. This duality allows for the musical to add on to what is happening in the plot.

In Osatinski’s Director’s Note, she writes, “Across the United States in 2019 and 2020, many theatre companies are producing ‘Cabaret.’ Like UNI, these companies recognize the very real parallels between Germany in 1929 and America in 2019.”

Between outstanding performances from Hynick as the Emcee and Bailey as Sally, along with the clear intent to connect modern America to the rise of Nazi Germany, UNI’s “Cabaret” left the audience feeling like the floor had dropped from beneath them. The “it can’t happen here” mentality depicted in the musical is a dangerous way of thought, and this show was a crucial reminder to audience members about the dangers of complacency on social justice issues.