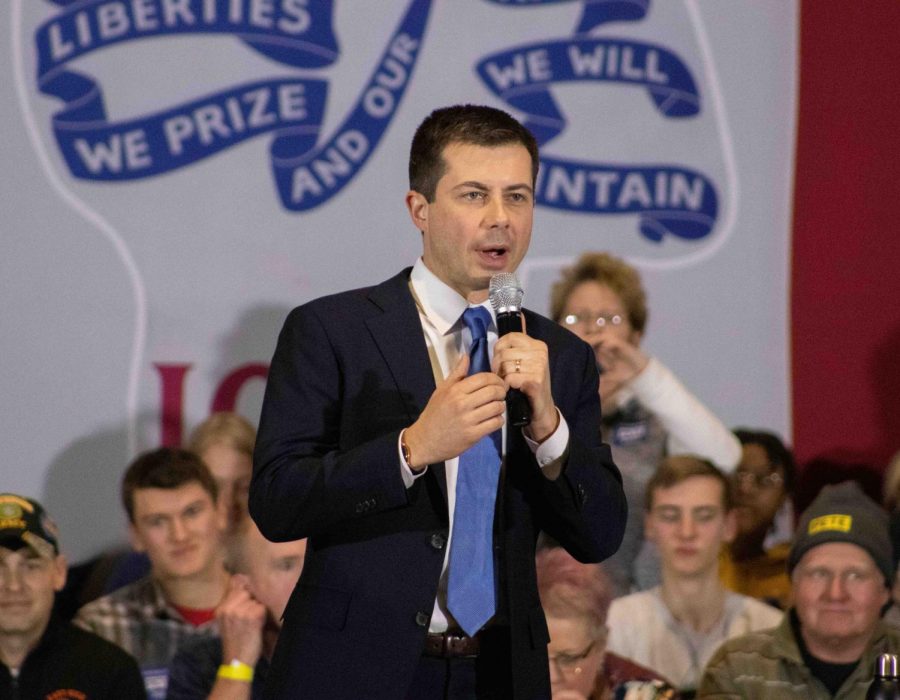 Buttigieg’s talk was preceded by the endorsement of several prominent politicians of Black Hawk County, such as Waterloo mayor Quentin Hart and long-standing state senator Bill Dotzler, who announced his support for Buttigieg in December.

“One of my UNI professors once told me, ‘The world is run by those who show up,’ and that is especially important for this election. Mayor Pete has the important perspective, as a mayor, of trying to bring people together, and that gives him the ability to bring voters away from Trump,” Dotzler said.

Buttigieg started his speech by engaging in conversation about his long-standing professional relationship with Hart. He focused on the importance of small rural and industrial communities in the Midwest, comparing Waterloo to his hometown of South Bend, Ind.

“Every mayor winds up living and breathing everything that goes on in their city. We feel the pain of everything that isn’t going right and the triumph of every positive thing that happens,” Buttigieg said. “We would be better served if we could get Washington to run a little more like our best-run cities and towns.”

A central point of the town hall was the role that the Iowa caucus will have in determining the future. Buttigieg described how this part of the country can lead in a time of deep change.

“Here we are, less than 20 days from the Iowa caucuses that are going to set the trajectory of the nomination, and therefore the presidency, the country, the history of the world. A lot rests in your hands. No pressure,” Buttigieg said.

The town hall also focused on several specific issues that, according to Buttigieg, caused Trump to win the presidency in 2016 and still need to be resolved today. Buttigieg discussed his position on gun violence, climate change and democracy, developing his speech around a series of values that he considers to be inherently American.

“The purpose of the presidency is to empower and unify the country, focusing on the values we share as Americans and letting them lead us in a progressive way,” Buttigieg said. “Patriotism is not the cheap nationalism of hugging the flag or throwing military parades for the President. I am talking about honoring the flag by honoring the values of the Republic for which it stands and the lives of our troops making sure they are never sent away to a conflict that could have been avoided.”

The topic of the troops and Buttigieg’s time in the military returned when it was time for the audience to ask questions. Thomas Anderson, a veteran from Waterloo, talked about his difficulties in receiving dental care and fair treatment as a black businessman in the area. Anderson asked Buttigieg to speak up for the problems of veterans if elected.

“I want to point out how unacceptable this kind of discrimination is, and as President I am ready to enforce regulations about this kind of behavior towards small minority business owners,” Buttigieg said. “Talking about healthcare in the military, we will make sure that if we can do such a great job at providing it to somebody in order to make them go to war, we should be able to do just as good of a job taking care of soldiers after they come back.”

“The event had a lot of good energy,” he said. “Pete did a very good job at relating to Iowans. I particularly enjoyed how he made national security a priority because of his experience in the military. I actually decided to caucus for him last night during the Democratic debate, and he definitely convinced me today.”

Buttigieg concluded by emphasizing the importance of getting organized and being politically involved in view of the caucus.

“Watching the national news can create a temptation to turn it all off. This is our chance to do the very [opposite], and I’m hoping you will reach out and connect with people in your life to encourage them to remain involved and remind them that the power is in their hands,” Buttigieg said. “I’m asking you to help ensure that Iowa makes history once again.”