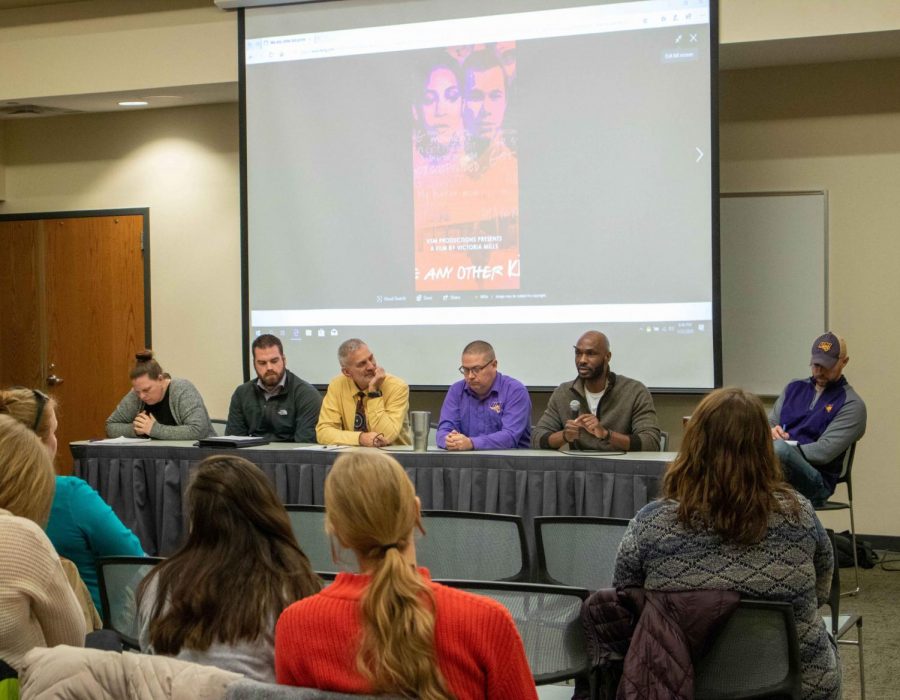 UNI Department of Social Work and the Master’s in Social Work Student Associated collaborated to host a film screening and panel discussion about “Like Any Other Kid,” a documentary on the Missouri Method.

Last week, the UNI Department of Social Work hosted a film screening and panel discussion about the use of therapeutic approaches to promote behavioral change in the juvenile justice system. The two sessions of this program were held in Maucker Union on Wednesday, January 22 and Thursday, January 23.

The documentary, “Like Any Other Kid,” featured three institutions that had adopted the Missouri Method, which emphasizes a group approach to rehabilitation for teens in the juvenile justice system. Interviews with youth and social workers revealed the effectiveness of this approach while also conveying the difficulties and trauma faced by kids in the system.

Following the 85 minute documentary, a series of panelists discussed how a therapeutic approach is beneficial to youth in the juvenile justice system, as well as more effective in the long term. The discussion was then opened up to include questions from the audience.

According to “Like Any Other Kid,” the current juvenile justice system is failing to meet the needs of at-risk youth. Instead of addressing the trauma and pain these kids are feeling, many institutions take a punitive approach to rehabilitation. Not only does this approach neglect the hardships of children in the system, it also creates an environment where youth are more likely to repeatedly end up incarcerated – even into adulthood.

The documentary said that the Missouri Method has been proven to help the children that need it most. By listening and trying to understand their pain and trauma, social workers are better able to provide care for these individuals. In institutions that adopt the Missouri Method, youth are more likely to get – and stay – out of the juvenile justice system and go on to lead happy and productive lives.

Nicole Valentine, graduate student and co-president of the Master’s in Social Work Student Association (MWSWA), assisted in the coordination of this event, along with fellow graduate students with the MSWSA.

“Trauma-informed care is so important,” Valentine said. Her graduate program emphasizes the recognition and treatment of individuals who have experienced trauma in the past. However, this is not always the case in institutions around the state.

“Most are very punitive, focused on punishments which can include isolation and restrainment. I’ve actually seen this in other facilities around Iowa where I’ve worked, and it’s horrible. There’s so much pain […] these people have and that pushes them to do things that they might not want to do. They have learned that they just need to survive,” she said.

According to Valentine, looking at rehabilitation through a trauma-informed lens is important because social workers can begin to re-teach these individuals how to look at life.

“Trauma tells people to shut down,” she said, “and when they are constantly subjected to retraumatization by authority figures, [nothing is] going to change.

“I was impressed to hear the things that the panelists were experiencing with the trauma-informed care in the state of Iowa,” Valentine said. From what she heard from the panelists, she thinks Iowa as a whole is moving forward and that state’s systems are progressing in the right direction, even if they’re not there yet.

A number of students, faculty, and community members attended the event and asked questions of the panelists and coordinators. For those not involved with social work but still wanting to make a positive difference, Valentine encourages learning about trauma and how trauma affects the brain and body.

“The [ideology] that we use a lot is to switch our language from ‘What’s wrong with you?’ to ‘What happened to you?’” she said. “Even if you can’t do [much] to help them, the most important thing for people to remember is to not blame the person, but their circumstances.”