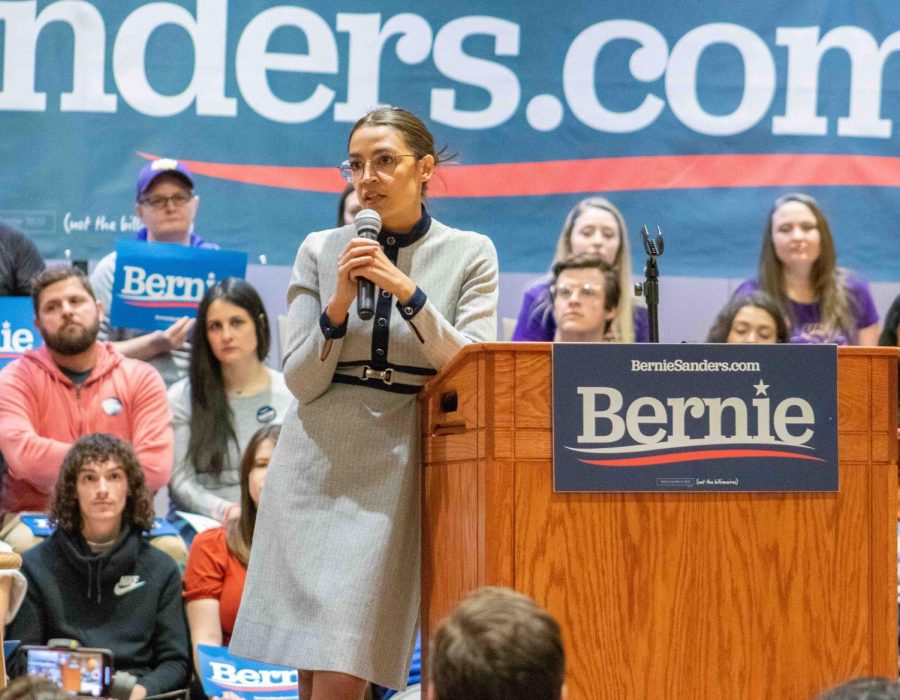 On Jan. 25, U.S. Rep. Alexandria Ocasio-Cortez (D-N.Y.), filmmaker Michael Moore and Rep. Mark Pocan (D-Wis.) visited UNI for a town hall in Maucker Union in support of Bernie Sanders’ campaign. With the highly anticipated Iowa caucus approaching, Democratic presidential candidates have increased their presence in the state. Those that are senators, however, are occupied in Washington D.C. for the impeachment trial against President Trump. Sanders’ campaign organized political rallies led by public figures who endorse him and are able to share his message with the public.

Moore, an Oscar-winning documentary filmmaker, has been supporting Sanders since October 2019 because he believes that Sanders can bring fundamental change to the country.

“When [Bernie] enters the White House, a year from this week, it’s not Bernie Sanders walking into the Oval Office. It’s the teachers, the nurses, the construction workers and the people that have been forced to live on less. We will all be in the Oval Office with Bernie Sanders. That’s the great thing about this campaign,” Moore said.

Moore also touched on the importance of reaching out to non-voters. The sense of despair that has spread in the country is taking a toll on the American people, causing people to disengage and not vote, according to Moore.

“We can and will live in a better world, but this won’t happen on its own. It has to be all of us to make this
happen,” said Moore.

Rep. Pocan (D-Wis.) endorsed the Sanders campaign earlier in the week and traveled to Iowa with a bus of 30 Wisconsin residents to knock doors. Pocan highlighted some of the central points of Sanders’ agenda, focusing on the need for an inclusive and fair government, one that works for everyone and not only the special interests and the well-connected. He also discussed the climate emergency, universal healthcare and improved wages and
workers’ rights.

“We need to stand up to politics as usual and be real about what the costs are if we don’t do that. If we can get that done, we will win. The last three years under Trump have been toxic to most of America. The antidote to Donald Trump is Bernie Sanders,” Pocan said.

About halfway through the town hall, Ocasio-Cortez was introduced on the stage to great audience enthusiasm. The New York congresswoman highlighted the importance of Iowa voters in what she referred to as a revolution that is about to take place in this country. She focused on the values the American people want to establish for the 21st century.

“An advanced society should guarantee health care to all people. It should acknowledge our responsibility to future generations. It should fight for human rights, both abroad and at our border,” Ocasio-Cortez said, discussing Sanders’ plan for universal health care. “We have to make it happen, and it requires a shift in our electoral politics. We are here to work on transformation.”

In response to those who view Sanders’ plan as too ambitious, Ocasio-Cortez said that prioritization is key.

“People say that certain things are impossible, for example, when we talk about climate change or lowering insulin prices, yet at the same time authorize and pay for a Space Force, “she said. “This is not a question of feasibility, it’s a question of priorities.”

When the time for questions came, Ocasio-Cortez shared many of her own personal experiences with poverty and inequality in the United States. Larchwood, Iowa, resident Amber Hess brought up her current difficulties in paying for several medical bills, some of which have started to be forcefully taken out of her paycheck. When Hess began to cry, Ocasio-Cortez hugged her and discussed about her similar experiences with healthcare and lack of insurance.

“About 18 months ago, I was working as a bartender in New York City. I did not have insurance but needed to get a check-up. When I was finally able to save up my tips to get to a doctor, she told me I needed to get a blood test. And I sat there, crying because I could not afford to get a blood test. If everything was okay, that meant I couldn’t afford peace of mind. If everything was really bad, it meant I couldn’t afford to live,” Ocasio-Cortez said. “I am sorry this is happening to you, but we are trying to make a change.”

Ocasio-Cortez concluded the town hall with an appeal to all voters as the Iowa caucus approaches.

“This movement is about joining across all lines of identity, geography, income, to make sure that we establish a more just nation and a more advanced society for the 21st century,” she said.