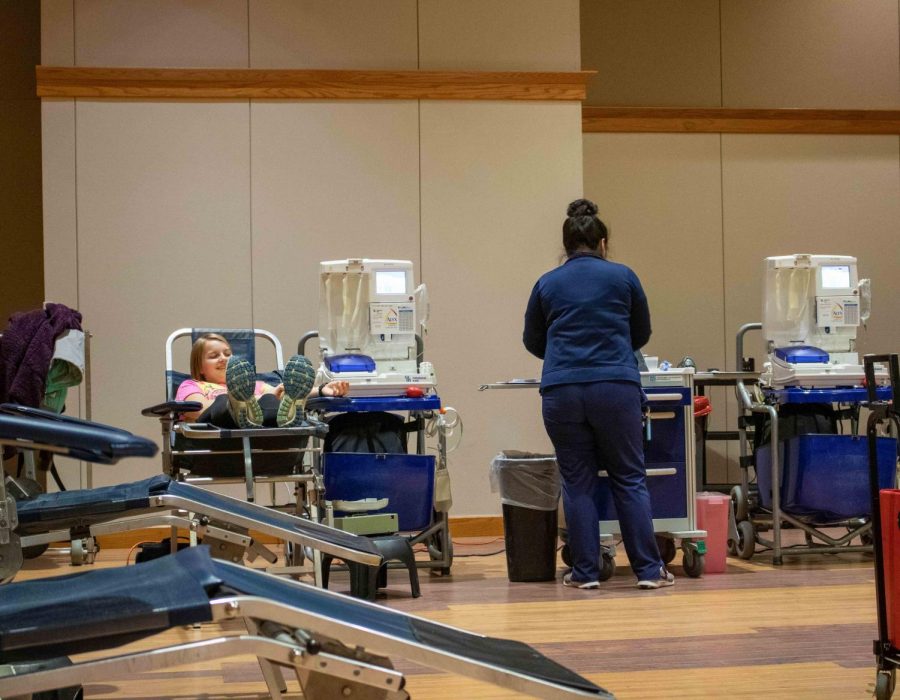 On Tuesday, Feb. 4, UNI students stopped by the Old Central Ballroom in Maucker Union to donate blood for the LifeServe Blood Center spring blood drive. The event was a collaboration between the Nonprofit Leadership Alliance (NCA) and the Office of Community Engagement.

UNI students had many reasons that they decided to donate blood. While some had donated previously, for others it was their first time doing so.

“In high school they had blood drives, but I never did them,” said freshman math education major Cassidy Bohr. “I decided to do it today as a new experience.”

Senior health sciences major Cassidy Utesch decided to donate because of the need for her specific blood type. She got a text saying that they needed her O+ blood, and she made it her goal to donate as much blood as she could due to the shortage. This was her first time donating blood since she had done so in high school.

Cedar Falls site supervisor Marena Williams wanted to emphasize the importance of donating blood at these events. She said that she tries to educate people by telling them that each blood donation saves three lives.

“Not a lot of people donate, so it’s kind of crucial in the winter months,” said Williams. “This is especially true with O- blood. We want to get students involved, so that’s why we went to UNI.”

Williams says that this blood drive started around three to four years ago. She enjoys it because it gives her the opportunity to see changes on-campus while getting students involved.

According to territory representative Kathie Gayther, LifeBlood Service Center is a mobile blood drive that works with individuals, community/educational organizations and churches to host blood drives that help local hospitals. LifeBlood Service Center exclusively draws blood in locations where they’re the only ones donating to hospitals and clinics.

In regard to the blood types that are donated, Williams described O- blood as the universal blood donor. She explained that when someone goes to the hospital in need of blood and they don’t know what blood type is needed, O- is the kind that one is most likely to receive. She said that a lot of the population has O+ blood, but the other types include A-, A+, B-, B+, AB- and AB+.

Gayther wanted to let students know the significance of donating blood to their local blood drives.

“Student demographics also drive the decision to host a college blood drive,” said Gayther. “The donor population is aging out.  We must encourage and recruit younger donors.  If we do not actively pursue this demographic, we will likely have a blood crisis by the year 2050.  Students, especially student athletes, are great donors.  Student donors have not reached an age where medications, and health ailments restrict them from donating. They are health-conscious and many work out, which can increase vein size and stability.”