A tale of two English professors 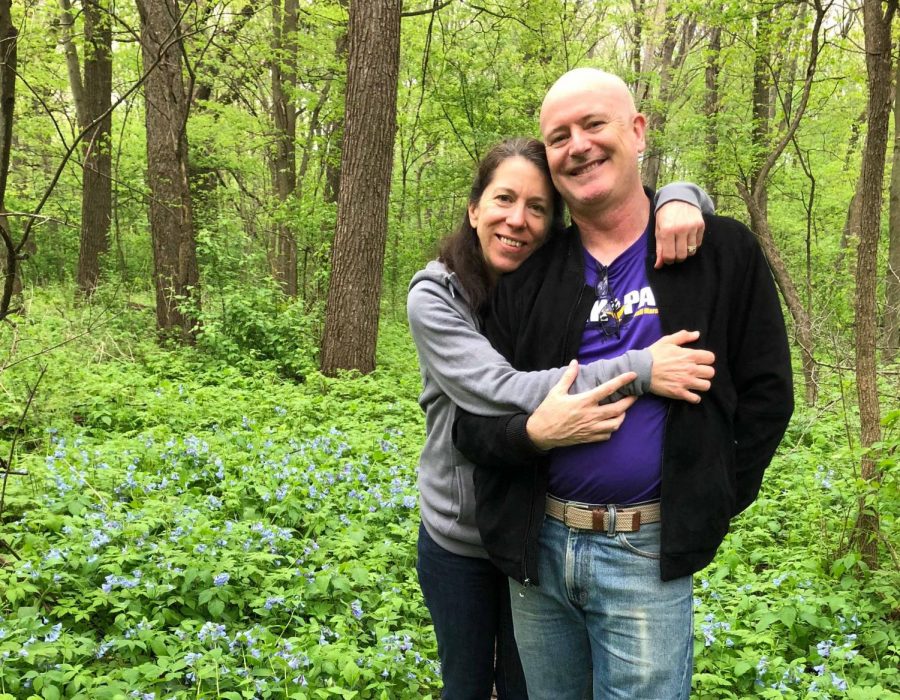 Husband-and-wife duo Jim O’Loughlin and Julie Husband have both been teaching at UNI since 2000. In honor of Valentine’s Day, the couple shared their story with staff writer Sofia Legaspi.

A romance that began in an East Coast graduate school continues 27 years later at the University of Northern Iowa.

UNI English Professors Jim O’Loughlin and Julie Husband met as doctoral students at the State University of New York (SUNY) at Buffalo in September 1992. In those days before PDFs and online readings, the couple’s first meeting took place in a reserve reading room.

“Julie always did all of the required reading, even then,” O’Loughlin said. “[Her] intelligence and warmth were what first drew me to her and still do today.”

The class that brought them together centered around the Civil War, an ironic inception for their budding love story, Husband said.

“Jim said very smart things in class, connecting books to cultural or political issues of the day, with implications for the present,” Husband said. “I looked forward to talking during breaks. He also had these fabulous blue eyes and a kind way of interacting with people. He was a big hit with my young nephews, when they met him later, because he had a million games to play,” she said.

They started dating the next semester. The couple and their tight-knight cohort — which still keeps in touch and beget half a dozen couples, O’Loughlin said — collaborated on several projects, including a digest of American literature journal articles and an intramural soccer team.

During their time in school, Husband worked as a writer in the President’s Office while O’Loughlin served as the president of the Graduate Student Association during a work action against the university. Husband called it “a testament to our resilience as a couple.”

In June 1996, they were married. They left their East Coast roots — O’Loughlin is originally from Connecticut, Husband from New York — and found themselves at UNI, where they began teaching in the fall of 2000.

“We cast our fortunes to the wind when looking for academic jobs and were lucky enough to wind up at a place like UNI, where we’ve been very happy,” O’Loughlin said.

Few people enjoy the privilege of learning and working alongside their partner, but O’Loughlin and Husband have done so for over two decades now.

“We are fortunate in being able to spend more time together than most working couples, and we’ve co-written a book together,” O’Loughlin said. “It’s also nice to talk about work with someone who can understand the ins and outs of one’s daily experience.”

First published in 2004 with a recently published second edition, the couple’s book is titled “Daily Life in the Industrial United States: 1870-1900.”

“We got to share new insights and dilemmas as we wrote each section,” Husband said. “It was common to cook together and have conversations starting with something like, ‘Did you know that there was a transition around 1890 from natural history displays to laboratories in university science departments?’”

Beyond academic and professional achievements, the pair regards their three children to be their greatest accomplishment together. Their oldest, Nic, graduates from college this year while their second child Devin will be graduating from high school. Their youngest, Ian, will be entering the ninth grade.

“They are great kids and we are lucky to have them,” O’Loughlin said. “Nothing has been more transformational than having and raising kids.”

For Husband, one high point of their marriage was a five-week camping trip across Colorado, Utah, California and Wyoming with their children, aged 11, 7 and 3 at the time.

“At every new campground I’d take the kids for an initial hike and Jim would set up camp,” she said. “Then we would sit around the fire, tell him what we saw and make a plan for the next day. The world seemed both very big and very wonderful.”

A couple with three children and nearly 24 years of marriage under their belts might be assumed to possess the great secret to cultivating a lasting relationship; however, they conceded there is no singular formula for success.

“Every relationship is different, and I don’t think what works for one couple will necessarily work for another,” O’Loughlin said. “But I do think that in any long-term relationship, people are going to grow and change, and to the extent that you can do that together — sharing new interests and hobbies as you can — you are better off.”