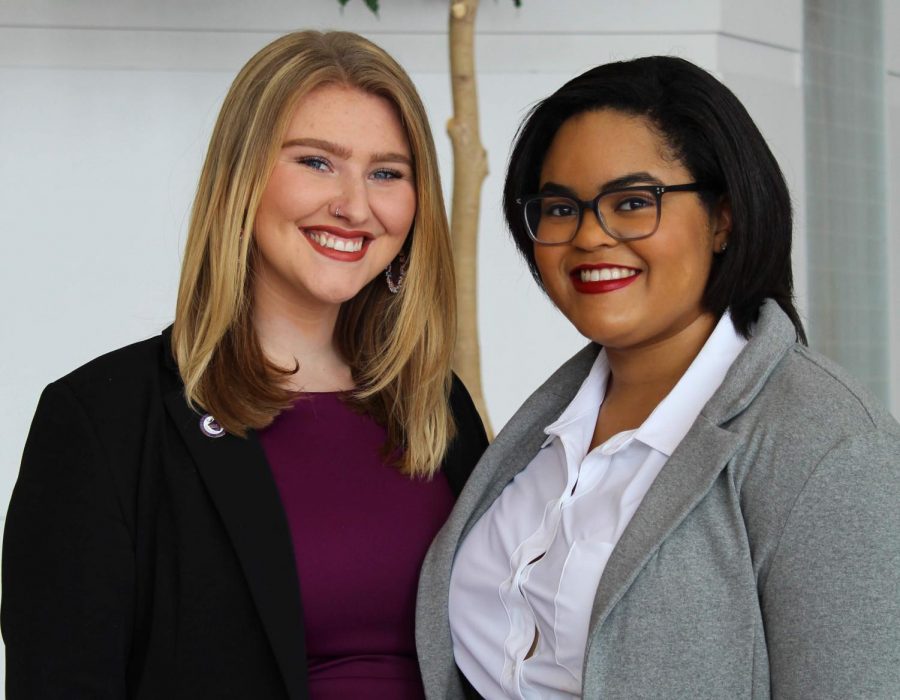 Elle Boeding and Rachel Greene are running for student body president and vice president, respectively, for one reason: “For the Students.”

“We’re really here for the students. It sounds corny because it’s our slogan, but at the core of it all, I want to make sure that we can listen and learn and improve our candidacy as well as have a good free-flowing set of ideas,” said Boeding, a junior political communication and philosophy major with minors in sexuality, women and gender studies and politics and law.

Boeding and Greene announced their candidacy on Monday, Feb. 10, via their website, www.elleandrachel.com/, and social media platforms.

“I’ve been raised that if you are willing and able to take responsibility to lead, do it,” said Greene, a junior economics major with a minor in professional
writing.

Both she and Boeding have already taken on a variety of leadership roles on the UNI campus, which they said prepared them for the positions they are currently seeking.

Boeding was elected as an NISG senator for the College of Humanities, Arts and Sciences (CHAS) in spring 2018. She now serves on multiple NISG committees, including Campus Relations, Government and Legislative Affairs, External Relations and Recruitment. She also advocates for UNI on Iowa’s Capitol Hill as a member of Legislative Liaison Team (LLT).

“As a senator, I’ve gotten the opportunity to advocate on behalf of students very directly to university administration,” Boeding said. “That’s something that felt very daunting to me at first, but […] these are individuals that should be accountable to us. I think that’s something I have grown to be very
comfortable with.”

Her time as a Resident Assistant (RA) and member of Student Admissions Ambassadors (SAA) has also imparted in her a “deep care” for UNI and its students.

“Being an RA has really brought to my attention that there’s a lot of students out there who are struggling that we may never know,” she said. “My residents will tell you that first and foremost, I love them. […] I take ownership of how they’re feeling and how they’re doing and that’s something that I hope would translate well into the student body president role, that care and that love that I have for the students that I work with.”

Like Boeding, Greene is also a member of SAA and LLT, and she has also served as a Peer Mentor and WRC fitness instructor. She said her range of involvement will allow her to connect with, and advocate for, diverse groups on campus.

“It balances it out so that we’re not just super saturated with one type of experience,” she said. “We cover a lot more bases.”

“Rachel is a continuous advocate for the people around her, regardless of if they share the same identities as her or not,” Boeding added. “It makes me really excited to be running with someone like her.”

That advocacy will come in handy for the three main prongs of the pair’s platform — Advocacy, Access and Academics.

Under the first prong, Advocacy, Boeding and Greene hope to work closely with Diversity, Inclusion and Social Justice (DIS) services on campus to advocate for marginalized populations such as students of color and LGBTQ+ students.

“As a woman of color on this campus, it’s not easy to be taken seriously at times,” Greene said.

She said that, if elected, she and Boeding would work to establish training for staff to recognize and eliminate microaggressions in the classroom, as well as adding pronouns, pronunciations and chosen names to all class rosters to “eliminate that level of embarrassment.”

“We want to make sure that we value all UNI students to be students,” she said.

In terms of Access, Boeding said the pair’s platform includes a focus on mental health and sexual assault support resources.

“Currently, we have no [sexual assault awareness] training for mandatory reporters, whether that be faculty, staff [or] RAs,” Boeding said.

She said that she and Greene, if elected, hope to implement such a training. Their platform also emphasizes increasing student awareness of the resources available through the UNI Counseling Center and the mental health excuse notes program established by current president and vice president Jacob Levang and Jacob Stites.

Finally, addressing the third prong of the platform, Academics, Greene emphasized the importance of extending the campus academic community to include off-campus students such as those at the UNI-CUE in Waterloo and on the Des Moines Area Community College (DMACC) campus.

“We’re creating a greater campus community, and that doesn’t just mean the zip code of 50613 in Cedar Falls,” she said. “If you are a full time, part-time, grad student, whatever, you’re a student and your voice matters.”

Boeding emphasized the representation that their platform brings, with two women and Greene as a woman of color.

“This is something that I never thought I could do,” Boeding said. “It’s been very rare that we’ve seen women in these leadership roles within NISG. Just a few years ago, there were hardly any women in NISG.”

Although NISG has had female presidents in the past, if elected, Greene will be the first female of color to serve as NISG president or vice president. However, she said that potential to make history isn’t uppermost in her mind.

NISG elections will be held Feb. 25-26, when students will have the opportunity to vote in MyUNIverse for presidential/vice presidential and senatorial candidates. Boeding and Greene are currently running unopposed, after competing ticket Kristin Rasmussen and Triet Ngo announced Wednesday morning that they were suspending their campaign.

“We value education, mental health, and an enjoyable time here at the University of Northern Iowa,” Rasmussen wrote on the campaign’s Facebook page.  “I have personally found out that running for this position was a larger order than I could undertake, and has caused unforeseen mental health issues that I need to prioritize as well as my academics. We are grateful to those who have helped us start this journey, and while we will no longer be running for a special position, we will continue to be advocates for students and continuing the conversation about student representation and transparency in Student Government.”

Any students interested in joining the presidential race have until 6 p.m. Friday, Feb. 14 to submit a completed petition packet with 100 signatures to the NISG office. For more information about NISG elections and how to vote or run, visit nisg.uni.edu/nisg-elections.