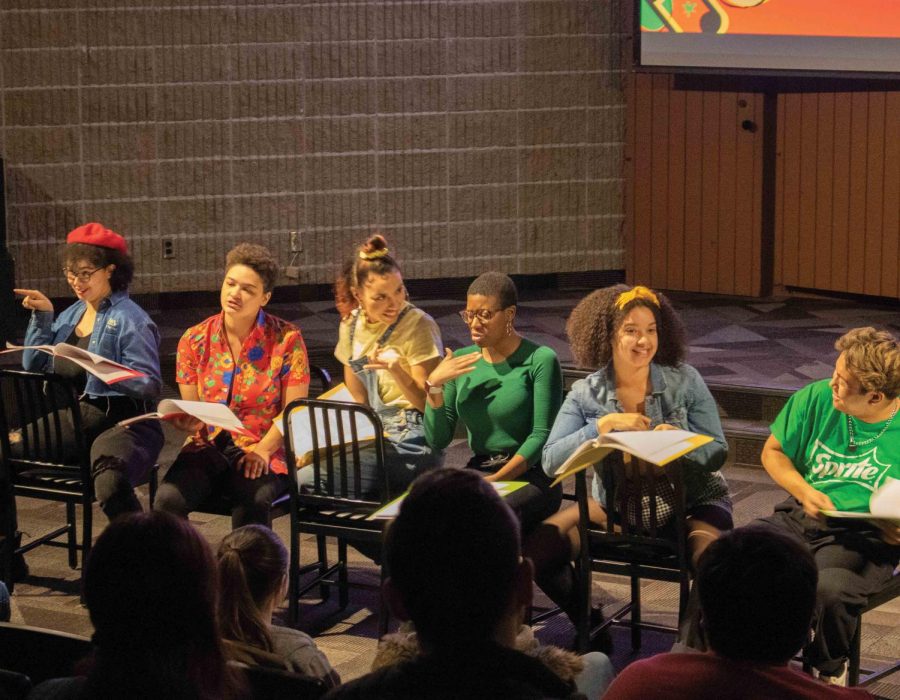 On Saturday, Feb. 15 at 7 p.m., the UNI Multicultural Theatrical Society presented “Black History: A Musical Journey” at the Communication Arts Center. This one-night-only program in honor of Black History Month served as a celebration of black musical artists throughout American history and showcased the talented voices of current UNI students.

Black History Month is an opportunity to appreciate and remember the activists, revolutionaries, and cultural icons of the black community —a nd the Multicultural Theatrical Society delivered.

The program featured live musical performances that highlighted the accomplishments of black artists and how they shaped American music, from the origin of blues to modern pop and Broadway hits. These songs were performed alongside a narrative history of significant artists and how they have shaped genres over time.

The audience was entirely invested in the program throughout and reciprocated the energy and intimate familiarity of the six performers, sharing in their pride and laughing along with the lighthearted aspects of the show.

However, the triumphs of black artists are often preceded by oppression, ignorance and struggle, and the stories that the performers shared effectively conveyed the darker narrative that accompanies the successes of these artists.

The program started off in the 1950s — when blues music began to meet rock and roll — and progressed chronologically through the history of music.

Even “House of the Rising Sun,” popularized by The Animals, was originally written by black artists. Ever heard of Louis Jordan or Wynonie Harris? Well, if you haven’t, you’re not alone. Most of the audience who attended Saturday night didn’t either.

To recognize the contributions of Jordan and Harris and to provide context to the style of blues music, Zoella Sneed, a junior theatre performance major, sang a hauntingly beautiful interpretation of the rock standard.

Caroline Henry’s smooth and soulful rendition of Etta James’ “My Funny Valentine” exemplified the fusion of rock and soul music. Soon after, Devin Yarkosky, a senior  theatre performance major, performed “Tyrone,” an R&B classic by Eryka Badu that made the audience boisterous and lively.

The performers all chose to share a few details about a specific artist who has had a significant impact on their lives or has been a musical inspiration for them. The artists ranged from Lizzo to Tyler the Creator and the stories they shared were both personal and moving.

Ray Nelson, a sophomore theatre performance major, and Keira Doyle, a junior elementary education major and theatre minor, showcased the genre-bending work of Tyler the Creator in his song, “See You Again.”

Towards the end of the night, to celebrate the progress made in the musical theatre world, the six performers came together to sing an incredible rendition of  “I Know Where I’ve Been” from the Broadway musical Hairspray. This song selection was entirely fitting and powerful after sharing with the audience the history of influential black artists and how they transformed the music world.

“I am so proud that we could lift up the voices of these artists that have shaped the world for us as people of color to live in. TheatreUNI is and always has been our number one supporter, and we couldn’t amplify our voices in this way without the theatre department,” Zoella Sneed, publicist for the Multicultural Theatrical Society, said.

To conclude the evening, the six performers and their contagious enthusiasm had the audience up on their feet and singing along to Gloria Gaynor’s “I Will Survive” as audience members headed home with smiles on their faces and a greater appreciation for black influence on American music.