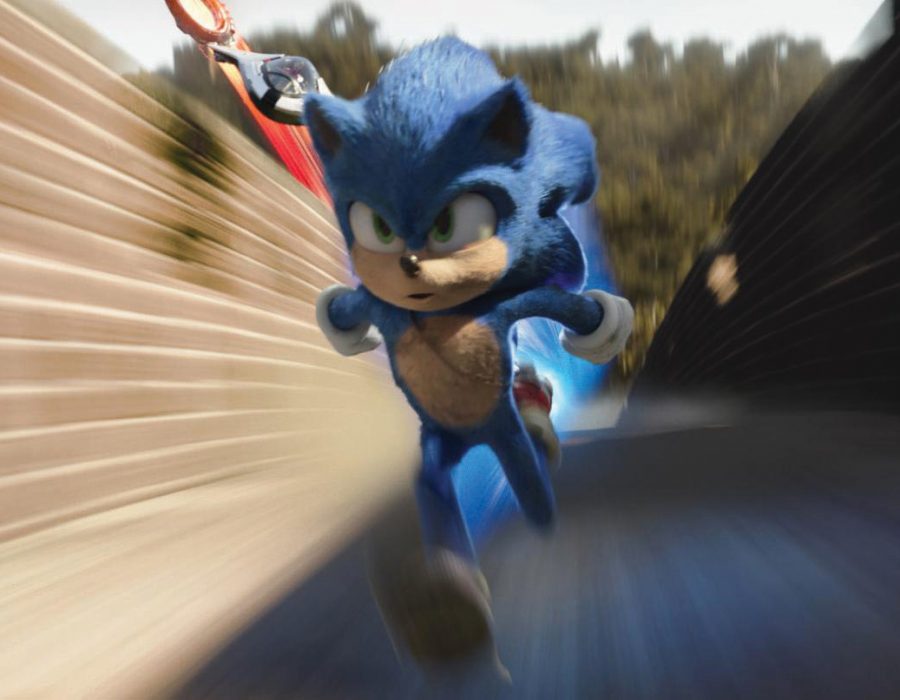 Sonic, voiced by Ben Schwartz, in "Sonic the Hedgehog ." [Paramount Pictures/Sega of America]

It’s been almost a year now since we were exposed to the horror that came with the first trailer for “Sonic the Hedgehog.” The blue furball we loved as a kid was turned into a monster with human teeth, small eyes and freakishly long legs. After the overwhelmingly negative reactions, Paramount Pictures announced they would be delaying the movie and taking time to redesign Sonic to better fit his classic video game look. Now in February 2020, “Sonic the Hedgehog’’ has been released with improved visual effects.

The story takes place in the small town of Green Hills, Mont. Sonic is living his best life there as he causes mischief for the residents and partakes in other fun activities. On one night, Sonic’s actions get the better of him and he attracts the attention of the U.S. Government, who hires the insane Dr. Robotnik to track him down. Needing to go on the run, Sonic recruits the help of local police officer Tom Wachowski. The two set out on the road, getting into hijinks along the way.

Directed by Jeff Fowler, “Sonic the Hedgehog” doesn’t have enough originality to warrant its existence as a movie. The structure of the story is eerily similar to “E.T. the Extra-Terrestrial” as an alien creature gets stuck on our planet and must rely on an unassuming human to help him return to his homeworld. The only difference here is that after the initial setup, the story turns into a bit of a buddy road trip movie. But the road trip structure here also apes other computer-effect character movies such as “Looney Tunes: Back in Action” and “The Adventures of Rocky and Bullwinkle.”

Fowler does impress slightly as two moments pop up that make for great fun, which are the moments where time slows down to account for Sonic’s super speed. It’s a nice comedic bit that shows off Sonic’s powers, even if it plays almost shot for shot the same as Quicksilver’s scene from “X-Men: Days of Future Past.”

It’s also important to point out that the decision by Paramount to redesign Sonic turned out to be the right move. The new look is very well done and is more appropriate to the character.

While also being a ripoff of “E.T.,” the script for “Sonic the Hedgehog” also takes a few too many ideas from the playbook of other kids’ movies, most notably the self-referential humor found in “The Lego Movie” and its sequel. But while the Lego movies were able to catch lightning in a bottle, Sonic’s attempt is impeded by a less than talented committee of writers.

The producers must have needed money to fund the character redesign as it seems they sold off some of their jokes to corporate entities. Many recurring gags surround Amazon, Uber, Zillow and Olive Garden. None of these jokes land and only get more shallow as the movie goes on.

There are also quite a few pandering pop-culture references to the likes of Keanu Reeves and the floss dance. Yes, Sonic flosses in this movie not once but on two separate occasions.

Ben Schwartz voices the titular blue speedster. For better and worse, Schwartz is the definitive voice of the character, supplying a sly, sarcastic tone. He can be quite grating at times but it’s also not entirely his fault due to the poor material he’s been given.

James Marsden as Tom Wachowski fares the best out of the human characters. His performance solely consists of him reacting to his furry sidekick’s antics. You can tell that Marsden isn’t interacting with a real object, making for some awkward scenes.

Lastly, generational talent Jim Carrey plays the oddball villain, Dr. Robotnik. Carrey falls onto his usual schtick of thinking that high energy equals great comedy. He’s begging you to like him as he bounces around in a similar fashion to his earlier roles.

What’s ironic is that the best part of the movie, the visual effects, used to be the worst part. If only Paramount had decided to redesign the whole movie and turn it into something worthwhile instead of this needless cash grab.