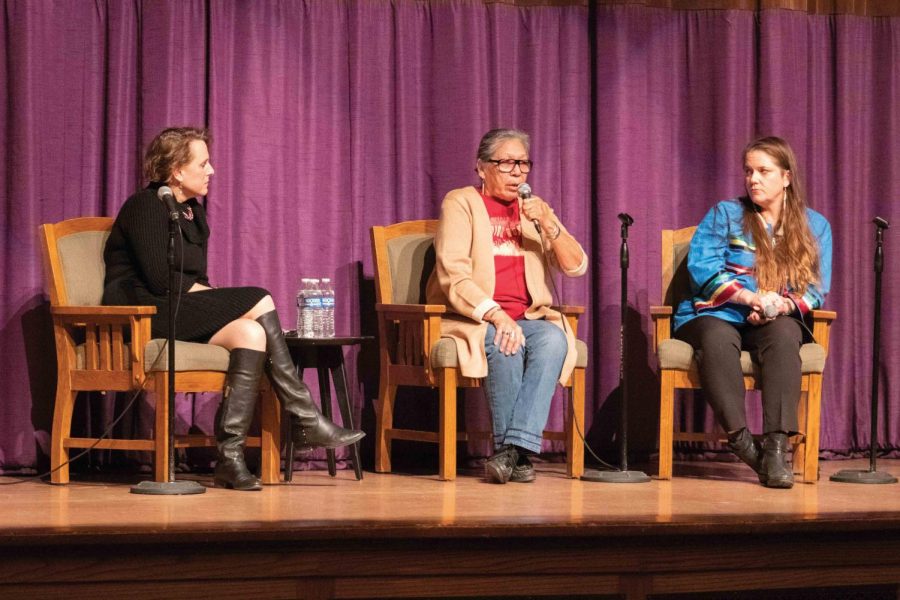 On Monday, Feb. 24 at 6:30 p.m., the documentary “Warrior Women” was screened in Lang Hall Auditorium as a kickoff for Women’s History Month.

Before starting the film, director Elizabeth Castle spoke about her inspiration. “I wanted to learn how these women […] who had no political power […] managed to change the world,” Castle said.

In its 62 minute run time, the documentary’s focus spanned decades and touched on many of the issues faced by Native Americans across the country. The figure tying them together was Madonna Thunder Hawk, a leader of the American Indian Movement (AIM). AIM began in the late 1960s in response to police brutality and it quickly became Thunder Hawk’s home. She joined other activists in the occupations of Mt. Rushmore, Alcatraz Island and Wounded Knee with the resolve to “drop and everything and go if [she felt] it’s important enough.”

Although many of her contemporaries have passed on, Thunder Hawk represents them through the issues and battles of today, including Standing Rock and human trafficking. The film’s overall theme was one of survival, as Thunder Hawk and her family were fighting large scale social destruction and the loss of their freedom. The movement is based on their commitment to keep their culture alive and rebuild the relationships that have been hurt by the actions of the US Government.

A question and answer session followed the film and was opened by the graduate students who applied for the grant to bring Thunder Hawk and Castle to UNI.

The first question, directed to Castle, concerned the circular narrative the film employs rather than a linear story. Castle said that she “wanted it to be an experience” which would capture how Thunder Hawk “carries the history” of the movement. The documentary jumps across the timeline of Thunder Hawk’s activism with archival footage of her reservation and her involvement in historical events to modern day discussions about the impact those moments had on their fight for freedom.

Thunder Hawk explained the struggles she faced from her own people. Tribal governments wanted her to “sit back and be quiet.” Rather than confronting them head on, she went around them with the support of her people. She laughed when remembering how she had been “mostly supported by the young, the old and the have-nots.”

Thunder Hawk also discussed that she did not face additional challenges from the men in her community because the respect of women remained an integral part of her culture. She said that their activism could not be split by gender roles because it was their shared responsibility as a people to tackle the issues they were facing.

Thunder Hawk believes the focus of the next front will be support. As a grandmother, she said that she feels it is time for the younger generation to make their stand and lead the charge. Thunder Hawk said she is honored to be an elder for them and offer guidance for their journey. Still, she maintains an active role in raising awareness, particularly about the issues of human trafficking and the Social Services.

Indigenous women and children have been disappearing and Thunder Hawk worries about the dangers brought by the construction of the pipeline as the trailer camps are close to reservation borders. Veterans from Standing Rock have kept in touch with many leaders and have been hosting self defense training.

Thunder Hawk also said that she wants to see an end to the actions of Social Services that place indigenous children in foster homes. She and other leaders have been working with the organization Simply Smiles to build children villages to provide at-risk children the support they need on the reservation.

The final question addressed Castle’s interest in following Thunder Hawk’s life’s work. Castle said she felt like she had “found something that can stay alive in [her] heart” and that she was “overwhelmed to see [her] thesis come alive.” Castle said that Thunder Hawk’s never-ending fight for justice was an inspiring story that needed to be told.

As for why Thunder Hawk agreed to work with Castle, she said that “it was amazing to find somebody real” after years of being dismissed by the press. Rather than looking at Thunder Hawk as a subject, Castle feels that they “create things together” and that makes the biggest difference.

More information about their movement can be found at warriorwomen.org. Both Thunder Hawk and Castle called the audience to support local initiatives as well, because they believe it only takes something small to begin to make a change.