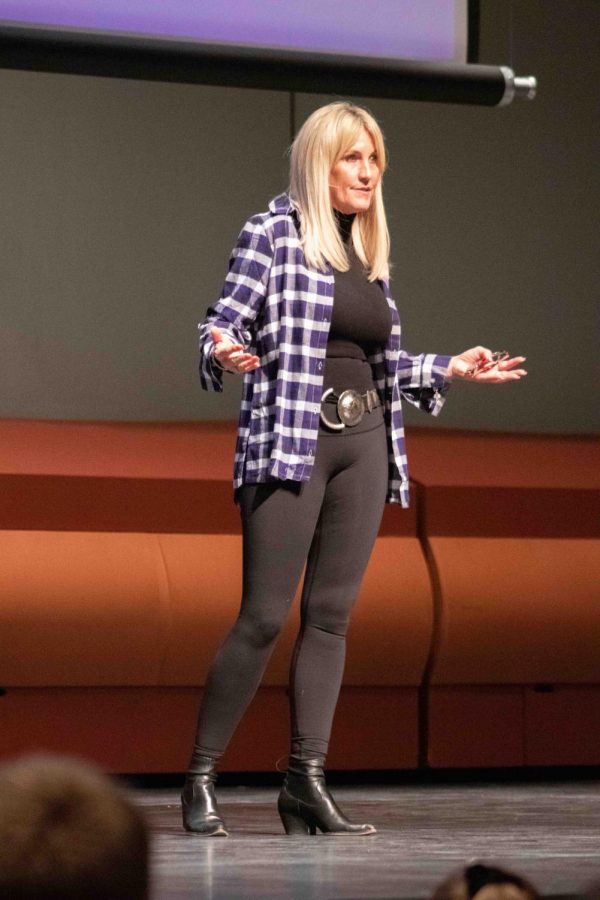 Environmental activist and advocate Erin Brockovich delievered the final Leopold Lecture of the school year, “The Power of One, on Feb. 25.

When she was growing up in Kansas, Erin Brockovich had two women that inspired her. The firs was her mother, who taught her the value of what Brockovich called “stick-to-it-iveness.”

Her second inspiration was her teacher, who let her take tests orally when she found out that Brockovich had dyslexia. Through this action, Brockovich was able to believe in herself.

These values have stuck with Brockovich and given her the tenacity to fight against climate change.

As part of the Aldo Leopold Lecture Series, Brockovich presented her lecture titled “The Power of One” on Feb. 25, 2020, at the Gallagher Bluedorn Performing Arts Center.

Before Brockovich gave her speech, UNI President Mark Nook and sophomore actuarial science major Samantha Bennett provided introductions to the lecture’s history and what Brockovich had done in her case against the Pacific Gas Company.

During the presentation, Brockovich described her exhaustive investigation into the poisoning of the water in Hinkley, California.

“I can’t believe it’s been 29 years since my work in that small desert town,” Brockovich said. “I’m deeply sad that at the time I thought it was a one-off, if you will. It was only a microcosm of something that was happening in the entire United States, if not the world. I had absolutely no idea what I was about to uncover or the tragedy that I continue to discover is happening to the environment.”

Despite her fears, Brockovich mentioned that she still maintains a sense of optimism. Although many people see the issues of pollution and climate change as out of their control, she has seen the struggles of everyday folk that are fighting for environmental issues. She’s seen people that do similar work in China and Kenya who brought up food contamination and allergies to their local governments.

Brockovich wanted to get across the message of environmental change being in the hands of the people.

“The number one thing that people seem to want when I go to towns is some kind of permission,” said Brockovich. “Empowerment is a process that happens when we give ourselves that permission to believe in ourselves. Oftentimes we get stuck and we’re afraid to do that. I encourage you to be the hero that exists right inside of you.”

When Brockovich examined a map that looked at water contamination issues, she found a connection between toxic substances in the water and cancer rates. Throughout the lecture, Brockovich encouraged people to examine environmental issues and unite towards a common goal of changing policies. She said that not every chemical that enters  the marketplace is thoroughly tested for its health and environmental effects.

“We have to change that policy,” said Brockovich. “These chemicals, I want to know what they do in the environment before you put them into the marketplace and we become the guinea pig. Students are so eager to look at these things. We are inherently great; the problem is that we haven’t been solution-driven. We have every means to change antiquated systems, policies and ideas.”

Throughout her time working on the case in Hinkley, Calif., Brockovich was bullied and ridiculed for not being a lawyer or scientist. Despite these criticisms, she wanted to let the audience know that being different doesn’t mean that you can’t make a difference. She encouraged everyone to stay informed while using a combination of logic, leverage, loyalty and love to get things done.

Brockovich recognized that climate change is here, but there’s something that we can do about it.

“We all see it,” said Brockovich. “It’s weather patterns, it’s water, it’s the environment and the culture. The shift is here. But if we come back here and know who we are, I’m telling you, we’ll find our way back. I think that we’ll be absolutely fine, and we’ll be better than ever.”