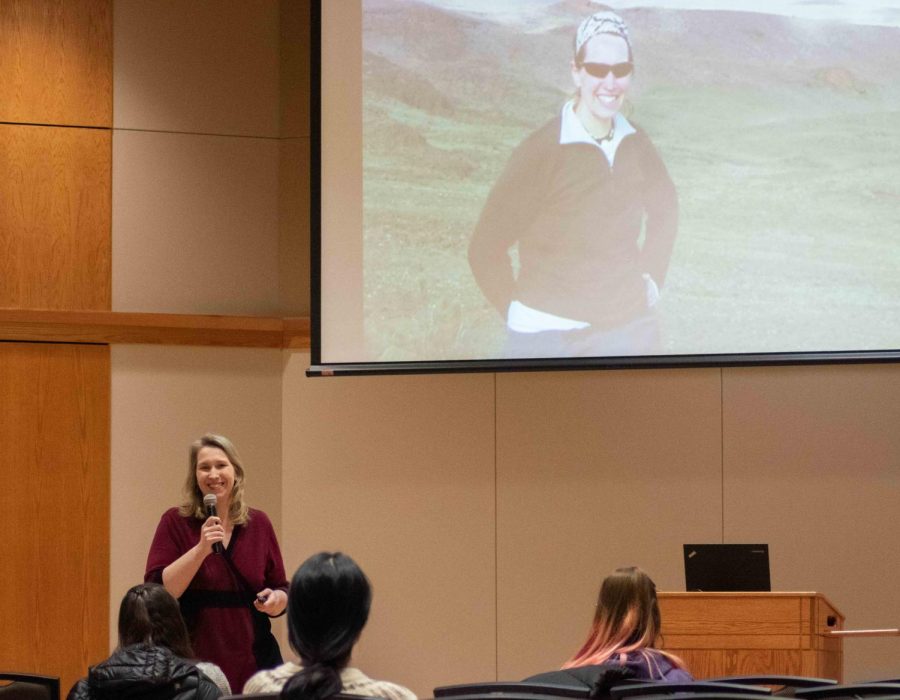 On Tuesday, Feb. 25, in the Old Central Ballroom in Maucker Union, author Kara Whitely gave a presentation on binge eating. Whitely, who has written two books, shared her struggles with binge eating disorder and how she persevered and climbed Mount Kilimanjaro three times.

The presentation was a part of Eating Disorder Awareness Week. Whitely visited the University of Iowa and Iowa State University along with UNI.

According to Whitely, binge eating is the most common eating disorder in America, yet it is the least talked about. She said more Americans suffer from binge eating than anorexia and bulimia combined.

Whitely shared her personal experiences with binge eating, which began when she was nine years old as a way to cope with her parents’ fighting and eventual divorce.

“It wasn’t like those stereotypical pictures of a person with piles of hamburgers,” she said. “It was things like walnuts. The sound of chewing drowned out the sounds of the screaming. It drowned out that feeling that my body was going to drop out.”

Whitely explained that binge eating is not necessarily about food itself, but rather a coping mechanism for a bigger problem. She suffered from anxiety and depression and was also sexually assaulted at the age of 12. Food helped Whitley through every painful experience of her life, and instead of dealing with the problems and finding positive coping mechanisms, she turned to food.

Whitley said that she was waiting for happiness to just come to her, but after years of it never arriving, she decided to go out and find it. She started hiking small trails in Vermont and slowly moved her way up to larger and tougher trails. Hiking offered a new coping mechanism and also helped her lose weight.

She eventually made her way up to Camel’s Peak, which is the second highest peak in Vermont. Yet even though she was making progress, Whitely felt like there was something missing from her journey. So she set herself an end goal: to climb Mount Kilimanjaro.

Through perseverance, dedication and a lot of hard work, Whitley climbed the mountain. Not only did she successfully complete her goal, but she ended up climbing it three times. Whitley wanted to share her stories of success with others, to let them know they’re not alone and they too can overcome binge eating and other struggles they face. She has two books, “Gorge: My Journey Up Kilimanjaro at 300 Pounds” and “The Weight of Being: How I Satisfied My Hunger for Happiness.”

“Gorge” is currently being made into a movie by Amazon and will star “This is Us” actress Chrissy Metz. It will begin filming next year and most likely go into production the following year.

Reagan Brown, a senior communication major with  marketing and entrepreneurship minors, attended the presentation and loved it.

“I’ve been working with the student health clinic here at campus to overcome my struggles with binge eating disorder,” Brown said. “I think it’s really cool how much she’s been able to overcome and I feel like it’s something I really needed to hear. It’s nice to hear about people who have some of the same struggles as me.”