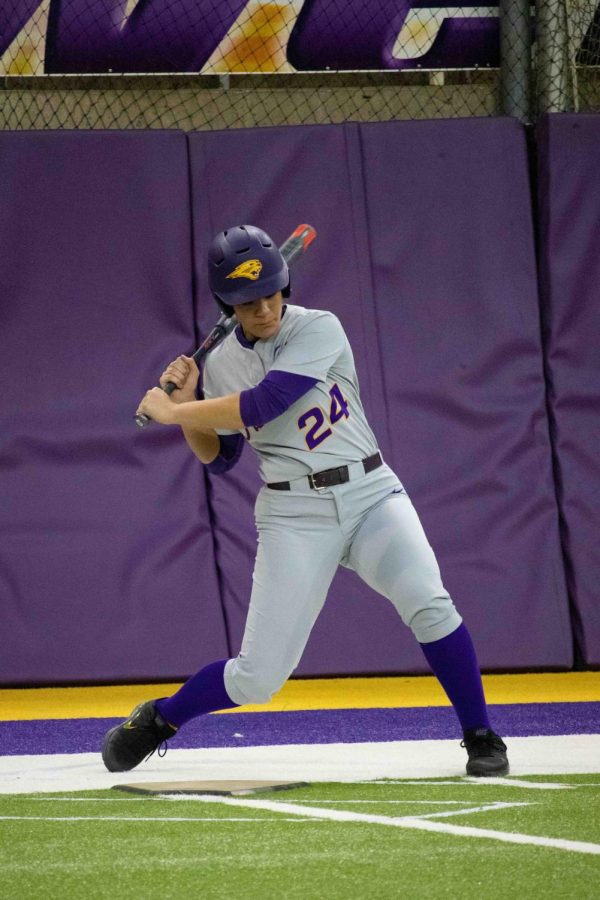 This past weekend, The UNI Panthers softball team made the trip out to Greely, Co., for a weekend of competition, playing five games.

On day one of the tournament, the Purple and Gold started out the weekend facing off with Nebraska-Omaha. The Panthers started off the game fast in the top of the first inning, with Hannah Kelley picking up a double, followed by Adara Opiola getting hit by a pitch to put runners on first and second with just one out in the inning. Ashley Chesser came through with a double of her own, bringing in Hannah Kelley to take the 1-0 lead, before transitioning to defense.

Jaclyn Spencer stepped in the circle for the start of the game and grabbed a strikeout in the game. However, Nebraska-Omaha compiled six runs over five innings and held the UNI offense to just one run in game one.

On day two of the tournament, UNI started off the day playing the host, Northern Colorado. The Panthers were behind by three runs in the fourth inning before Adara Opiola hit a solo homerun to bring the score to 3-1. Northern Colorado was able to get one more run in to drive the score to 4-1, but a late seventh inning rally gave the Panthers the 4-2 loss as Ashley Chesser hit a solo homerun to close out the game.

The fifth and final game of the weekend had UNI against Utah Valley in a rematch on Sunday morning. The Panthers were able to hold off any sort of offensive attack from the Wolverines as their only run would come in the seventh inning of play. Northern Iowa would get one run in the third off of a Sammey Bunch solo home run and three more in the fifth, coming from a Adara Opiola two-run homer and a run scored off of a Utah Valley error. The Panthers would close out the final game of the weekend with a 4-1 victory.

The Panther women will travel to Evansville for a weekend series against the Purple Aces from March 14-15 for their next slate of games. They now sit at 7-14 overall on the season.