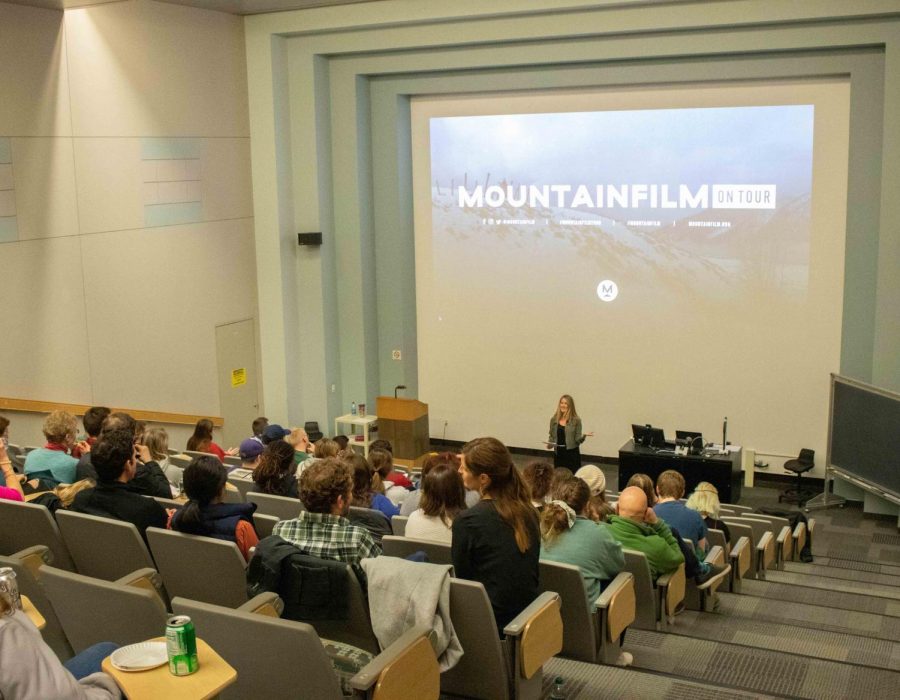 Mountainfilm on Tour stopped at UNI on Friday evening, March 6 in the Kamerick Art Building.

Celebrating its 41st year, the annual festival based in Telluride, Colo., is one of the longest-running film festivals in the United States, according to its website.

“We are way more than just a documentary film festival,” said Kristen Milord, a Mountainfilm representative who emceed Friday’s event. “We are a five-day, six-theater festival where artists, athletes and authors all come together — and activists as well — come together to share stories and ideas to make this world a better place, which is part of our mission statement.”

Short films from the festival are selected to tour over 200 locations on six different continents.

Some of the films were notable for their stunning visuals, such as Scott Secco’s “Perspectives: India featuring Micayla Gatto,” taking viewers on a journey through Indian landscape and culture through the eyes of a mountain-biker. Another film titled “Cowboy” directed by Clayton Vila featured breathtaking shots of a daring snowboarder, eliciting gasps of awe from the audience.

Other films showcased were more narrative-heavy, such as Ben Knight and Travis Rummel’s “Life of Pie” documenting how partners Jen Zeuner and Anne Keller created a mountain biking community through their restaurant Hot Tomato Cafe. The film was a favorite of the evening for Laura Roman Jimenez, a senior finance and religion major who is involved with the Green Project.

“It just seemed like that was the kind of life you want to live,” she said. “Just surrounded by your loved ones, inspiring others, doing stuff outdoors, making food. Like, oh my gosh, that really is the dream.”

Audrey Buchanan’s “The Mystery of Now” told the story of Douglas Miles Sr. bringing revival to the San Carlos Reservation in Arizona through his organization Apache Skateboards. In “Detroit Hives,” a 2019 Mountainfilm Commitment Grant recipient, directors Palmer Morse and Rachel Weinberg follow the efforts of a Detroit, Mich., non-profit to counter urban blight by converting vacant lots into havens for honeybees.

The variety of topics addressed demonstrated how the festival has evolved since its inception in 1979, when all of the films screened shared one commonality: mountains.

“[Mountainfilm] started mostly as a climbing festival,” Milord said. “Over the years, it’s really grown to be one that shares the exceptional films showcasing not only the adventure or outdoors or climbing, but cultural, political and social justice issues as well.”

Still, the second-to-last film of the evening returned to Mountainfilm’s roots. The Taylor Keating and Cedar Wright-directed “Queen Maud Land” followed prominent climbers as they conquered daunting rock spires in remote Antarctica. Despite being the longest feature of the evening with a running time of nearly half an hour, audiences were captivated as athletes supported each other through extreme conditions.

For many audience members like Hannah Luce, Friday was their first time attending a Film Club event. Luce, a second-year student majoring in leisure, youth and human services, said she enjoyed each one of the films.

“I feel like they were all impactful in their completely unique ways,” she said. “Like the last film, ‘Danny Daycare,’ was just like a super fun way to inspire youth to partake in the outdoors, especially mountain-[biking]. And there’s also ‘Women in Fire’ and that was amazing to see the feminist attitudes in fire-fighting and stuff like that.”

Directed by Tim Kressin, “Women in Fire” featured several women proving themselves in the historically male-dominated field of firefighting. It ranked among the top films of the evening for several attendees, including Film Club Vice President Mariah Piipo.

Piipo, who is a senior majoring in math, art history and studio art, said she hoped those in attendance left with a greater appreciation for the artistry of film, as well as the beauty of nature, the environment and one’s surroundings.

“It felt like every movie had beautiful backdrops. Even though some of them took place — like one took place in Detroit, it was still beautiful. Just because of the way they looked at it: wide angles and just taking in everything at once,” she said. “It kinda makes you take that deep breath, and it’s just really beautiful. And I hope everyone can appreciate that in their day-to-day lives.”

“Just do what you wanna do […] that’s really what I got from it,” said Jacobo, a sophomore studying family services. “That’s all they were doing. They had this vision and they went for it, or they had this goal or common goal or really just didn’t have a goal — they were just living life and just really making the best of it.”

Mountainfilm takes place in Telluride, Colo., every Memorial Day weekend; information about the festival and tour stops can be found at mountainfilm.org. For those seeking more cinematic experiences on campus, Film Club hosts a weekly film screening and discussion in Kamerick 111 on Fridays at 7 p.m. Piipo also shared that club would be screening all 13 hours of the “Lord of the Rings” extended editions on Saturday, March 28.