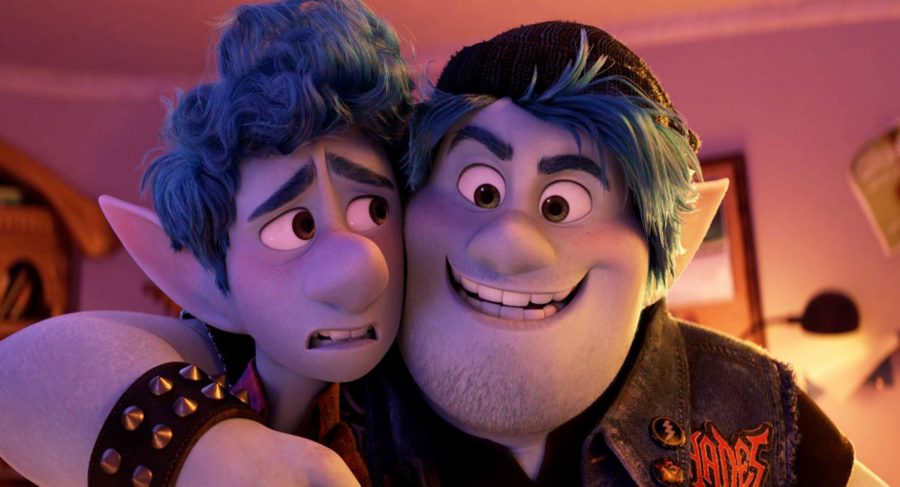 Set on an Earth where the magical and mythological exist together, Pixar’s newest animated film, “Onward,” tells the tale of two elven brothers.

The story begins on the 16th birthday of the younger brother, Ian Lightfoot, who never was able to meet his dad as he had died before Ian was born.

As a surprise gift for his now grown-up son, the father left a staff that, when combined with a spell, will bring him back to life for a full day. Unfortunately, the spell doesn’t go as intended and only reanimates the lower half of the father.

To bring back the other half, a rare gem must be acquired that is hidden deep within a mystical mountain. With only twenty-four hours available, Ian and his older brother, Barley, must set out on a quest to fulfill the spell and bring back their dad for one last moment of bonding.

“Onward” is directed by Dan Scanlon, a Pixar veteran and second time director who previously helmed “Monsters University.” Despite his best efforts, Scanlon still doesn’t seem to have the same directorial knack that many others before him have possessed.

Scanlon’s pacing of the film is both rushed and predictable, with the middle third being the most egregious example of this folly, as it re-hashes the same beats over and over again. The final third is able to pick things up a little but it too falls into the recent trend by Pixar to substitute light and noise for simple storytelling.

Fortunately, Scanlon’s supplementary material helps distract from his shortcomings. The animation is breathtaking as usual and the score by Mychael and Jeff Dana is wonderful as it balances both the epic and whimsical tone of the film.

Scanlon lends his hand to the script, which is also co-written by Jason Headley and Keith Bunin.

Similar to the directing, the writing in the first half does no favors as it rushes from location to location with nothing but the basic plot on its mind. A sense of emotional complexity that is usually found within Pixar’s narratives is sorely absent here.

But once the halfway mark hits, the film vastly improves as the emotional core of the story hits like a ton of bricks. The writing trio reminds you once again of the magic that Pixar wields as the earlier and underdeveloped themes of brotherhood and fatherhood are given new life in only a few short minutes.

As a sibling with a younger brother, the sentimentality of the story hit deep, leaving me in more of an emotional wreck than I was prepared for.

Like all Pixar films, the impeccable voice work among the cast works hand-in-hand with the writing to develop the characters.

Tom Holland voices our main hero, Ian. It’s a bit of perfect casting by Pixar to have Holland play the shy, awkward character that must learn to control his newfound powers. Holland’s experience from his web-slinging days allows him to play to his strengths.

With the LEGO franchise and now this movie, Chris Pratt is starting to stake his claim as one of the best voice actors working today. Pratt plays the more rambunctious brother, Barley. His natural charisma enhances the material and creates some of the film’s funniest moments.

And as a bit of a bonus, the casting of Holland and Pratt in the lead roles give us a glimpse of what a possible Spider-Man and Star-Lord buddy movie would look like.

While it may not be the finest work Pixar has ever done, the abundance of heartwarming magic found within “Onward” makes it an enjoyable tale for all ages.